TEMPE – There is a lot on the table in this week’s matchup between two of the top teams in the Pac-12 South. Arizona State faces Utah at Rice–Eccles Stadium to determine the last unbeaten team in conference play.

Earlier this year, the Utah community was hit with devastating news following the Utes’ Sept. 26 victory over Washington State. Sophomore cornerback Aaron Lowe was shot and killed at a house party, the second Utah player to die in the last two years. Ty Jordan, a freshman running back, died in an accidental shooting on Dec. 25, 2020.

Lowe and Jordan were teammates at West Mesquite High School in Texas. Lowe was the first recipient of the Ty Jordan Memorial scholarship, created to honor Jordan’s legacy.

Before this season, Lowe changed his number from 2 to 22 to honor Jordan, who also wore No. 22. Lowe’s funeral service was Monday in his hometown in East Texas.

“I think they’ve done a great job of really handling this … hopefully today, they’re going to get some closure to it,” Edwards said. “But (Utah) coach (Kyle Whittingham) has done a really good job of really being the voice of speaking to young men. And that’s important when you get in situations like this.”

ASU wide receiver Bryan Thompson played at Utah for four years before signing an athletics grant and aid letter and transferring to Tempe. Edwards said he would speak with Thompson to make sure he is okay before the game.

The last time Arizona State played Utah at Rice-Eccles Stadium was in 2019, when the Sun Devils, ranked 17th, and the No. 13 Utes were both 5-1. ASU lost that game 21-3, the first of four straight losses for the Sun Devils.

The Sun Devils went 3-4 the rest of the season, and capped it off with a victory over Florida State in the Sun Bowl.

The 2019 loss at Utah lingers. Arizona State quarterback Jayden Daniels was playing in his seventh game as a true freshman. It’s still Daniels’ worst game, statistically, as he went 4-for-18 in passing attempts for 25 yards and one interception.

The 2019 matchup was also the last time the Sun Devils were held to under 150 yards in total offense.

“Two years ago, I thought we were out physically,” said Shaun Aguano, ASU’s running backs coach. “I was sitting back, and I was like, ‘Oh crap, you know those guys brought it to us.’

That Utah team was highly talented, with quarterback Tyler Huntley and running back Zack Moss both currently playing in the NFL. The Utes’ offense finished first in the Pac-12 in rushing yards per game (201.4), passing efficiency (174.05) and completion percentage (72.6%). 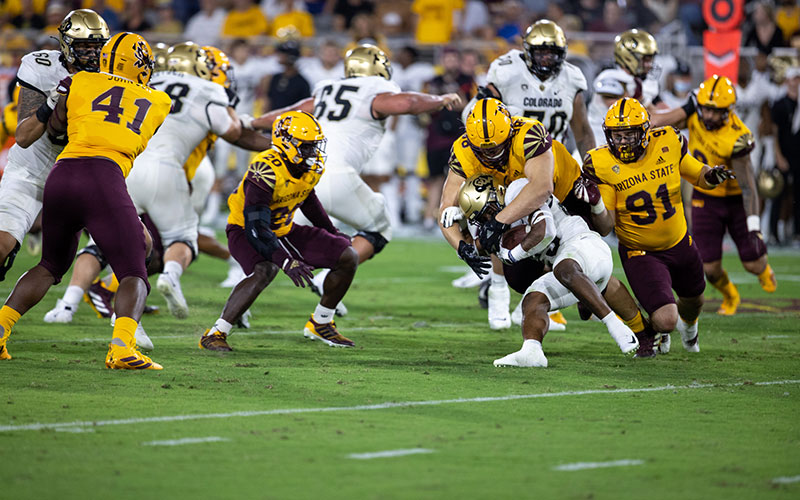 The ASU defense will be key in helping to combat a hostile Utes crowd. (Photo by James Franks/Cronkite News)

Under defensive coordinator Morgan Scalley, the Utes have ranked in the top 15 in the Football Bowl Subdivision for rushing defense the last three seasons.

Through five games this season, Utah’s rush defense is ranked fifth in the Pac-12 and is in the top three for total yards allowed.

ASU’s offense has been powered by its strong offensive line and running game. The Sun Devils are ranked third in the Pac-12 in rushing yards per game (212.0).

Aguano said there are differences between this team and the Sun Devil squad that went to Utah two years ago and lost.

“I mean, everybody can say every game is big,” he said. “We understand the importance of this one, and so I think (there are) different maturity levels, strength-wise. I feel that we are confident with our abilities to own the line of scrimmage.”

The Sun Devils have owned the line scrimmage against most of the teams they have played this season.

“I mean, they’re always a big physical group, that’s kind of their identity. But I think our offensive line is establishing that that is our identity as well so it’s going to be a heavyweight fight,” Arizona State offensive lineman Henry Hattis said. “We’re looking forward to it. We haven’t backed down from any challenge so far, so we’re looking forward to going in there and then showing them what we got.”

“I feel that if we can rush for between 220 to 300 yards a game, we’ll be pretty good. I think that we are capable of doing that,” Aguano said. “We’re going to start with the interior up front and then be capable (with) all of our running backs because there are three different guys that are fresh, and we talked about that all the time while keeping tread on their tires.”

The trio Aguano referenced are Rachaad White, who has 421 rushing yards; DeaMonte Trayanum, who has only played in three games this season but has 31 carries for 169 yards; and Daniyel Ngata, who has 37 carries for 237 yards.

White has scored a touchdown in eight straight games and has two or more TDs in five of those games.

Trayanum is tied for the lowest percentage “stuff rate” in the Pac-12, at 3.2%, amongst backs with at least 25 rushing attempts.

This season, Ngata has a first down or touchdown on 40.5% of his runs, which is the highest percentage in the Pac-12.

The fourth back who isn’t mentioned as much is Daniels, the quarterback. He is ASU’s second-leading rusher with 369 yards on 55 attempts. In six games, Daniels has already surpassed his career-high for rushing yards in a season.

ASU will be going into a hostile environment. Utah has sold out Rice-Eccles Stadium for 66 consecutive games, dating back to the 2010 season opener. The Utes are riding an 11-game home winning streak and they’ve won 15 of their last 16 home games.

The Sun Devils have lost two of the last three games they have played there.

“Tough place to play, a really tough place. They have a nice fan base. We anticipate it will be loud,” Edwards said.

A win would keep ASU undefeated in conference play heading into the bye week. It would also be the first time the Sun Devils have started a season 6-1 since 2007.