Eva van Deursen, who is from Veldhoven, Netherlands, is one of the team’s most experienced players. She leads the team in assists with six. (Photo by James Franks/Cronkite News)

PHOENIX – Despite being a diverse, global group, the Arizona State women’s soccer team has developed a culture that’s a key to its success. Even with the pandemic challenges of the past year, unity remained a priority.

That priority has paid off. The Sun Devils got off to a scorching 8-1 start to the season and climbed as high as No. 15 in the United Soccer Coaches NCAA Division I rankings before they opened their Pac-12 season with a 2-2 tie at Washington on Sept. 24.

They’ve suffered two subsequent conference losses but hope to bounce back Sunday against Oregon in Eugene. ASU has the talent, and much of it comes from the 13 international players on a deep, experienced 31-player roster.

Douglas and defender Lucy Johnson are from England, and the team has players from Iceland, New Zealand, Brazil, Mexico, Japan, Canada and the Netherlands.

As a junior last season, Douglas notched a team-high eight goals. Through 13 games this season, she already has 14 goals after scoring both Sun Devils goals against the Huskies in the conference opener.

“I’m getting a ton of help from my whole team,” Douglas said recently. “It’s a striker’s job to put the ball into the back of the net, but I can’t do that without the help of my teammates, who have been brilliant.”

Before coming to ASU, Douglas was a member of the Chelsea Ladies Club team and the Women’s English National Team.

“Chelsea is my childhood club,” said Douglas, who’s from London. “I started at age 6 and worked my way through the ranks of the academy. It’s a club that still holds a special place in my heart. But I’d been with them for 11 years, so coming here was because I wanted a change.” 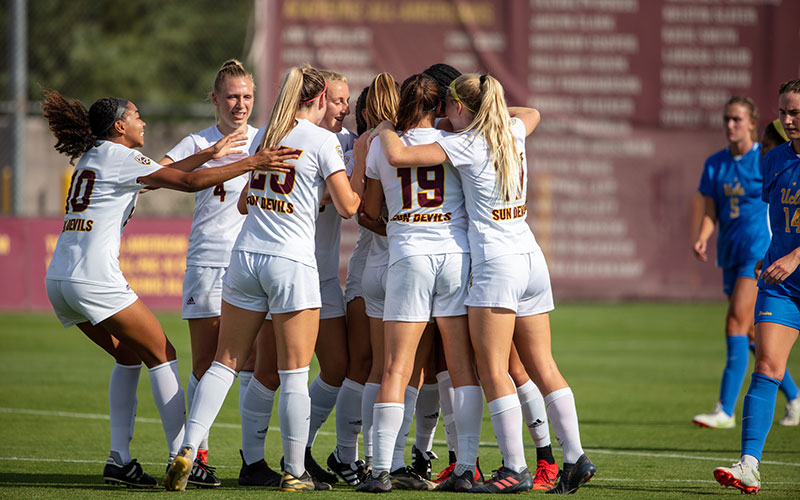 The Arizona State women’s soccer team has an international personality with players from all over the world. (Photo by James Franks/Cronkite News)

The transition to ASU was a simple one, she said, because of the style of play under coach Graham Winkworth, who got his coaching start in England.

“The way I played at Chelsea is very similar to how we play here, so the transition for me was actually pretty easy,” Douglas said. “I wanted a new challenge. I wanted something different. And Arizona State has been the place that has challenged me, and it’s been a good challenge.”

Although not as experienced as Douglas, Johnson, a sophomore defender, is quickly building a name for herself on the team.

As a freshman, Johnson started in 11 games and played consistently. But she said she has worked to get better this season.

“I’ve really improved my physical presence on the pitch,” Johnson said. “There’s more of an emphasis on the physical side of the game here than there is in England, so I’ve worked hard at that aspect.”

Playing for Leicester was great exposure for Johnson, but she wanted more playing time and hoped ASU would provide a chance to get on the pitch.

“I think coming here (Arizona State) is a big opportunity to grow and develop even further,” she said. “I was unsure about coming here, just because it was so far away from home. However, my dad reminded me that this would be an opportunity to play soccer every day and get to meet new people from around the world.

“The coaches are fantastic, and they have good relationships with the players. I’m learning a lot from everyone.” 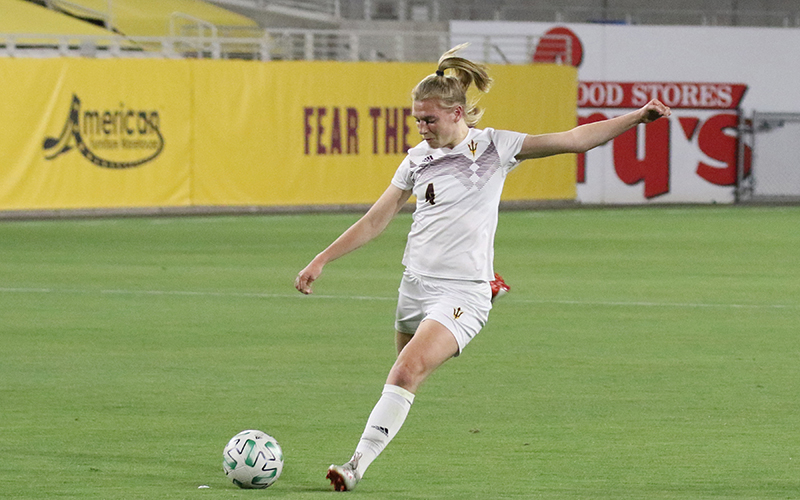 Johnson said she was one of the youngest players on the Leicester City roster.

“I was just trying to improve every training session and learn off the older players within the club,” she said.

And she continues to lean on more experienced teammates at ASU, playing alongside powerhouse defenders such as Callie Darst and Lieske Carleer, both juniors.

“A real vocal leader that I look up to is Lieske Carleer,” Johnson said. “She’s so direct, and everyone listens to her because she has such a big, respected role in our team.”

Johnson said everyone is involved in leadership – on and off the pitch.

“I think we’re all motivators for each other,” she said. “We’re all talking to each other, even the energy on the bench is incredible and positive, which massively helps the team.”

That developing culture within a “tight-knit group” is showing up in the team’s results, Johnson said.

“We’ve put a lot of time and effort into the culture here,” she said. “And I think It’s paid dividends for us.”