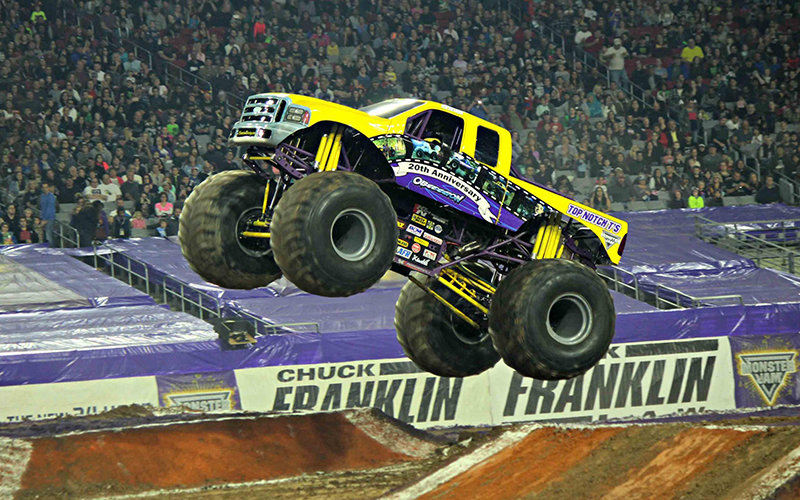 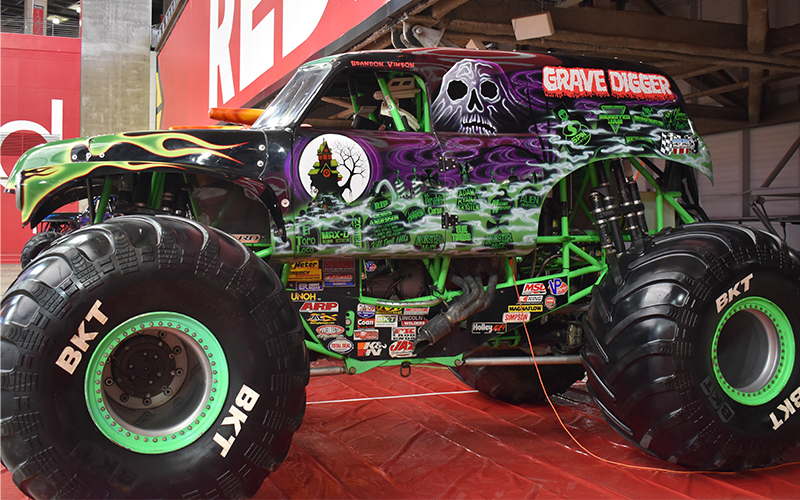 Monster Jam fans have their favorites, and Grave Digger is one that has a loyal following. (Photo by Nicholas Zeller-Singh/Cronkite News)

GLENDALE – When the COVID-19 pandemic struck, the high-octane Monster Jam circuit sputtered across the country.

Monster Jam features world-class monster trucks competing in races, skills and freestyle competitions with full-throttle performances across the U.S. and Canada. Drivers compete for points – and money – at each event to earn a spot at the Monster Jam World Finals.

Although the drivers continued to compete during the pandemic, the atmosphere was challenging. Like other sports, fans play a big role and competitors are fueled by the energy of a live crowd.

For Monster Jam’s 2021 season, fans were welcomed back to some venues with 100% capacity available, including Glendale’s State Farm Stadium.

“When the fans are going nuts and waving signs, that’s when the drivers look at each other and know this is going to get real,” Leduc said.

Leduc and his fellow competitors punched up the action when the fans turned up their volume. And after competing in the racing event, the drivers faced off in the skills competition. Unlike other sports, fans get to take part by judging the drivers’ performances in the skills and freestyle competitions via their smartphones. 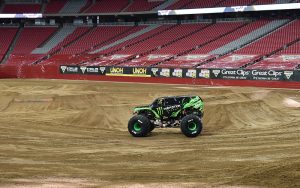 Even though the fan input puts more pressure on drivers during the skills and freestyle competition, the competitors prefer the added pressure to an empty stadium.

“Doing a competition without the fans is so hard for me because I feed on the yells and screams,” Monster Mutt Dalmation driver Cynthia Gauthier said. “You can tell if you are doing good because, if they are not yelling, you are not going big enough.”

Despite crashing in the racing event, Gauthier returned in the skills competition with an eye-catching donut performance, giving her a third-place finish in the skills segment.

“The fan judging has been awesome and fair so far,” Gauthier said. “You just have to impress the fans by being creative, filling your time, and come up with new tricks to get that victory.”

“The NASCAR and Monster Jam fans are pretty close,” Dragonoid driver Camden Murphy said. “The Monster Jam age range of fans is much larger but any motorsports fan is a fan of all other motorsports.”

Besides a strong NASCAR influence in the Valley, which means a lot of enthusiastic racing fans, several drivers believe Arizona also boasts one of the best venues on the Monster Jam circuit. 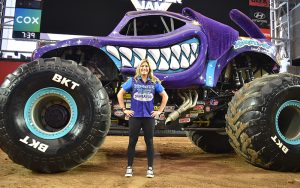 Cynthia Gauthier, the driver of Monster Mutt Dalmation, said she loves the palm trees and fan atmosphere at State Farm Stadium whenever she is in Arizona. (Photo by Nicholas Zeller-Singh/Cronkite News)

“I love it out here with the palm trees and the atmosphere,” Gauthier said. “People love racing here, and I have never seen this stadium empty. It’s always packed, and I think we might have the World Finals here one day.”

“State Farm Stadium is absolutely beautiful,” he said. “When we have 10,000 fans screaming and cheering, it’s absolutely awesome.”

Although Monster Jam has opened up venues to 100% capacity, there are still some limitations for fans.

Since Arizona has looser restrictions, Covid-19 protocols were not as strict as at other Monster Jam events. In some states, masks and a temperature check are mandatory and some seats may be blocked off to meet social distance guidelines.

In Glendale, masks were encouraged but not required, seats were not blocked off and there were no temperature checks at the gates.

However, there were some limitations for the “Pit Party” during the event at State Farm Stadium.

According to Murphy, Monster Jam provides the Pit Party to allow drivers to interact as much time as possible with the fans. However, fans were not allowed to make contact with any drivers or get autographs.

Gauthier believes the new setup is actually working out better than the old routine.

“The Pit Party is almost better this year because instead of just signing autographs, we are actually talking to people and spending more time to answer questions,” Gauthier said. “It’s a different atmosphere, but we get to be closer with the fans.”

Monster Jam returns to Arizona March 25th-27th at the Tucson Arena, a venue that seats about 9,000 people located on the Tucson Convention Center campus.