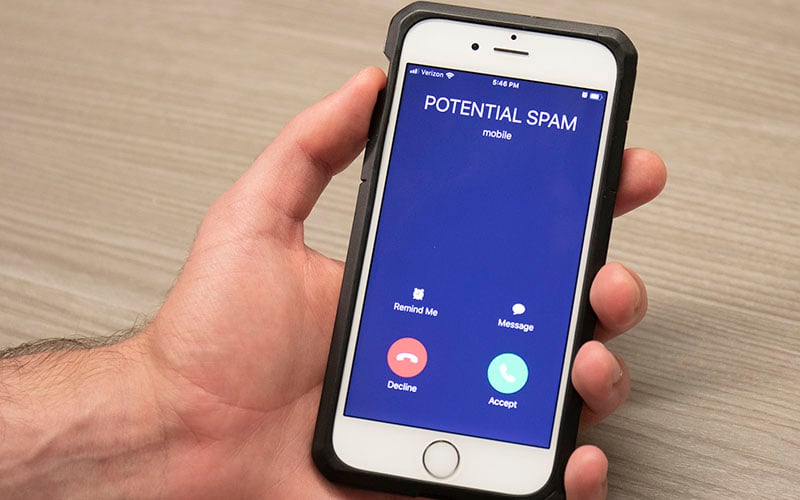 New FCC regulations may have led to a reduction in robocalls, which fell from 87.6 million in Arizona in June to 84.2 million in July. But analysts say phone companies can, and should, do more to cut the number of spam calls. (Photo by Genesis Sandoval/Cronkite News)

WASHINGTON – Robocalls to Arizonans dropped by more than 3 million in July, to about 84.4 million for the month, as the first phase of a new federal mandate took effect that requires phone companies to implement anti-robocall measures.

But consumer advocates say phone carriers could be doing more.

A report last month by the U.S. Public Interest Research Group Education Fund found that just 16 of the 49 largest phone companies in the country had fully implemented the STIR/SHAKEN technology by a Sept. 28 deadline, and another 18 had partially implemented it.

In Arizona, of the 18 that reported to the Federal Communications Commission, seven said they had completely integrated the system and 11 had partially done so. Another provider in the state had not reported to the FCC by Sept. 28, USPIRG said.

The FCC regulation gave the five largest carriers a June 30 deadline to install the STIR (Secure Telephone Identity Revisited)/SHAKEN (Signature-based Handling of Asserted Information Using toKENs) system, which lets providers authenticate caller ID in an attempt to reduce spoofed robocalls. Smaller carriers were given until Sept. 28 to report their progress on the new program.

The FCC did not respond to calls on the progress of the providers. But Diane Brown, executive director of ArizonaPIRG Education Fund, said the companies are falling short.

“Our research documented that over half of the companies that reported their status to the Federal Communications Commission were not using the industry standards, but instead were using their own methods to manage robocalls,” Brown said.

“Companies should always use the highest standard to protect consumers,” which Brown said is STIR/SHAKEN.

That was echoed by YouMail CEO Alex Quilici.

“It’s definitely not enough for these guys to create their own plan,” said Quilici, whose company tracks spam and robocalls.

“Some of the plans that have been filed with the FCC are just, ‘We promise to look out for bad robocalls and to stop them,’ and that’s the extent of it,” he said. “Just having a carrier file a plan saying, ‘I promise to be a good guy,’ isn’t going to cut it.”

Lumen Technologies, which operates in Arizona as CenturyLink, said in an emailed statement that it understands the frustration with illegal robocalls and is working to stop them.

“We have rolled out STIR/SHAKEN call authentication technology on the IP (internet protocol) portions of our network, which enhances the speed and effectiveness of the traceback initiative,” the statement said. “This makes it easier than ever before for authorities to identify and pursue illegal robocallers, while also helping consumers be confident that calling parties are who they say they are.”

The statement went on to say that the company shares “our customers’ frustration with fraudulent and unwanted automated telephone solicitations and are committed to doing our part to stop these annoying and harmful calls.”

YouMail said that more than 4 billion robocalls were placed to U.S. phone lines in September, with 84.4 million of those in Arizona. Calls in the state have fallen since 2019, when they peaked at 1.1 billion for the year, a drop Quilici attributed to efforts by law enforcement to crack down on fraudulent calls.

Not all robocalls are illegal, but the ones that are can be costly as well as frustrating.

“A legal robocall is one that a consumer opts into, such as a prescription is in, a child’s school is closed, or an airline flight is delayed,” Brown said. “Illegal robocalls are designed to scam or commit fraud to a consumer.”

Robocallers will often utilize caller ID spoofing, which lets callers disguise their identity with a fake number. That includes what the FCC calls “neighbor spoofing,” which makes a scammer’s call appear to be coming from a local phone number that people are more likely to answer.

YouMail found that 31% of Arizona robocalls in September were from scammers.

In a June statement, the FCC said the new standards should help identify bad actors.

But Quilici said the FCC rules are just one step. Really stopping robocalls will require a combination of efforts, he said, like consumers using apps to prevent robocalls, systems that track scam callers and authorities punishing scammers once they are caught.

“Regulation has never solved a technology driven problem,” he said. “The problem here is that it’s easy and cheap for just about anybody to make large numbers of robocalls.

“You need enforcement, you need technology, you need consumers changing their behavior, and you need regulation. None of those on their own are going to solve the problem,” Quilici said. “What you’ll see is over time all of those all together will put pressure to make it harder and harder for the bad guys to be successful.”