After more than 600 days, ASU swim team grateful for return to competition 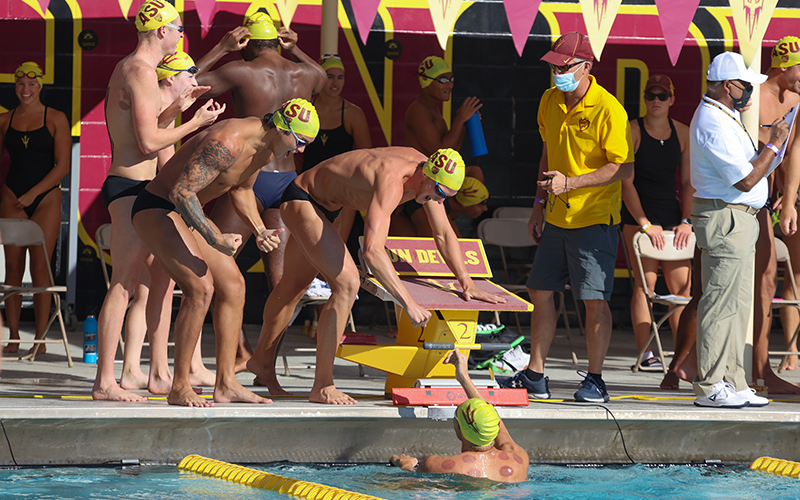 One reason ASU swimmers were so excited to compete again is because they all redshirted for the 2020-21 season because of the COVID-19 pandemic. (Photo by Mary Grace Grabill//Cronkite News) 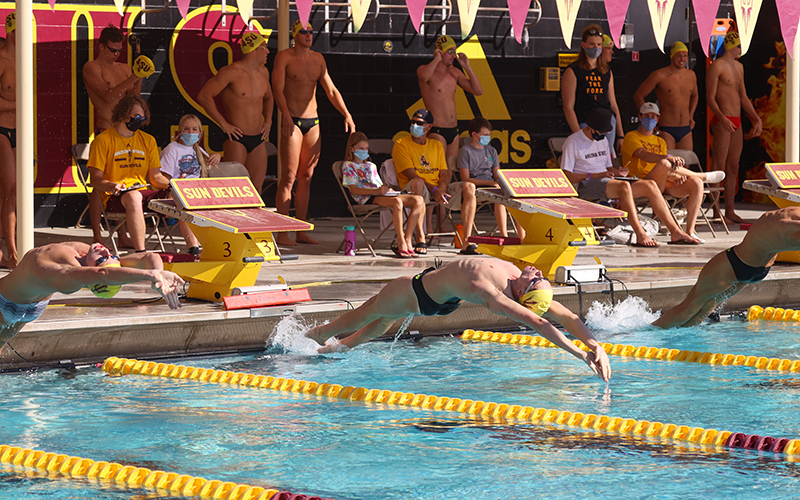 The ASU swim team was happy to return to action in the Maroon & Gold Intrasquad meet Friday after more than 600 days away from the pool. (Photo by Mary Grace Grabill//Cronkite News) 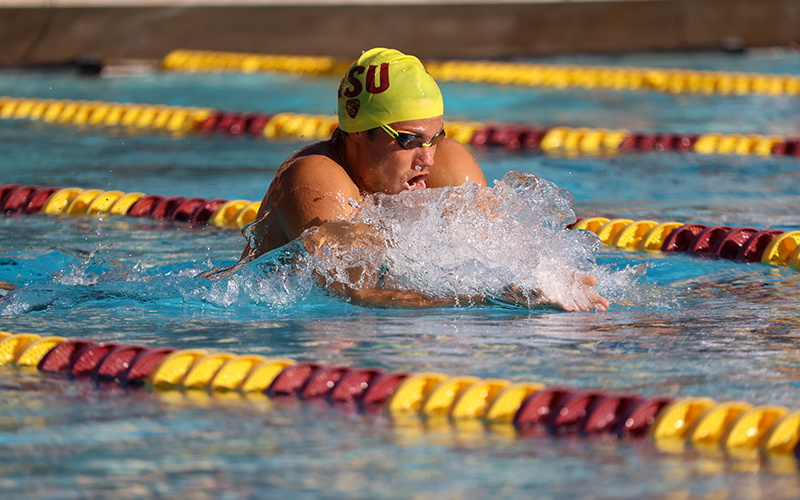 ASU’s David Schlicht was among the swimmers that participated in five consecutive events to prepare for the rigors of the NCAA season. (Photo by Mary Grace Grabill//Cronkite News)

TEMPE – The wait is finally over.

After redshirting the entire team for the 2020-21 season because of the COVID-19 pandemic, ASU coach Bob Bowman finally got to watch his athletes compete at the Mona Plummer Aquatic Center in their long-awaited return to the pool.

“It was really great to be back in action at our home pool in a collegiate setting,” Bowman said. “We have so many new people that I haven’t seen swim, including last year’s freshmen and this year’s freshmen, in a meet like this. It’s really fun to have everybody swim the full program of events and just kind of get a feel for where they are.”

Each swimmer participated in five consecutive events to prepare for the rigors of the NCAA season. Many of the invitational meets swimmers compete in when they are young tend to have an allotted time between events to keep the athletes in a “fresh state,” Bowman said. 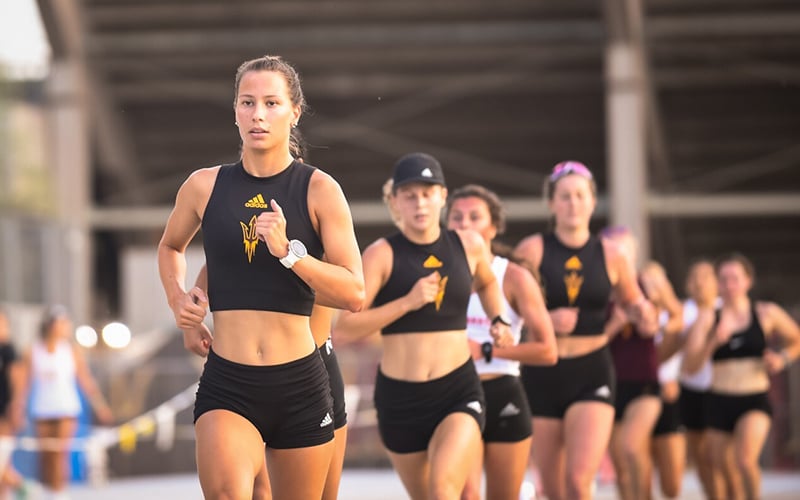 “One of the things you have to do in collegiate meets is swim a number of events back-to-back,” he said. “This was a great chance to swim five things in about an hour and a half, maybe a little less, and feel what that’s like. Here, you have to keep going even when you’re tired, even when you have lactic acid buildup. It’s just a great lesson for them to learn what it’s going to be like.”

The scrimmage gave the coaching staff an opportunity to evaluate the development of each swimmer heading into the season.

If anything is clear after a tumultuous 600 days, it is that the Sun Devils have a bright future.

During the scrimmage, many athletes stood out in what was their first collegiate meet, including redshirt freshman Elli Straume and Australian freshman Charli Brown. In her first collegiate-level event, Brown performed well to the cheers of the team and was surprised by the camaraderie of the group.

“I love racing with this team,” Brown said. “The environment is amazing. I’ve never experienced something like this and just having everyone up cheering for each other is something new to me. I’m so grateful to be here racing with the team.”

Bowman cited the team’s mix of young talent and veteran swimmers as one of the main reasons he feels confident about the program’s future. With 11 All-Americans returning from the 2019-20 season, the Sun Devil squad boasts an immensely talented roster.

“For this upcoming season, it means our team is really good,” Bowman said. “We saved some talent, and some very experienced people are going to come back and help us out.

Not only will the veterans’ experience translate to competitive success, but they will also help the development of younger swimmers on the roster, such as Brown.

“I’m so honored to be here and racing with some of the best in the world,” Brown said. “I’ve never experienced anything like this. The whole team atmosphere is another step up. Training and then racing alongside them, it’s crazy to see what they can do. I push myself against them and just have a good time.”

Making waves in their ASU debuts on Friday were freshman Léon Marchand and redshirt freshman Jarod Arroyo, both of whom competed in the 2020 Summer Olympics in Tokyo. 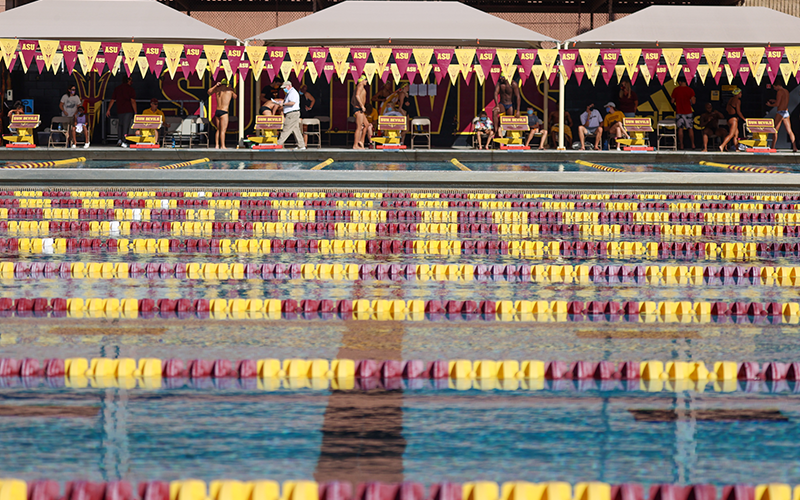 The ASU swimming program kicks off its 2021-22 season with its annual Maroon & Gold Intrasquad scrimmage at the Mona Plummer Aquatic center. The scrimmage was the Sun Devils’ first collegiate swim meet in over 600 days. (Photo by Mary Grace Grabill//Cronkite News)

On the women’s side, redshirt sophomore Lindsay Looney and redshirt senior Emma Nordin had successful outings. Both Looney and Nordin competed in the U.S. Olympic Swimming Trials during the summer and were recently named to the 2021-22 USA Swimming National Team.

“Having Olympians both on the men’s and women’s team, it just helps create that motivation for everyone to strive to be like that,” Arroyo said. “It wouldn’t surprise me if we had a couple Pac-12 and NCAA champions coming up here soon. Having the Olympians on the team, it helps motivate everyone as a whole. Overall, I think it’s just a super-positive environment.”

One of the driving forces that influenced Arroyo’s decision to commit to ASU was to join and help grow Bowman’s desired “culture of excellence,” and he feels that the program is fully ready to go this season.

“I feel very confident,” Arroyo said. “Having the guys that I’m able to train with right now – like Leon, David (Schlicht) and Grant (House) – having them to swim with every day is such a blessing for me because it creates a very competitive environment in practice. That’s how champions and winners are made.”

According to Bowman, the presence of Olympic-level athletes such as Marchand and Arroyo raises the overall standard for swimmers and coaches alike, and it sends a message to future recruits that these are the types of athletes that the ASU swimming program wants.

Those elevated standards were evident throughout the team’s performance during the scrimmage.

However, Bowman understands that he still needs to coach up some of his swimmers for them to reach their potential.

With the redshirt freshmen and true freshmen competing in their first collegiate meet, there were a few hiccups from the younger swimmers. It’s all part of Bowman’s process.

“I think the young guys on the team, and ladies, we want them to be free to fail,” Bowman said. “A lot of them got nervous. They got up and swam the first event, and they swam kind of tight and nervous. If you’re going to fail, fail big. That’s OK. You’ll learn something from it, and we’ll move on.

“What I want them to do every time they get up there is to know that they’ve got support behind them and that they’re prepared to swim. If they do that, they’re going to learn a lot, and that’s how they’re going to climb the ladder.”

The Sun Devils now enter the season with an extra year of development and another talented freshman class to build upon.

The program has seen consistent improvement throughout Bowman’s tenure, and after navigating a lost season due to COVID-19, the squad could be ready to make a huge leap.

“I’m very confident,” Bowman said. “We have a great group of guys. If they stay healthy and are able to consistently train, I think we’ll have some very good times by the end of the year.”