Manuel Madrid is one of eight players with Hispanic roots on the Rising. (Photo by Harrison Zhang/Cronkite News) 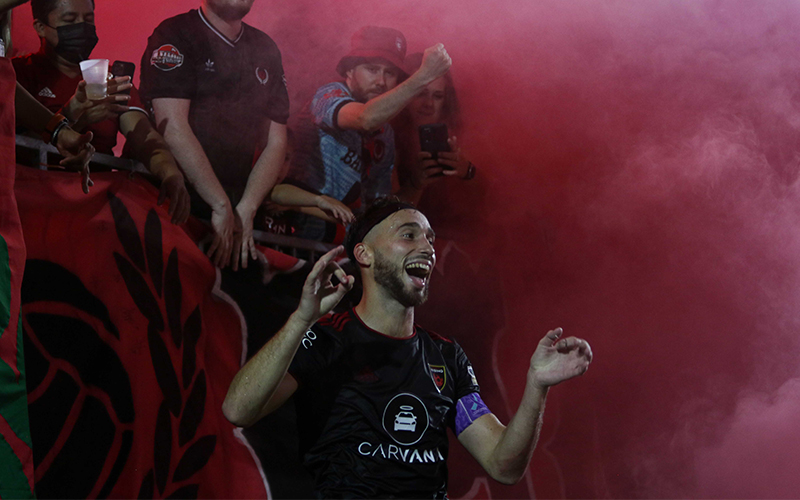 PHOENIX – Mezcla. In Spanish, the word means “mixture” or “blend,” and it applies to many Hispanics in the United States who are trying to blend into American culture while embracing their own.

The pair are two of eight players with Hispanic roots on the Rising, including Jon Bakero, David Loera, Edward Delgado, Luis Seijas, Ivan Gutierrez and Manuel Madrid. The group has made an impact on a team that is 17-3-5, and on Saturday became the first team in the USL Championship to qualify for the 2021 postseason.

Moar leads the team in goals with 14 and is one of the most dynamic attacking players in the Championship all season. He is also third in the league with 55 shots.

Rodriguez, a midfielder, was born in San Luis Potosí, a city of more than 800,000 people in central Mexico. He lived there until he was 15 when his family relocated to the U.S. to look for work and a better life.

Rodriguez attended his last two years of high school in Texas, a period of time that is challenging to any American teenager. It was even more difficult for Rodriguez, who did not speak any English when he arrived in Dallas.

He described the first day of his junior year as one of the most difficult of his life. He was a new student at Ranchview High, and he didn’t have the ability to introduce himself to any of his teachers or peers because of the language barrier.

“To arrive at my classes without knowing anything and everyone looks at me like, ‘How are we supposed to welcome you if you don’t know anything?’” Rodriguez said. 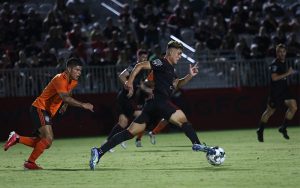 Arturo Rodriguez lived in San Luis Potosí, a city of more than 800,000 people in central Mexico, until he moved to the U.S. when he was 15. (Photo by Harrison Zhang/Cronkite News)

Hardly anyone spoke Spanish at Ranchview, and school was difficult for Rodriguez until he was able to find people who could communicate with him in his native language.

“I’m a little bit of both,” Rodriguez said.

He holds his Hispanic cultural values close, especially the ones he learned from his family. Two important principles he continues to live by include being a good person to everyone, no matter who they are, and respecting elders.

“They’ve helped me get to where I am today,” Rodriguez said.

Moar, a midfielder, grew up in a small farming town in Spain. His soccer roots were planted in Ordes, a municipality of about 12,600 people in the country’s northwest region, where playing the sport was common – even expected.

“When we were little, the only distraction that we had was to play soccer,” Moar said. “Growing up in the streets and on the field, we had a lot of opportunities to play soccer.”

Many Sundays in Ordes consisted of three things for Moar: attending church, enjoying Spanish delicacies and playing soccer. The local soccer teams competed Sunday afternoons, and it was tradition for people from the town to attend games.

Like Rodriguez, Moar arrived in the U.S. unable to speak English. His family was back in Spain, and he journeyed to the U.S. to play for Pfeiffer University, a small private college in North Carolina. 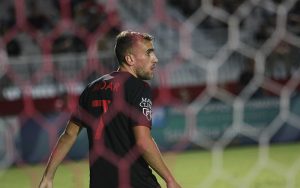 Santi Moar grew up in a small farming town in Spain where playing soccer was common. (Photo by Harrison Zhang/Cronkite News)

Although Moar and Rodriguez have adapted to American culture, they still find comfort in speaking their native language, which connects Hispanics in ways that are hard to find elsewhere.

“It gives you the liberty to go to certain places and converse with certain people and get to know more about those people,” Moar said.

Both Rodriguez and Moar gladly share Hispanic culture with their Rising teammates. Rodriguez enjoys dining with them at various Mexican restaurants as well as inviting them over to try homemade Mexican delicacies, including enchiladas and spicy salsas.

Playing cards was a tradition in Moar’s family, and he introduced the custom to his teammates who have happily participated, especially while traveling to away games. During his childhood in Ordes, Moar played cards with his grandfather after most meals. To Moar, playing cards was more than a game, it was a time where he was able to learn more about the people sitting around him at the table.

The connection Hispanic people forge with each other, Moar believes, is one of the most compelling aspects of the culture.

“The communication. The relationship between people,” Moar said. “I think that we have a very open relationship, with a lot of happiness and joy.”