WASHINGTON – It was supposed to be a confirmation hearing for Cindy McCain and former Arizona Sen. Jeff Flake, but their appearance Tuesday before the Senate Foreign Relations Committee sounded more like a family reunion at times.

McCain, whose late husband, John, served more than 30 years in the Senate, and Flake, who served on Foreign Relations, have been nominated to be ambassadors to the United Nations food programs and to Turkey, respectively.

They are also prominent never-Trump Republicans, who clashed with Donald Trump in 2016 and publicly endorsed President Joe Biden in 2020. But questions at the two-hour hearing tended more toward policy than politics, when they were not reminiscing about their histories with the nominees and the late senator.

“I can assure you when Cindy McCain shows up in a room anywhere in the world people already know her, they respect her,” said Sen. Lindsey Graham, R-S.C., a longtime friend of the McCains. “She would be a great face for America.”

Even the praise came in for praise: When Sen. Chris Coons, D-Del., introduced Flake as an “honorable man, as a principled public servant,” committee chairman Sen. Bob Menendez, D-N.J., called it a “great, grand show of bipartisanship at a time that is difficult to achieve it here.” 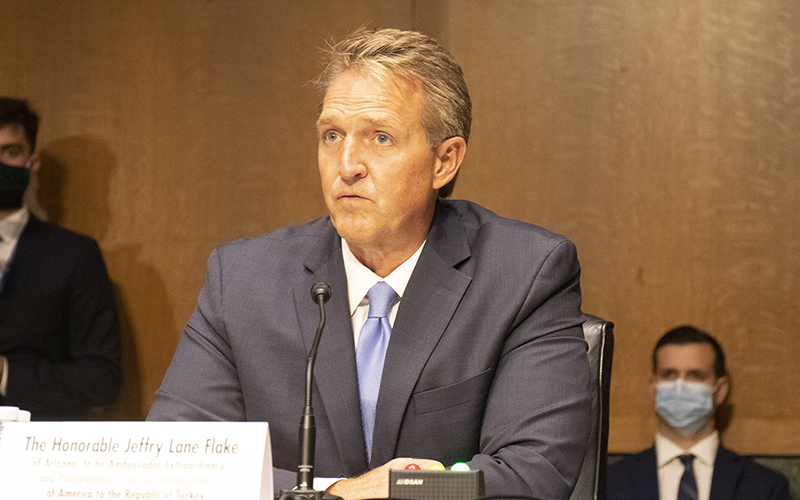 Former Arizona Sen. Jeff Flake testifies Tuesday before a friendly Senate Foreign Relations Committee as the hearing on his nomination to be the next U.S. ambassador to Turkey. (Photo by Genesis Sandoval/Cronkite News)

But senators did press Flake on how he plans to hold Turkey to account as ambassador while working to mend the frayed relationship with a country that had been a reliable ally.

Several senators asked about Turkey’s human rights records, with one noting that there are more lawyers and journalists in Turkish jails than in any other country. Most of the questions focused on Turkey’s purchase of a Russian missile system, in apparent violation of NATO rules, which has led the U.S. to halt delivery of F-35s the Turks had ordered.

The hearing came just days after Turkish President Recep Tayyip Erdoğan said in an interview that aired Sunday that he intends to buy a second Russian missile system, and just one day before he is set to meet with Russian President Vladimir Putin to talk about violence in Syria.

In his opening statement, Flake called Turkey an “indispensable ally” but conceded that its relationship with the U.S. “faces profound challenges” on a range of issues. He pledged to be firm with the regime, which has been hit with Countering America’s Adversaries Through Sanctions Act (CAATSA) trade restrictions over the Russian missile deal.

McCain generally faced easier questioning, with most senators prefacing their questions with stories about time spent with her or her late husband or both.

McCain, who is most closely associated with the fight against human trafficking, said she would use her appointment as ambassador to the U.N. Agencies for Food and Agriculture in Rome to “alleviate hunger and promote agricultural development to increase food access and stability” across the globe. 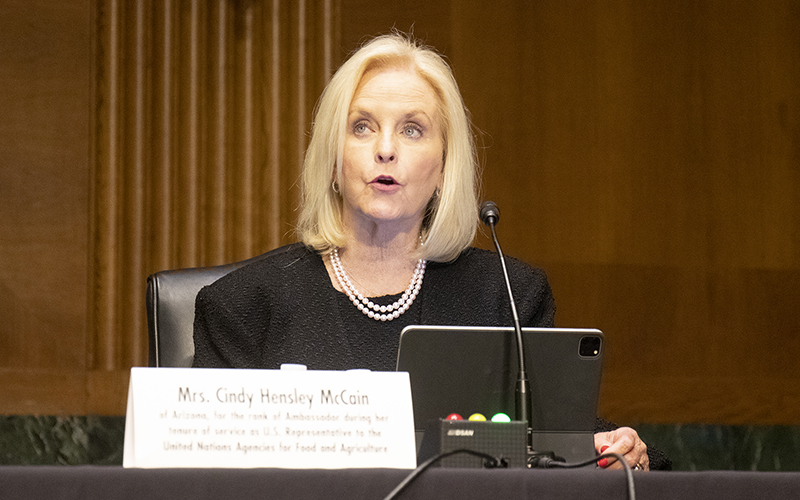 Cindy McCain, the widow of former Arizona Sen. John McCain, testifies Tuesday at the hearing on her nomination to be special ambassador to the United Nations Agencies for Food and Agriculture. (Photo by Genesis Sandoval/Cronkite News)

And she credited her late husband for inspiring her.

“John believed he had as much dignity as any other person on earth, but not one measure more, and he felt a personal responsibility to those of his fellow human beings who suffered oppression and deprivation,” McCain said. “Should I be confirmed, he would expect me to use my opportunity to serve the same end, and I will do my best to do so in the hope that he would be proud of me.”

McCain was asked by Sen. Todd Young, R-Ind., whether she would push for greater use of genetically modified crops to fight hunger, a goal she embraced.

When Young said it will take “robust and tenacious diplomacy” to convince some European nations to get on board with that, McCain promised she has the tenacity.

“I’ve been compared to a chihuahua before,” she said. “I bite the ankles and bark enough until people listen to me, so you have my commitment being not only determined, but one that will follow through and make sure people hear.”