A protester at the Justice for J6 rally in Washington last week, which drew a crowd of only a few hundred that was easily outnumbered by police. Organizers of a similar rally Saturday in Phoenix are also promising a peaceful and relatively small gathering. (Photo by Diannie Chavez/Cronkite News)

WASHINGTON – Organizers are downplaying expectations for a large crowd at Saturday’s rally in Phoenix to support the “political prisoners” arrested in the Jan. 6 assault on the Capitol – but they are not downplaying the seriousness of their cause.

The Justice for J6 rally in Phoenix comes a week after hundreds gathered in Washington to protest the treatment of more than 600 defendants – seven of them from Arizona – who they charge are being treated harshly because of their political beliefs.

“We just want to make sure our state legislators understand there are people who are going to take action,” said Julie Fisher, Arizona coordinator for Look Ahead America, which organized both events. “We are asking them to do something about these political prisoners.”

But at least one lawmaker, while he agrees that defendants need to be treated fairly, had little sympathy for those accused in the Jan. 6 insurrection.

“What they did was treasonous,” said Sen. Martin Quezada, D-Phoenix. “It’s one of the worst things that has happened in our country.”

More than 600 people, seven of them from Arizona, have been arrested in connection with the Jan. 6 attack on the Capitol that sought to disrupt Congress’ certification of the Electoral College vote that made Joe Biden president. 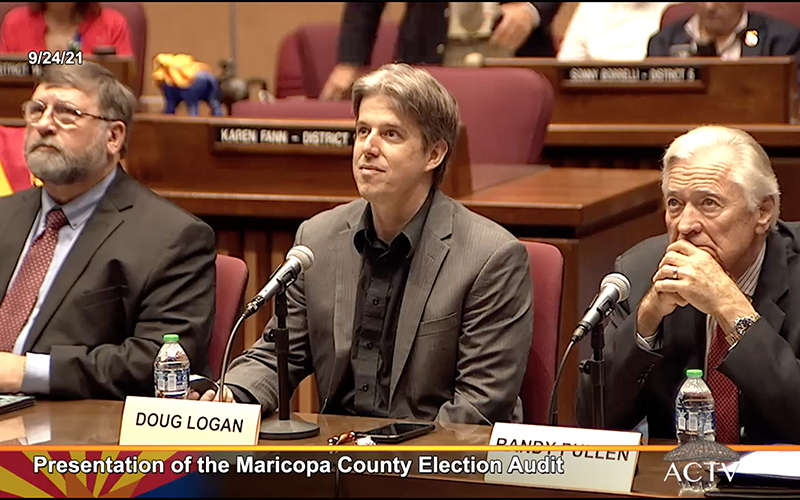 Thousands marched from a rally near the White House, where then President Donald Trump repeated his claims that the election had been “stolen by emboldened radical-left Democrats” and that “if you don’t fight like hell, you’re not going to have a country anymore.”

When the crowd reached the Capitol, it soon overwhelmed an unprepared U.S. Capitol Police force. While most remained outside, hundreds breached the Capitol, forcing Congress and the vice president to flee to safety. Five people died and hundreds were injured in the melee, which caused about $1.5 million in damage before additional police and troops brought the situation under control after several hours.

In the weeks and months afterward, police and FBI were able to track down hundreds of suspects through tips, police video and, often, video that the protesters themselves shot and posted to social media.

Of the seven people arrested from Arizona, just two still remain in custody: James Burton McGrew, who is charged with assaulting a police officer, and Jacob Anthony Chansley, the so-called “Q-Shaman,” who became a face of the insurrection.

Chansley is easily recognizable in videos and photographs from that day showing him in facepaint, a spear in his hand and a bearskin headdress with horns on his head. He signed a plea agreement earlier this month, pleading to “obstruction of an official proceeding,” one of the six charges he faced. The charge carries a maximum penalty of 20 years in prison, but the plea agreement cites Chansley’s cooperation and suggests a sentence of 41 to 51 months, when he is sentenced on Nov. 17.

Not as much progress has been made in McGrew’s case, which was “effectively at a standstill” after his attorney was hospitalized in late August, according to a court filing. The other five Arizona defendants are no longer being detained, but are expected to show up in court on their scheduled dates.

Other anticipated speakers include Rep. Mark Finchem, R-Tucson, and Rep. Walt Blackman, R-Snowflake, as well as Jeff Zink, a Republican running for Congress in District 7. Zink was at the Capitol on Jan. 6 with his son, Ryan Scott Zink, who was later arrested in Texas and charged in the insurrection.

Jeff Zink did not respond to requests for comment this week, but at last week’s rally in Washington he complained about how his son was treated in D.C. Jail, where he was held for six weeks before winning bail.

“We must bring light to what is happening to the prisoners and our fellow American citizens,” he said, adding that his son did not enter the Capitol but was still held in a moldy cell and went up to five days without shaving or showering.

Quezada said he agrees with Zink that there are problems in the prison system that do need to be addressed.

“I can’t say I disagree with that perspective because we do need to make changes,” he said, but he does not think those arrested in the Jan. 6 attack have been wrongfully charged. Even if they did not enter the Capitol, he said, they were all there for the same purpose and should be charged accordingly.

Organizers of last week’s rally in Washington had planned for up to 700 participants, but only about 200 turned out. Protesters were easily outnumbered by media and police, who were there in force in case of a repeat of violence at the Capitol, which was ringed with fencing for the day.

But last week’s rally was peaceful, as organizers had promised, and Fisher pledged the same for the rally Saturday at the state Capitol in Phoenix. Which she expects will be a similarly small-scale event.

“I can’t imagine there will be a lot of people on a hot Saturday afternoon,” Fisher said. “If we have 30-50 people, I’ll be pleased.”