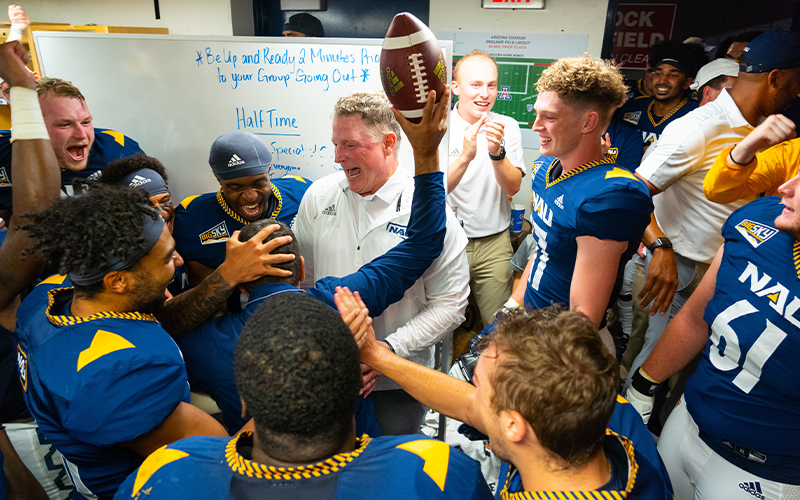 Even though Northern Arizona football players celebrated their big victory over Arizona, coach Chris Ball is making sure they are looking forward and not backward. (Photo courtesy of Wes Salonen/NAU Athletics)

PHOENIX – Energy and effort. Those two words echo through the minds of Northern Arizona players as they turn the page following their monumental win against the Pac-12’s Arizona Wildcats and prepare to open Big Sky play.

NAU’s comeback victory was its first against Arizona since 1932. It is the first time the Wildcats have lost to the Lumberjacks since Arizona entered what is now the Pac-12 Conference in 1978.

They’re ready to move ahead with the same “energy and effort” mantra that helped them stun the Wildcats. Those are words the Lumberjacks have lived by this season and that they will carry them into conference play, linebacker Harrison Beemiller said. Coach Chris Ball preaches those words because they are the two things players can control on the field, unlike a referee’s call, the weather and the decisions an opponent makes.

They maintained both against the Wildcats to hold off Arizona in only the fourth victory in NAU history against an FBS team since the NCAA divided into two divisions in 1978. It is the first time NAU has beaten any Power Five team.

“It really is a program win, not just for the sport of football but for our whole athletic program,” said Mike Marlow, NAU vice-president for intercollegiate athletics.

However, the Lumberjacks and their coaches insist they have already moved on.

“I wanted to go take the staff down and just sit and drink some cold beer and enjoy it a little bit more, but you just don’t have time to do that,” Ball said. “You’ve got to get ready for Northern Colorado and move forward.”

Ball is no stranger to beating the Wildcats. A former assistant coach at Arizona State, Ball was part of three victories over Arizona during his four years with the Sun Devils. And Washington State beat the Wildcats during Ball’s final season as defensive coordinator in Pullman.

Ball said he watched a recording of the game’s final drive, sealing the Lumberjacks’ victory, one final time and then put the upset to bed. He was determined to refocus and prepare for Big Sky Conference play, which begins Saturday for the Lumberjacks (1-2) when they visit Northern Colorado.

Still, Ball wasn’t downplaying the value of his team’s victory against Arizona.

“It gives you so much confidence moving forward,” he said.

The Lumberjacks were back on the field Sunday for practice without skipping a beat. Ball noticed the confidence in his players’ eyes and said they were bouncing around the field ready to keep their momentum going into conference play.

“You’d be surprised what winning does to the mental state of a football team,” Ball said. “It’s on us (as coaches) to maintain that.”

He aims to keep the energy high and intensity higher for practice this week. The coaching staff didn’t want to let up and allow the team to settle into complacency.

“One big thing we’re harping on this week is to turn the page, and we’re on to Northern Colorado. We can reflect on this victory at the end of the season when we have that Big Sky championship under our belt.” said Beemiller, who was named Big Sky Conference Defensive Player of the Week for his effort against the Wildcats.

“I think the first couple weeks we haven’t necessarily played with the type of confidence we needed to, so hopefully this fuels us going forward,” he said.

Now, Beemiller added, it’s time for the Lumberjacks to build on their first win of the season.

“The main goal is the Big Sky championship, so I just want to improve on all of the little things that will get us there – the leadership, the discipline, the hard work and the character it will take,” he said.

He isn’t resting on the Arizona upset.

“We can be better,” he said. “It wasn’t perfect, but it’s showing how good we can be. So now we just have to tap into that potential and keep going forward.”

Ball said the team’s fundamentals lacked in Saturday’s win, and that he will make that a priority moving forward. And Beemiller said the Lumberjacks were able to finish some big plays against the Wildcats when they stuck to their fundamentals. Beemiller, now in his third season, has assumed a leadership role for the team and said that some of NAU’s younger players were big contributors in the upset.

They “have stepped up and have a sense of maturity, which has been huge for our team,” Beemiller said.

Ball expects the leadership to step up even more now that he feels there is a target on the team’s back. He said the standard is higher now.

Ball senses that the Lumberjacks are buying in more to what the coaching staff is preaching because of the upset.

“You’ve got the kids’ ears now,” Ball said. “They’re really paying attention to what you say. They know what they’ve got to do to be successful.”