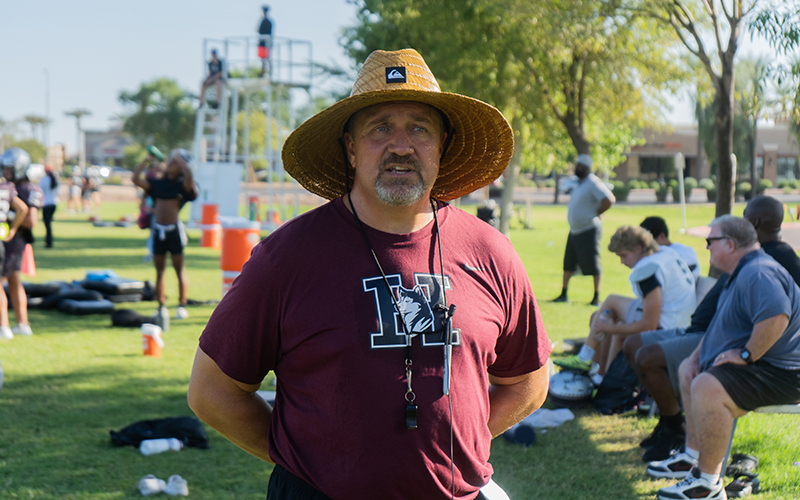 Hamilton High football coach Mike Zdebski told his players they’re “going to be in the history of football forever” because of the dramatic victory. (Photo by Julian Rosa/Cronkite News)

PHOENIX – Days after Hamilton High School’s miracle of a comeback that beat Las Vegas powerhouse Bishop Gorman, details of the remarkable rally were still filtering out as the story spread nationally.

USA Today, Sports Illustrated, Yahoo! Sports and ESPN.com were among the national publications that picked up the story.

“These kids know they’re going to be in the history of football forever because they’re haven’t been very many situations that have occurred like we were in on Friday night,” Hamilton coach Mike Zdebski told PHNX Sports. “You may never see it again for a long time.”

Bobby Carpenter, the former NFL linebacker serving as ESPN’s analyst for the game broadcast, was reminded of another miracle in the 2013 NBA Finals game between Miami and San Antonio.

“It was like the Miami Heat game,” Carpenter said. “It’s like Game 6 when Ray Allen hit the 3. People were trying to get back in the game. People had gotten up and walked out.”

It’s true. Hundreds of Miami fans exited the arena early only to have the Heat rally to force overtime on Allen’s 3-point shot in the final seconds. Miami won the game, but the fans were locked out.

If any Hamilton fans headed to the parking lot early, they would never admit it.

And the scoring summary doesn’t begin to tell the story missed.

For instance, there was video that captured Huskies quarterback Nicco Marchiol vomiting as he took the snap and then fired a 22-yard pass to Nick Switzer for the touchdown that pulled Hamilton to within a point. Despite his stomach issues, Marchiol still managed to run for the go-ahead two-point conversion.

To even get to that point, the Huskies had to recover the pair of onside kicks. It turns out it’s something they work on regularly, and Hamilton even has an onside specialist, kicker Jacob Medina.

“I just kept thinking about what my coaches have been telling me since the beginning of the year,” Medina said Monday. “Stick to your craft, believe in yourself and just do your job.” 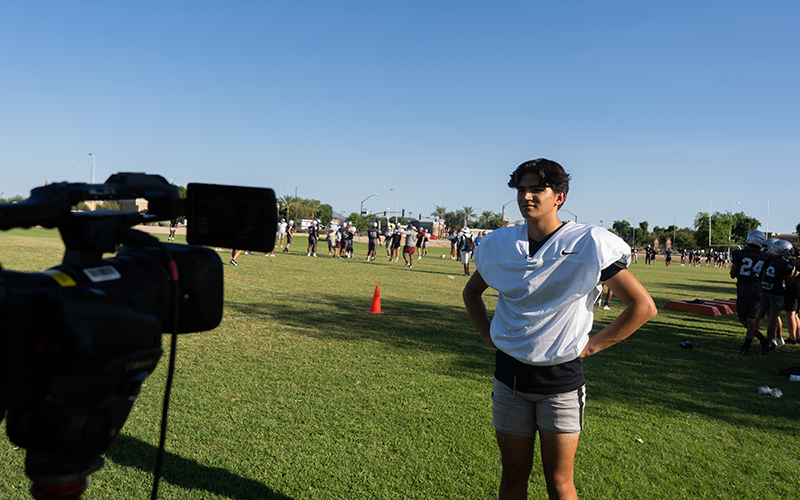 Crazier still, the same guy recovered both of the onside attempts. When AzSportsNetwork identified him on Twitter, junior cornerback Cooper LeDuc retweeted: “Thank you for the acknowledgement!!! It was a great night!!!”

Prior to the wild final 70 seconds of the game, not much had gone right for the Huskies. They amassed only 90 yards of offense in the first half, while Bishop Gorman racked up 220 yards and led 17-7 at the half.

Medina’s preparation for the situation the Huskies found themselves in paid off in those final seconds.

“His game was phenomenal. How often are you saying the kicker’s name?” Carpenter said. “He had one extra point and then the kickoff on the opening drive, and then we really didn’t talk about him until the last minute of the game.

“It was absolutely amazing, because the thing is, he kicked it about eight yards and it popped up. And that’s the trick to the onside kick … He put the right English on it, and it was very impressive.”

Somehow, LeDuc slipped through to recover the ball, which replays showed was surrounded by five Bishop Gorman players as it bounced.

Four plays after the first recovery, Marchiol found wide receiver Michael Masunas for a one-yard touchdown to cut the deficit to 24-17 with 29-seconds remaining.

Then Medina had his number called again, this time with the feeling of a comeback hanging in the hazey air.

He delivered again, with LeDuc again somehow slicing through to come up with the football.

“I was just thinking ‘do my job.’” Medina said of the onside kicks. “I had trust in my teammates. I did my job. I knew they would do theirs.” 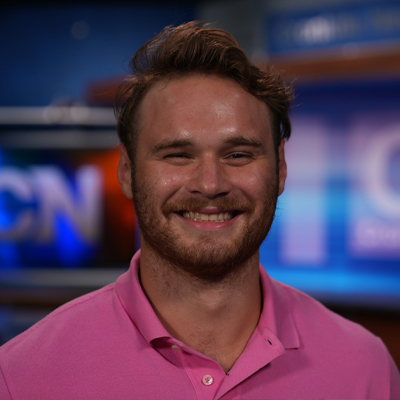