A day after he was named league MVP, Rattlers quarterback Drew Powell struggled in the United Bowl against Massachusetts. (Photo by James Franks/Cronkite News)

PHOENIX – Sports by nature create a roller coaster of emotions. During the United Bowl, Arizona Rattlers quarterback Drew Powell rode the highest highs and the crushing lows of that coaster.

Throughout the Indoor Football League season, Powell was one of the Rattlers’ key pieces. On Saturday, he was named league MVP after leading the Rattlers to the top seed and home-field advantage throughout the playoffs.

But the very next day, on indoor football’s biggest stage, Powell turned the ball over three times in the United Bowl, including an overtime fumble near the goal line, in a 37-34 overtime loss to the Massachusetts Pirates.

On the first overtime possession, the Rattlers were on the doorstep, looking to take their first lead of the game. On a designed quarterback rushing play from inside the 10, the ball popped out of Powell’s hands and was recovered by the Pirates.

“The ball went instead of my body,” Powell said after the game, noting he was reaching for the goal line to try and break the plane.

Garrett Hartley then drilled a 31-yard field goal for the 37-34 win, handing Massachusetts the title.

Although Powell was honest and hard on himself in his postgame comments, Arizona coach Kevin Guy emphasized that the final outcome could not be placed on one player.

“We win and lose as a team. We’re not pointing any fingers,” Guy said.

Over 14 games in the regular season, Powell led the IFL in rushing yards, rushing touchdowns and completion percentage, cementing himself as the premier IFL dual threat quarterback. In addition to winning MVP, Powell was named second-team All-IFL.

“You never know what’s going to happen,” offensive lineman Jahair Jones said about blocking for Powell. “He’s going to throw the ball, he’s going to run the ball. He’s just electric. … He knows the system and where everything is, and he just goes.”

Powell, in his second season with Arizona, helped guide the Rattlers to a 12-2 record and two playoff victories heading into Sunday’s championship game. The stage was set for a remarkable finish to a storybook season. 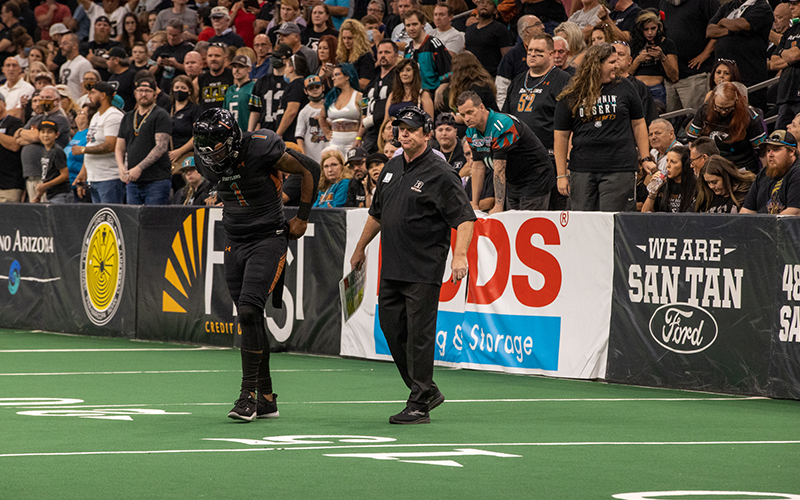 Instead, under the lights at Footprint Center, the Rattlers struggled against Massachusetts’ top-ranked defense. The Pirates held Arizona to just 205 total yards and 34 points, the Rattlers’ second lowest scoring output on the season.

The final result overshadowed an improbable last second rally in regulation. Down 34-27 with 26 seconds left, Lamar Mady, in his final career game, blocked a field goal and the Rattlers returned it inside the 5.

Powell tied the game two plays later with a rushing touchdown on a scramble with just 10 seconds remaining, sending the United Bowl into overtime for the first time in its existence.

It didn’t end in the Rattlers’ favor.

This was the second straight season that the Rattlers have hosted, and lost, the United Bowl. In 2019, they lost to Sioux Falls at Gila River Arena in Glendale. (The 2020 season was canceled because of the pandemic.)

The team’s quest for a seventh title continues, and Powell is looking forward to earning his second championship. He won the United Bowl with the Iowa Barnstormers in 2018.