Chandler High wanted to test itself against the best and captured a 17-7 victory over Cherry Creek, which flew over 600 miles for the game. (Photo by James Franks/Cronkite News)

The Wolves prevailed 17-7 behind a defense that intercepted Cherry Creek quarterback Christian Hammond three times, but the meeting was about far more than wins and losses.

“It’s all about trying to elevate and raise the bar and playing top teams and challenges,” said Chandler coach Rick Garretson. “We challenge our kids and get them in a tough environment where down the road it helps us. Playing these top schools like Cherry Creek is a win-win situation for both sides.”

Top high schools around the country are scheduling distant opponents to help up their game. The benefits are vast, coaches say, but it does not come cheap. Many schools in Colorado, for example, are traveling to talent-rich Florida and get help from companies like KSA Events. The prep sports travel agency books all-inclusive trips that will include flight, hotels and entertainment. It can cost about $1,800 a person, a company spokesman told the Denver Post, with fundraising often required to help pay for trips.

Chandler is among Arizona’s elite, extending its winning streak to 38 games and snapping a 25-game streak for the Bruins, who are two-time defending state champions in Colorado. The Wolives have won five straight state championships (three in 6A and two in Arizona’s Open Division), and are ranked No. 12 in the most recent MaxPreps Top 25 National High School Football Rankings.

The Wolves have made a tradition of testing themselves outside of the state. For example, they traveled to Corona, California, to face California’s Centennial High. They lost that game, but went on to win a state title. In 2019 they traveled to Henderson, Nevada, and beat powerhouse Liberty High.

The COVID-19 pandemic prevented the Wolves from scheduling an out-of-state foe last season, but when the opportunity came this year to play Cherry Creek, Garretson jumped at it in hopes of giving his players a building block toward another title.

“Every game we play is a big game,” Garretson said. “There’s no difference in that sense as you only get to play 10 a year and nothing is guaranteed after that.” 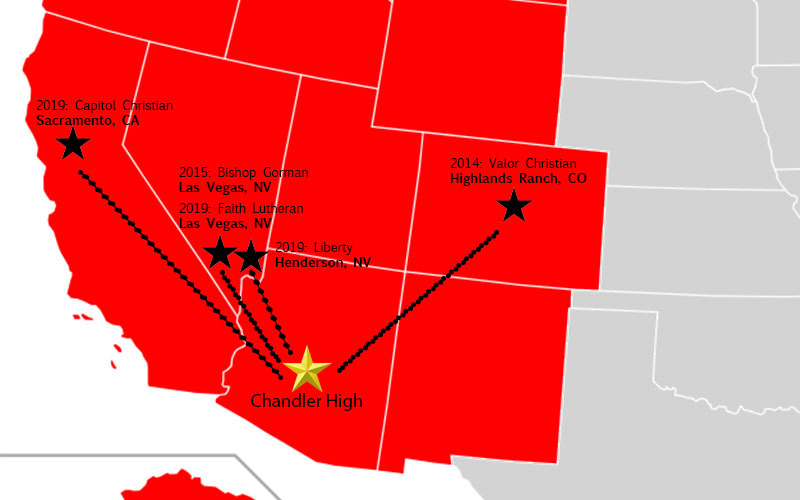 The Chandler High School football team sometimes travels out of state to play quality opponents. Here are five it has played since 2014. (Graphic by Kaitlyn Green/Cronkite News)

Like Chandler, Cherry Creek looks outside of its state every year. The Bruins were scheduled to travel to Pennsylvania to face North Allegheny last season, but the game was canceled due to the pandemic.

It left them an open game on their schedule this season, so they went searching nearby and found Chandler.

“We went on the national board and looked at neighboring states that were relatively close and saw Chandler had an open date,” said Dave Logan, Cherry Creek coach and a former NFL wide receiver with the Browns and Broncos who also has served as the radio voice of the Broncos for 22 seasons.

“I’m well aware of Chandler and their success and program they are,” said Logan, who has coached four different Denver-area high schools to state championships and was named American Football Monthly’s National High School Coach of the Year in 2001.

“They have great players, great team speed and know how to win. So we recognize this was a great, great opportunity. I am a high school football fan, and I know Chandler and followed what they have done. They have a terrific program and know they are a different beast. 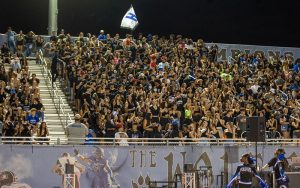 “Their kids expect to win every time they step onto the field and look to accomplish their year-long goals, which aligns with what we are trying to do in Colorado.”

Logan said a four-day-a-week summer program over eight weeks laid the groundwork for the Bruins, who won their first two games of the season without surrendering a point.

“Success breeds success but you have to embrace the process,” Logan said. “ If it were easy, you would just show up in August, two weeks before school starts, and go about it that way. You can’t have a championship caliber program doing that. We know we have a bullseye on our back in the state because of our success.”

The game served as a measuring stick for both teams before they dive into serious competition within their states.