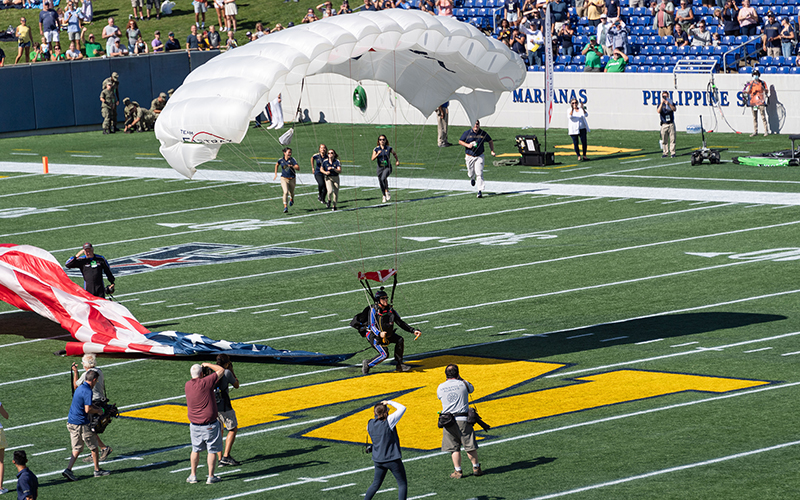 A parachutist trailing an American flag lands at Navy-Marine Corps Memorial Stadium before the Sept. 4 game against Marshall. The Midshipmen host Air Force on Saturday, the 20th anniversary of the Sept. 11 attacks, in a game that has a special significance for players at the academies, even though many were not born when the attacks took place. (Photo by Stacy Godfrey/U.S. Naval Academy) 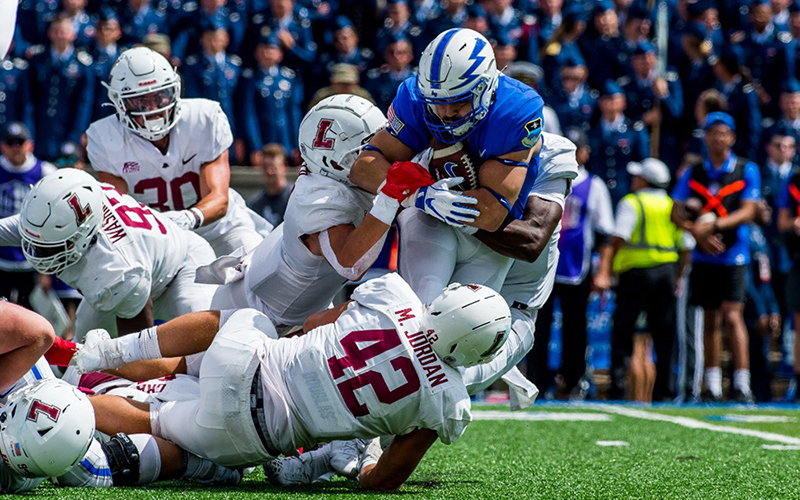 The U.S. Air Force Academy Falcons in their traditional blue uniforms in their Sept. 4 game against Lafayette. Both Air Force and the U.S. Naval Academy Midshipmen will be wearing special uniforms when they square off in Annapolis on Saturday, the 20th anniversary of the 9/11 attacks. (Photo by Trevor Cokley/U.S. Air Force)

WASHINGTON – Saturday’s football game between Air Force and Navy will be the 54th between the two teams – and their first meeting on 9/11, leaving one Arizona-born Navy player with “goosebumps just thinking about it.”

“Gosh, it’s going to be super exciting just to be able to represent the Navy and our country, in a game fought between two service academies, on the day that our country was attacked, 20 years later, just to show how far we’ve come,” said junior linebacker Max Sandlin, a Chandler native.

The 2019 graduate of Chandler High is one of 11 Arizonans competing for either the Falcons or the Midshipmen. Of the 11, just one of them – Air Force senior defensive back Tré Bugg, a 2017 Williams Field alum from Gilbert – was alive on Sept. 11, 2001.

Sandlin said he has learned of that day from the firsthand recollections from John Kelly II, a Brooklyn firefighter who responded to Ground Zero, who is the father of Sandlin’s linebacker teammate John Kelly III.

It’s a day that also means a lot of different things for a lot of people. For Sandlin, “just having that perspective” from the Kellys has made the buildup to the 20th anniversary personal in a way he had never experienced before. 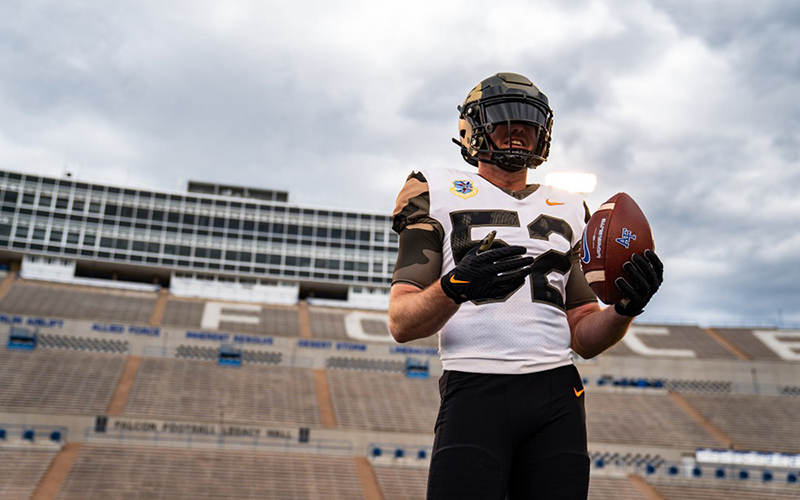 The Air Force Academy Falcons will unveil a new uniform for their game against Navy, with camouflage patches and helmets and logos honoring the B-52s of the Vietnam era. (Photo by Mary Ginsbach/U.S. Air Force Academy)

Regis Velez, a freshman Navy receiver from Phoenix, said playing on the anniversary comes with “definite” meaning on its own. But it also gives Velez a chance to face childhood friends Mason Bugg of Gilbert, Williams Field class of ’20, and Matt Malloy of Scottsdale, Notre Dame Prep class of ’20, who both are suiting up for their sophomore seasons with the Falcons.

To Velez, these aren’t competing notions.

“It kind of ties in with the aspect of we’re playing for something bigger than ourselves and we’re remembering a tragic moment,” he said. “But at the same time, it’s kind of humbling and calming to know that I have brothers on the other side of the field that, although we’re competing against each other right now, at the end of the day, we’re going to be fighting together in battle.”

The teams will commemorate 9/11 with special uniforms. Air Force’s helmets and sleeves will have a Vietnam-era camouflage pattern and their pants legs will feature icons of B-52 bombers. Special patches worn on the chest and back nameplate show the insignia of the 75th Bombing unit, which was part of a Vietnam War mission dubbed Linebacker II.

Navy’s uniform will pay homage to the Marine Corps’ dress blues, with a black jersey bearing gold numerals, and blue pants with the “blood red” Marine strip down the side.

CORRECTION: An earlier version of this story gave the wrong team for Tré Bugg in the third graf. He plays for Air Force. The story here has been corrected, but clients who used a previous version are asked to run the correction found here.

Prior to kickoff, there will be a moment of silence for the lives lost on 9/11 and in the ensuing war on terror. The Naval Academy Glee Club will sing the National Anthem before a flyover by fighter jets from both branches.

At halftime, the 16 Navy and Air Force alumni who were killed on 9/11 will be honored, followed by a joint performance from the Navy’s and Air Force’s drum and bugle corps.

Amid the pageantry that comes with flashy new uniforms or ceremonies, Air Force senior linebacker Caleb Humphrey tries to continually remind himself of the tasks at hand.

“I think there’ll be a different feel,” said Humphrey, a Casa Grande native who graduated from Desert Vista in 2018. “But I think as a player, you kind of have to treat it as another day at the office. Going into the game, you can’t make it too big of a moment. It’ll kind of mess with the mental part of it.”

That was echoed by Navy offensive lineman Joshua Pena, a freshman who said that while there has not been much conversation about 9/11 as a team, there is a more internal understanding of the moment.

“Being at a military academy, it’s taken very seriously,” said Pena, a Queen Creek resident who graduated from Chandler High in 2019. “Which it should be.”