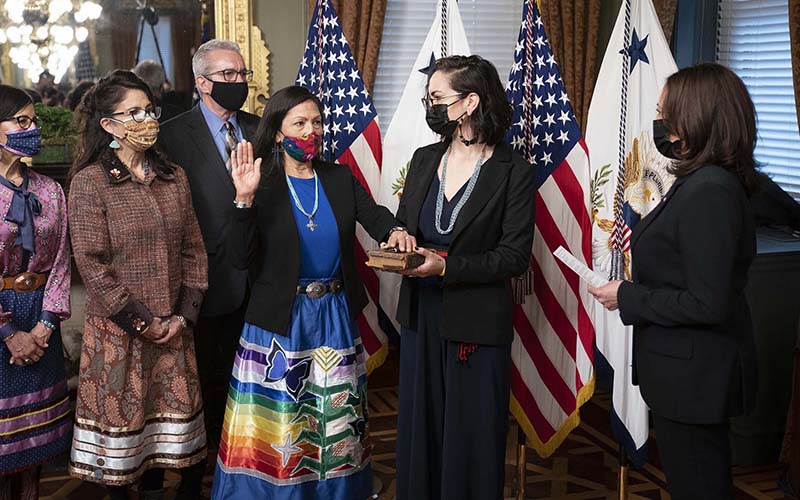 Interior Secretary Deb Haaland is given the oath of office in March by Vice President Kamala Harris, becoming the first Native American to head a Cabinet agency. She is the most high-profile of a number of Indigenous nominations by the Biden administration, including Janie Simms Hipp’s appointment as counsel to the Agriculture Department. (Photo by Lawrence Jackson/The White House)

WASHINGTON – For the first time in history, an Indigenous woman is overseeing U.S. agriculture law – but Janie Simms Hipp is just the latest in a number of Native Americans nominated to top posts in the Biden administration.

Hipp, a citizen of the Chickasaw Nation, was confirmed July 30 by the Senate as general counsel for the Agriculture Department. She joins a list of successful Indigenous appointees led by Interior Secretary Deb Haaland, a member of the Pueblo of Laguna who became the first Native American to lead a Cabinet agency when she was confirmed in March.

Pending nominations include Charles F. Sams III, a member of the Confederated Tribes of the Umatilla Indian Reservation, who was nominated in August to oversee the National Park Service, and Robert Anderson, a member of the Bois Forte Band of the Minnesota Chippewa Tribe, nominated in April to be solicitor of the Interior Department.

Jaime A. Pinkham, a member of Idaho’s Nez Perce Tribe, was appointed principal deputy assistant secretary of the Army for civil works, yet another first-time non-traditional appointment to a federal position.

“I know Janie (Hipp), glad to have her here in D.C.,” Pinkham said. “And Chuck Sams and I have spent countless miles traveling the Northwest together, so I was really tickled to see him being nominated.”

Hipp’s confirmation means that someone with the traditional knowledge of her tribe and an expansive resume in agriculture will have influence over the ways the government obtains and produces food, deals with climate change and preserves natural resources. 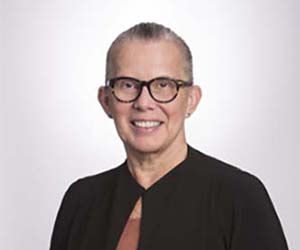 Janie Simms Hipp, a citizen of the Chickasaw Nation, was one of several Ingidenous nominees when she was confirmed this summer as general counsel to the U.S. Department of Agriculture. (Photo courtesy Janie Simms Hipp)

Hipp has more than three decades of legal experience, mostly in agriculture law. At her confirmation hearing in May, Sen. Debbie Stabenow, D-Mich., introduced Hipp as the first nominee in 20 years with such an expansive background in agricultural law.

“Ms. Hipp has dedicated her career to promoting the important role of women and First Americans in advancing food security, sustainable agriculture, and equitable agriculture policy,” Chickasaw Nation Gov. Bill Anoatubby said in a statement. “Her keen understanding of the agricultural community, experience, legal skills and commitment to fairness make her uniquely suited for this important role.”

In her confirmation hearing, Hipp said she can her job through the eyes of a farmer because that is where she comes from. She grew up in Idabel, Oklahoma, an agriculture and forest-dependent town of around 5,000 people at the time.

Hipp’s father owned a tractor dealership before it went under during the farm credit crisis of the 1980s. Hipp said in her confirmation hearing that through her father’s business, she and her sister learned the ropes of agriculture business from an early age.

“I did the payroll every Saturday and my sister and I helped with the books every month,” she testified. “I grew up listening to farmers’ stories as they came by for coffee.”

Mike Weeks, former president of the Oklahoma Cattlemen’s Association, said Hipp’s appointment is an opportunity for tribal nations – whose members accounted for 13% of Oklahoma producers in 2017 – and for the state, where agriculture and energy are the top-two economic drivers.

“It’s really good for the area and the economy and just Oklahoma in general that these tribal nations are really stepping up and taking a very active role in agriculture,” Weeks said. “I think that just continues to help them and our state as well.”

But Hipp’s parents were also educators, and she said at her confirmation hearing that higher education “was never an option in our house, it was expected.”

“I just kept doing my work and kept marching forward,” she said.

At the USDA, she joins a department that is home to 29 agencies with responsibilities for natural resource conservation and preservation, forestry, support for farmers and ranchers, rural development and more.

“It is a huge honor to be the general counsel because it brings together all of my over three decades of work, but it also brings together who I am,” Hipp said, citing her own background in tribal ecological knowledge.

She said that knowledge is usually passed down through storytelling in various Indigenous cultures, with each tribe having its own wealth of ecological knowledge.

Hipp said the USDA’s Natural Resource Conservation Service has for years recognized the ecological knowledge of tribes, pointing to its use in the Forest Service and prioritizing Indigenous voices in Wisconsin resource conservation as examples.

With its influence and oversight across agriculture, food security and resource conservation, Hipp said she is excited for the changes she can instill into the agriculture realm and Indian Country at large.

“I will always keep our nation’s farmers and ranchers – no matter who they are – as my guiding light and North Star,” Hipp said in the hearing.

– Gaylord News is a Washington, D.C.-based reporting project of the University of Oklahoma Gaylord College of Journalism and Mass Communication. Cronkite News has partnered with OU to expand coverage of Indigenous communities.