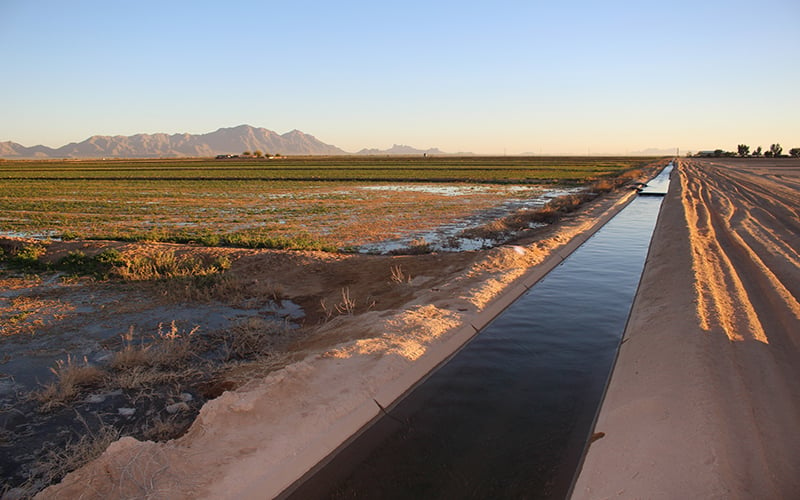 Water from the Colorado River flows through an irrigation canal at an alfalfa farm near Eloy. (Photo by Luke Runyon/KUNC)

The federal government declared a water shortage for much of the Southwest last week, resulting in the first mandatory cutbacks for some who draw from the Colorado River. As two decades of drought, increased demand and climate change cut deep into the West’s water supply, the region is looking ahead to a future where supplies might drop further still.

The first to see cuts will be farmers in central Arizona.

“Nobody is feeling like this is just a blip on the radar, and we’re going to have to ride this out for two or three years and then things will get back to normal,” said Chelsea McGuire, director of government relations at the Arizona Farm Bureau.

She grew up in a family of farmers in Pinal County, where growers will bear the brunt of this first wave of water cutbacks.

“I think everyone is embracing – as much as we’re sick of this term right now – a new normal,” McGuire said. “And figuring out, ‘OK, how do I make my business operate? How do I keep my family business intact with the reality that we’re facing right now?’”

Arizona is set to lose 8% of its total water supply when restrictions go into effect in January. Those cuts were triggered by a grim forecast for Lake Mead, a reservoir that feeds millions across the Southwest. The Bureau of Reclamation predicted the lake’s water level will continue to dip over the next two years, past already historic lows.

Because of that, McGuire said Pinal County and those Arizona farmers could be a “canary in the coal mine” for others in the region.

“It is not a crisis,” said Ted Cooke, general manager of the Central Arizona Project. “But it will become a crisis if we don’t pay attention and develop additional responses to the situation.”

Cooke is in charge of a manmade river that pipes water from the Colorado River across more than 300 miles of desert, eventually supplying farmers and cities – including Phoenix and Tucson. He said those forecasts are useful.

“It doesn’t make the news any less bad, but at least I can plan for it and take the next step I can take,” Cooke said. 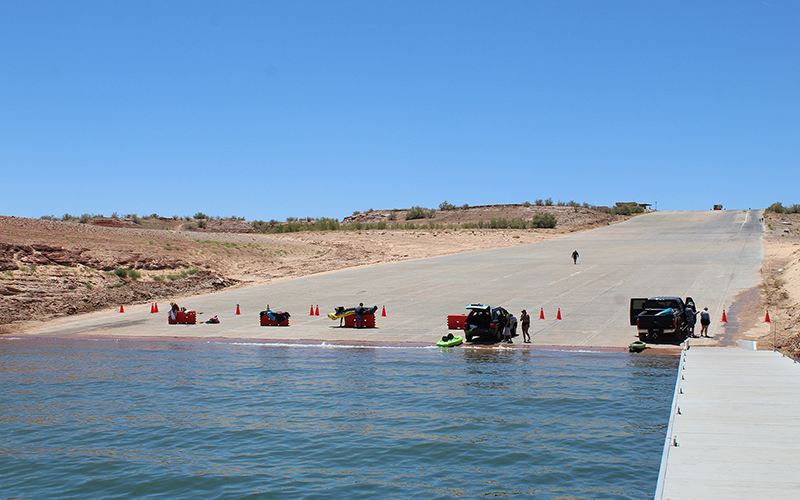 January’s cutbacks are slated to impact farmers, but Cooke said restrictions to municipal water supplies – affecting homes and businesses – could begin as soon as five years from now. But because of storage and conservation work, residents probably won’t see the effects for even longer.

“We are not even close to the end of our rope of saying, we don’t have any more ideas, we are out of water and we can’t think of anything else to do,” Cooke said. “We are two decades away from that. The only way in two decades that we will reach that point is if we don’t do any more starting today for that next 20 years.”

Any new techniques or re-energized conservation tactics would compound existing water-saving measures across the region. In Tucson, for example, the city banks roughly one third of its Colorado River allocation each year, saving a portion for drier days in the future.

It does so by pumping water into storage basins outside the city limits. Some water seeps into the cracked desert earth and is later retrieved as groundwater from a subterranean aquifer.

On top of that, the city recycles and treats wastewater for park lawns and golf courses. John Kmiec, Tucson’s water manager, said they’ve already had to implement re-use and conservation efforts to accommodate a growing population. As a result, the city has managed to keep its total water use pretty much flat for about 30 years, even as it gained 200,000 residents.

The coming years will likely test the long-term sustainability of those conservation measures, if water levels drop as forecast.

Complicating the situation even further, climate change has made it harder to predict how much water will be available for the region to use.

“Climate change is water change,” said Jennifer Pitt, director of the Audubon Society’s Colorado River program. “We can no longer rely on the fact that we know what the hydrology is going to be in the Colorado River basin and that has water managers worried.”

Historically, she said, the dry times were balanced out by wet years. But thanks to warmer temperatures and erratic climate patterns, that predictable cycle is no longer the reality.

“Water managers like to say ‘Hope for the best, but make sure you’re prepared for the worst,’” Pitt said. “And we can’t even tell you with certainty what the worst could be.”