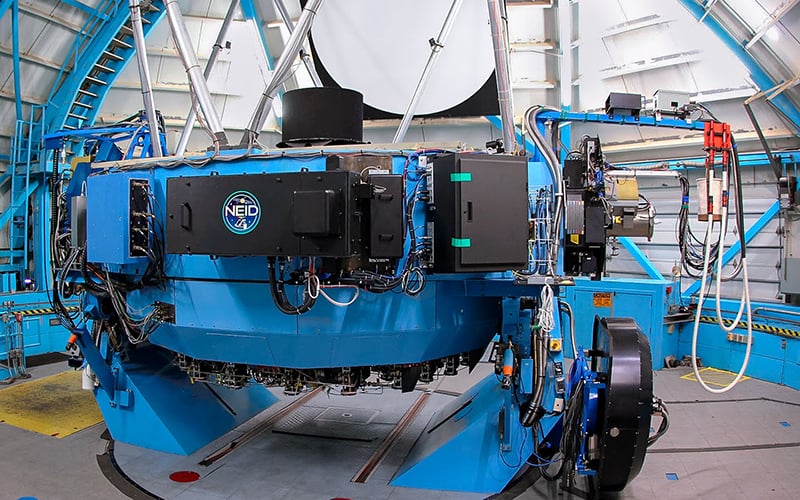 The NEID spectrometer looks for Earth-like planets outside our solar system by measuring slight changes in the light coming from distant stars. (Photo courtesy of the National Science Foundation)

One of the most precise instruments for detecting planets is being used at the Kitt Peak National Observatory on the Tohono O’odham Nation west of Tucson.

The NEID spectrometer looks for Earth-like planets outside our solar system by measuring slight changes in the light coming from distant stars. Those shifts are caused by the gravitational tug of nearby objects, such as planets, and the movement can be measured to determine how massive the object is.

NEID, which rhymes with “fluid,” is derived from the Tohono O’odham phrase “to see.” The instrument was built by Penn State University in partnership with NASA and the National Science Foundation and installed on Kitt Peak, where it became operational this summer. A University of Arizona team provides the spectrometer’s software hub.

Chad Bender, an instrument scientist for NEID and an associate astronomer at the University of Arizona’s Steward Observatory, said the technique has been used successfully since the 1990s, but NEID is superior to anything that’s come before.

“We’re pushing the boundary of sensitivity,” Bender said. “We’re much more sensitive than the previous generation of instruments that have used this technique to search for planets.”

That precision helps find planets that are closer to the mass of Earth.

“The smaller the planet, the less influence it has on its star. So if you want to look for smaller planets, you need to improve the precision with which you can measure the star because the star is moving at a slower speed,” he said.

It’s a slow process: The instrument team at Kitt Peak is currently monitoring a small sample of about 30 to 40 stars, with a goal of finding planets around them in three to five years, Bender said.

But other NASA missions can speed up the process, he said, such as the Kepler and TESS – the Transiting Exoplanet Survey Satellite – missions that conduct imaging surveys using the “transit technique.” It can determine planet size by measuring the decrease in starlight when a planet passes in front of a star, allowing researchers to look at thousands of stars at the same time. 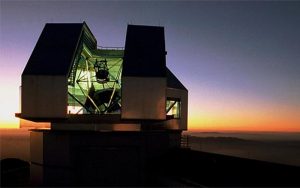 The NEID spectrometer, one of the most precise instruments for detecting planets, sits atop the WIYN Observatory, a 3.5-meter telescope at the Kitt Peak National Observatory in southern Arizona. (Photo courtesy of NOAO)

“One of the things that NEID is doing is, in addition to this search for ‘earths,’ it’s also going after these objects that the TESS mission identified as interesting possible planets and try to measure their mass,” he said.

“Once you have a mass and you have a radius, then you can solve for a density and now you can start to determine what a planet is made up of.”

He said astronomers have found thousands of planets outside our solar system, and those planets suggest there are different ways for planetary systems to exist.

Bender said scientists use what they know about our planet to help them understand new planets more easily.

“When we look for life, a lot of the times we’re looking for something that resembles life on Earth. So we’re looking for planets that are the temperature of Earth, have the atmospheric composition of Earth, and are about the size of Earth,” he said. “It isn’t to say that we can’t have other exotic forms of life, but it’s hard to look for because a lot of science is not Star Trek.”