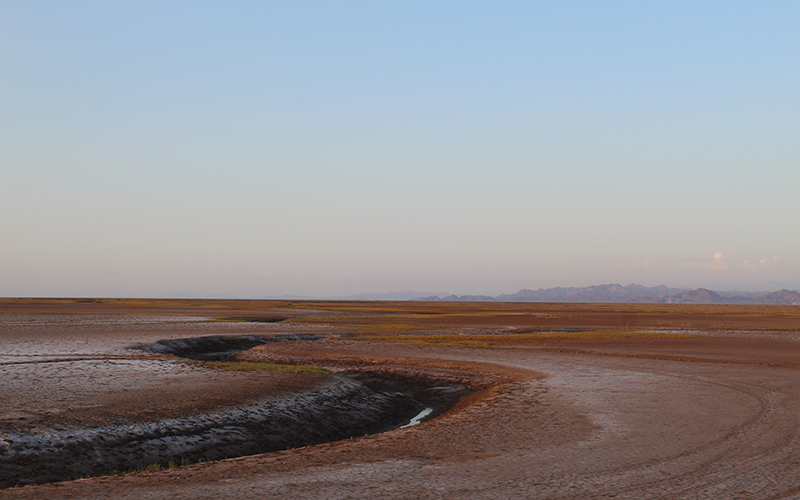 The Colorado River’s estuary has been deprived of freshwater flows due to overuse in the U.S. and Mexico. Rather than emptying into the sea, its water grows crops in Arizona and keeps lawns green in LA.(Photo by Luke Runyon/KUNC)

Seven years ago, a pulse of water on the Colorado River at the U.S.-Mexico border temporarily reconnected it to the Sea of Cortez, which meets the Pacific further south. Scientists used the so-called “pulse flow” to study what plant and animal life returned to the desiccated delta along with water.

Armed with that knowledge, scientists and conservation groups are trying a new and more targeted strategy to bring water back to the final 100 miles of the Colorado River this year.

It’s an attempt to reconnect portions of the river left dry from decades of overuse, and it’s happening in one of the driest years the basin has ever seen.

Just after sunrise in the Colorado River’s dry estuary in Mexico, during a mid-June heatwave, Tomás Rivas hunched over a line of tiny bits of wood and debris, left in a neat row from the receding tide. He combs his fingers through it, hoping to find jumping spiders, one of the resident species of the river’s estuary.

Rivas is an ecologist with the Sonoran Institute, a conservation group. A century ago, the spot where he hunted for spiders would’ve been covered by water. By definition, an estuary is a place where brackish ocean water meets and mixes with a freshwater river. It takes the two – ocean and river – to make the whole.

There’s no good substitute word for what the Colorado River delta is now. Tides in the Sea of Cortez still reach up into the Sonoran Desert. But there’s no river water. Dams along the Colorado River’s length in the U.S. and Mexico draw its water away to serve farms and cities throughout the region. Rather than emptying into the ocean, its water grows citrus in Arizona and greens up lawns in Los Angeles. 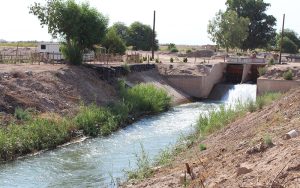 Water spills from an irrigation canal into the Colorado River’s channel in Mexico. (Photo by Luke Runyon/KUNC)

“These are harsh conditions here,” Rivas said. That day, it reached 120 degrees.

One almost forgotten feature of the Colorado River delta is its tidal bore – a wave that formed as the incoming tide rushed against the freshwater river.

“The people locally call it, ‘El Burro,’ for the tidal bore,” Rivas said. It even had a sound, he said, of crashing, rumbling water. “People say, ‘Hay viene el burro,’ which is like, ‘The donkey’s coming.’”

Because the Colorado River is so overused, El Burro hasn’t charged in its delta in decades.

Rivas’ group, along with other Mexican and American environmental groups, are working to bring water back into this part of the estuary and study what happens. Some of the restoration work is funded by the Walton Family Foundation, which also supports KUNC’s Colorado River coverage.

Additional water releases into the delta began May 1 and will extend to October, with peaking flows in early summer. The water volume won’t be enough to fully revive the tidal bore, but Rivas said it can help restore riverine habitat. 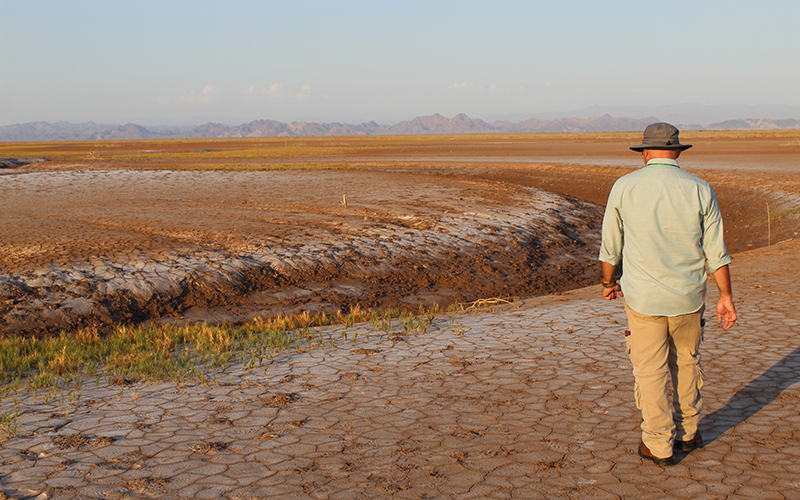 ‘A little bit of repair’

This spring and summer, portions of the Colorado River delta flowed again. But unlike 2014’s pulse flow, where the dam at the U.S.-Mexico border sent a huge volume all at once, this year’s releases of water are targeted to restoration sites.

“This is a little bit of repair,” she said, pointing to an irrigation canal where water gushed back into the river’s channel. The water is diverted near the U.S.-Mexico border.

“We’re using the irrigation canals to bypass the dry reach,” Pitt said. “And drop the water into the river at the point where the scientists tell us it will do the most good.” 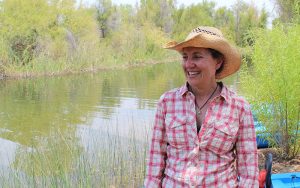 “If we don’t figure out at this moment how to support the river itself and all of nature that it supports, I fear that we lose them permanently,” says Jennifer Pitt with the National Audubon Society. (Photo by Luke Runyon/KUNC)

The Colorado River is grabbing national headlines this summer as water shortages become more urgent. Hot and dry conditions are coming home to roost in its reservoirs, dropping the two biggest — Lakes Mead and Powell — to record lows. Even in a dry year like this one, Pitt said both the U.S. and Mexico have agreed to set aside water for the environment.

“If we don’t figure out at this moment how to support the river itself and all of nature that it supports, I fear that we lose them permanently. So I think at this time it is more important than ever,” she said.

That idea of carving out water supplies just for the river itself remains controversial. Some skeptical city leaders and farmers in Mexico have said any water spilling into the ocean is wasted, said Carlos de la Parra, a professor at El Colegio de la Frontera Norte, who’s acted as an adviser to the International Boundary Water Commission.

“There are voices out there that are saying, ‘Stop this, you are wasting water,’” he said. “It really depends on the perspective you have.”

The flows happening this year were part of an update to the 1944 treaty the U.S. and Mexico use to govern their shares of the Colorado River. Over the past 21 years of ongoing hot and dry conditions, de la Parra said the two countries have transitioned from a relationship held at arm’s length to one of mutual respect. That led to a commitment from the U.S. to fund irrigation efficiency projects in Mexico, with some of the conserved water from those upgrades being set aside for environmental flows.

“Look around the world for another border that joins two countries that are so dissimilar and you’re hard pressed to find it,” he said. “We’re friends, we’re partners. And so because we are so dissimilar, maybe we have the opportunity to become a model.” 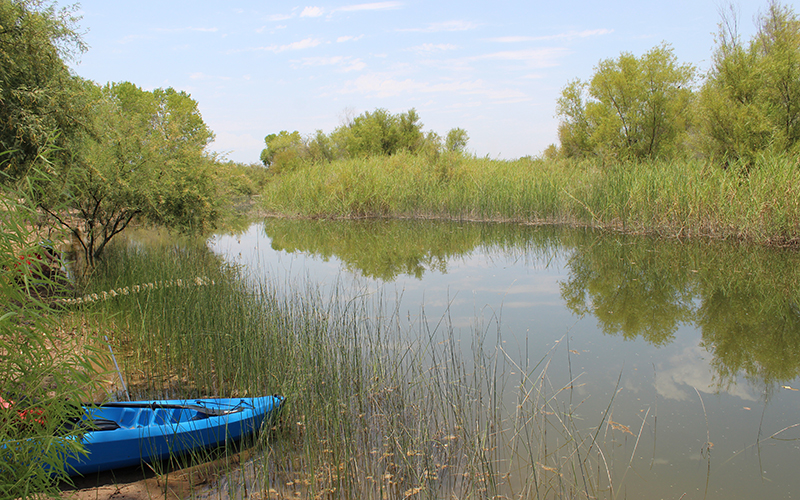 Laguna Grande is one of the more mature restoration sites in the Colorado River’s delta. (Photo by Luke Runyon/KUNC)

At Laguna Grande, one of the more mature restoration sites in the delta, groves of cottonwood and mesquite trees line the river channel. Dragonflies, endangered birds and even a few beavers have taken up residence. During this year’s peak flows, which lasted about 80 days starting May 1, enough water filled the channel to float a kayak. At a spot just downstream of the site, nearby residents jumped in to cool off.

“This is 1% of the water that’s coming from the U.S., and it’s building so much into the ecosystem,” said Rocio Torres, the Sonoran Institute’s lead for Colorado River delta restoration. “For me, and for our team, that means there’s hope.”

Torres said these targeted flows are less flashy and harder to explain than the pulse flow. In 2014, it was easy and accurate to say that the river was fully connected to the ocean for weeks. This year, it takes a bit more understanding of Mexican irrigation infrastructure and delta geography to fully grasp what’s happening.

But Torres said the flows happening this year wouldn’t have occurred without the pulse flow seven years ago. The event galvanized communities in the region, she said. It built a base of support from water officials in both countries who agreed to set aside a small amount of water to benefit the plants and animals deprived for so long.

“I think that’s the way human beings, we learn,” she said. “We messed things up. We realized we shouldn’t have done that,” and bringing it back happens little by little.