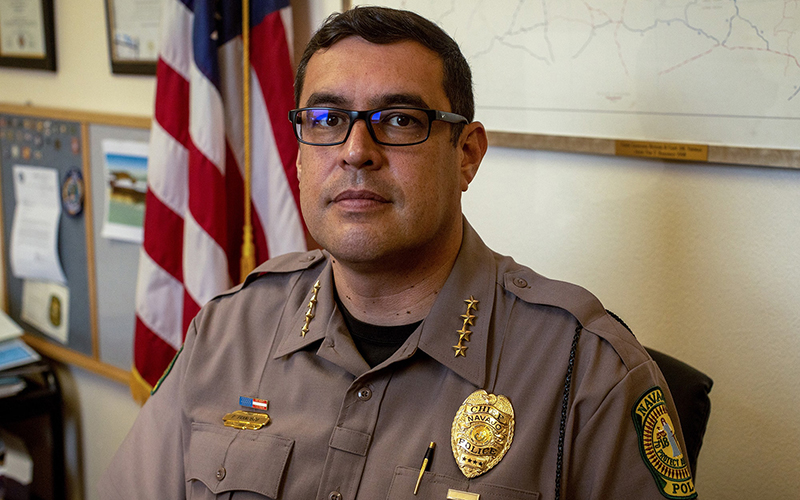 Since taking the position in 2016, Navajo Chief of Police Phillip Francisco has been a vocal advocate for upgrades in the department, which has 200 employees and dilapidated facilities. (Photo by Beth Wallis/News21)

WINDOW ROCK – Navajo Chief of Police Phillip Francisco sits ramrod straight at his desk, surrounded by manila folders brimming with paperwork and a Darth Vader figurine that wields a pen as a lightsaber.

The chief, an Army veteran hired in 2016 after serving in several law enforcement departments in New Mexico, took charge after nearly eight years of rotating acting chiefs. He came from Farmington, New Mexico, to serve and protect the largest Native American tribe in the U.S. Francisco, 45, whose father is Navajo, grew up near the reservation.

A year before Francisco was sworn in, Officer Alex Yazzie was shot and killed while answering a domestic violence call. Francisco – who had been working closely with the Navajo Police Department while serving at nearby agencies – felt called to step in.

“Seeing the struggles that the Navajo Nation Police Department went through, I thought, ‘Maybe they need a leader.”’

The increased demands of the COVID-19 pandemic exacerbated issues in the department, Francisco said: chronic understaffing, dispatch systems that trail technology by 50 years and archaic facilities that include 71-year-old administrative buildings and a converted post office.

The 200-member department polices a rural area larger than West Virginia, he said, with dirt roads and houses so remote they don’t have addresses and can be out of range of police radios. During the pandemic, officers often worked 16- to 24-hour shifts to fill in for sick or quarantined colleagues.

Francisco and his department commissioned a study, released this spring, by the Boston consulting group Strategy Matters that recommends the department needs 500 to 775 personnel to handle services, which range from domestic violence and public intoxication calls to reinforcing the reservation’s COVID-19 curfew and distributing personal protective equipment.

After leading the department through the height of the pandemic, Francisco now hopes the federal government’s most recent COVID-19 relief bill, the 2021 American Rescue Plan Act, will help pay for some of the department’s critical needs. He spoke about the Navajo Nation’s law enforcement history, the lessons that emerged from the pandemic and his hopes for the department’s future. 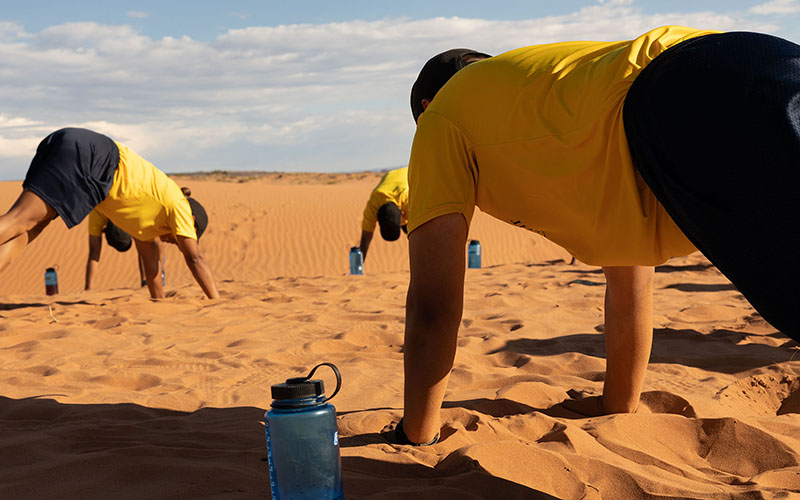 Navajo Nation Police recruits stretch after running on sand dunes for physical training in Chinle, Arizona, on the reservation. A recent report said the 200-member department needs hundreds more officers to do its job. (Photo by Beth Wallis/News21)

What brought you to the Navajo Police Department in 2016?

I’ve always had a connection with my people on the reservation, working very closely with the agency in San Juan County and Farmington, near the border of the reservation. And this looked like it was something I needed to do. Then right before that, there was the death of Alex Yazzie in the line of duty. It was time to step up and offer my experience and try to make a better change for the Navajo Police Department.

How did COVID-19 change the department’s day-to-day functions?

We had to keep going every day. Other (government) departments, they got to close down and go home. But we were forced to keep working. That was our mandate. And that’s what we do. We have to provide public safety services. So we had to figure out ways to keep going forward.

CORRECTION: An earlier version of this story included a photo that incorrectly said a bank of phones was located in a former police station. That photo has been deleted and replaced by a photo of police recruits. Clients who used the earlier photo are asked delete it and replace it with the recruits photo found here.

Getting equipment and things was very difficult during that time. We had to have creative ways of procuring PPE and those kinds of things. Besides that, the officers are tired. They were doing more things, such as curfew violations. We had creative ways to communicate with the public, which we kind of turned into public service announcement checkpoints. We were basically saying, “Hey, we have curfews. You need to wear your PPE,” educating and giving out PPE.

(COVID-19) made it more difficult for our police officers, because it’s very difficult to arrest somebody in that environment and have them safely incarcerated. So there were some more roadblocks for officers – we had to get clearances for people from COVID. There’s a real strict protocol to even arrest people. It hampered our abilities to actually arrest people because we had to make those decisions. Like, is it important to arrest this person or can we just send them home? Those kinds of things. And how do we bring people in that may be COVID positive and infect the entire population in the jail? So there are those considerations which make it very difficult to manage and enforce laws.

Because of COVID, now every arrestee has to go through a hospital. Before (the COVID-19 pandemic), if there are no signs of any kind of issue with somebody, we would just take them to jail. The jail would accept them. Now, pretty much every single arrestee we have to take to the hospital to get cleared, so that’s another hour or two hours.

Your department already was stretched thin, and Navajos were hard-struck by the pandemic. How did you manage to fill in for colleagues who were sick with COVID-19?

It caused significant issues with our department because, even dealing with people that were exposed, we had to get them off the street for weeks at a time until they were cleared by a doctor. Anybody else that was connected to them, we had to quarantine them. Sometimes we had seven to 14 (officers) off the street just because they were exposed.

Then we had to consider one of the biggest problems we had with our officers: the concerns for their own families. So they’re working every day. They’re exposed, and then a lot of them decide to quarantine away from their family during this whole time, like months and months and months. They’re living separately, or they’d be quarantined in one part of the house so they wouldn’t expose their family.

I think about the mental toll it took on them. I’ve heard some of the officers talk about it. It was difficult not knowing if you’re going to spread it to your family. And having that distance from your family, sometimes not having contact. I heard from some officers that their families were sliding food under the door for them. So that was a huge toll on officers.

The calls were coming in every day. And then we had to do checkpoints and all these other COVID-related things. At some point, we didn’t have enough people. So through the whole year, our demands were so high, we couldn’t afford to let people go on vacation. I had to cancel all that. With a minimal amount of staffing, the demands from the public, the demands from the health crisis and the pandemic, it just was impossible.

Were you expecting some CARES Act funds to be spent on the department, and were they?

I was. We put in a budget of $36 million, hoping we can get equipment and different things to help us do our job and respond to things better. At first, that was very difficult because we didn’t have CARES funds, and we were paying out of our own department. Then, when that kicked in, we were able to pay out of the CARES fund.

I requested a decontamination trailer, decontamination services, more PPE, extra uniforms because the officers are still going through uniforms, response vehicles. A helicopter even, because we were responding to all kinds of areas, and we had to get PPE to those areas and get the officers to areas quicker. (The Navajo reservation is) so large that I think that a helicopter would have been essential to drop off supplies, pick up supplies and drop off officers, respond to medical situations, and transport people out. We also have a lot of missing people that are injured. But in the end, all we got was some of our hazard pay paid for and a small amount of money for PPE.

Are you looking for funds from the American Rescue Plan Act?

I really hope that with the American Rescue Act funds, we can address these buildings. This building (the Navajo Division of Public Safety headquarters) is pretty old and should be condemned. So we’re actually trying to get out of it. It needs to be rebuilt. The district here and the Shiprock district, there’s a plan to build some substations, not just police substations, but a combined Department of Public Safety substation for fire, EMS and police department and all the other Department of Public Safety components in the area, so we can help respond to areas quicker.

But the biggest thing I’m hoping is to fund our dispatch centers, to build two consolidated dispatch centers instead of having seven, so we can pool our resources of dispatchers, be more effective and actually implement the (Enhanced 911) system. We also have some plans to upgrade our radios to new digital radios. More cellphone equipment and connectivity in our vehicles out in the field to go with our dispatch center.

I want to push to really fund our dispatch centers and our buildings and our infrastructure for the Police Department so we can have a good place to work and modern technology to do our job better. Because with the amount of staff we have, it’s going to take a long time to build up staff, even if there’s a huge influx of money. Hiring officers is a long, tedious process, and getting them quality trained and on the street is going to take years and years and years. So how do we work more effectively with the staff we do have? We have to leverage technology and do our job smarter with that technology.

What changes would Navajos see with a well-funded police department?

I think if we were funded, we’d be able to respond accordingly because we had officers to be able to go to these calls in a timely manner. If we had the communications equipment and the dispatch center is up and running, we could actually have a better accounting of those that would really significantly reduce the response time or the customer service to the community. I think they would see a huge change.

It’s been a very challenging year, with everything here. I think it’s really a renaissance for the police department to really show our leadership and our community that, hey, we’re here, and this is the reality of what’s going on – that we are doing so much with so little, but yet we’re motivated, and we’re willing to do it because it’s our duty.

*This story has been slightly edited for clarity.

This story was produced in collaboration with the Walter Cronkite School-based Carnegie-Knight News21 “Unmasking America,” a national reporting project on the lingering toll of COVID-19 scheduled for publication in August.Check out the project’s blog here.