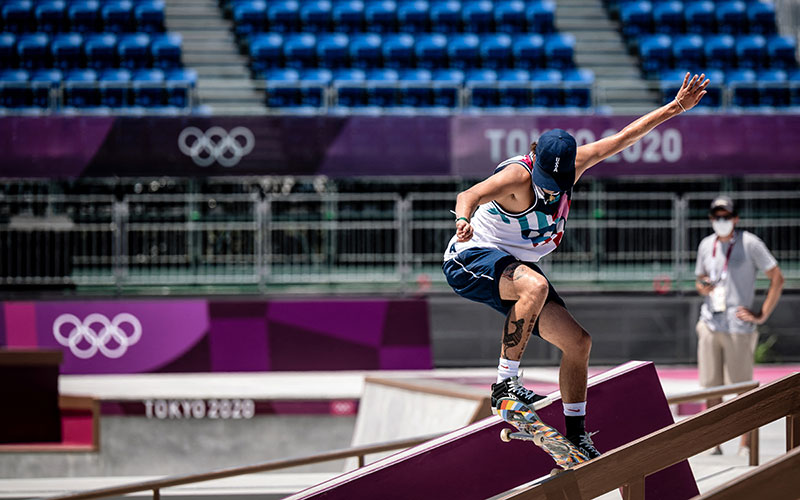 Jagger Eaton was once the youngest person to ever compete at the X-Games. Now, he’s making history again as an inaugural member of the U.S. Olympic Skateboarding Team. (Photo by Jeff Pachoud/AFP via Getty Images) 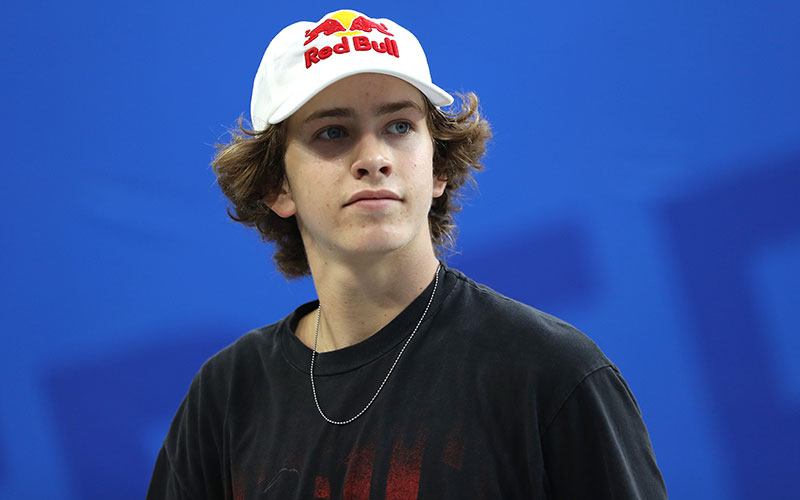 Eaton knows skateboarders from around the globe from his many years at competitions. He’s looking forward to seeing many at this year’s games. (Photo by Sean M. Haffey/Getty Images)

For Eaton, going to the Olympics is in his blood. His grandfather, Stormy Eaton, started Desert Devils Gymnastics in Mesa with the goal of coaching young women at the Olympic level. His father, Geoff Eaton, followed suit. Neither reached that goal.

Arizona is sending its first Olympic gymnasts, Jade Carey and MyKayla Skinner, to Tokyo this year. Neither train at Desert Devils.

However, Eaton, 20, fulfilled the family goal another way when he qualified for the Olympic Street Team in June.

“That was always the main goal for gymnasts … making it to the Olympics and, for me, it was never not on the table,” Eaton said. “The fact that I get the opportunity to do that for the family legacy is pretty special.”

Starting on Christmas Day when Eaton was 4, his family supported his skateboarding pursuits. That day, Geoff gave Jagger and his brother Jett their first skateboards and installed a mini-ramp in their garage.

At the time, Jagger’s parents were coaching gymnastics full-time at Desert Devils. Geoff decided to build ramps there so his sons could be somewhere safe while their parents worked. From there, Kids that Rip, an indoor skate park was born.

Now, Kids that Rip is a significant part of the Arizona skateboarding scene with fellow Olympians Smith and Brighton Zeuner skating there from a young age.

“What Jagger’s dad created at (Kids that Rip) was a space to specifically train … on a level where nobody has ever seen in skateboarding because he took what he knew in gymnastics, the coaching aspect of gymnastics and how gymnastics was trained, and he applied that to skateboarding,” said Eaton’s coach, Neil Mims. “Jagger was raised in that environment and I think it’s benefited him.”

In addition to his dad’s training capabilities, Eaton said his dad’s understanding of high-pressure competition has been the best thing for him, describing his father’s commitment as “everything for me.”

Along with his dad, his brother becoming a skateboarder at the same time helped him get through challenges. If one of them was down, the pair grabbed their boards and skated their worries away. His success feels like a team win for the family, Easton said

Easton is disappointed his family can’t join him in Tokyo because of COVID-19 protocol. Geoff joked about trying to fit in one of Jagger’s suitcases to make it happen.

Mims said many members of Eaton’s skate family will be there even though his biological family can’t be. Along with Smith and Zuener, Eaton has known teammates Jake Ilardi and Heimana Reynolds since elementary school, meeting them both at competitions.

“To be able to compete with my friends is something even more special,” Eaton said. ”We all want each other to have the best day because we all want to beat each other on the best day and that’s what makes having friends at this level really special.”

Adding skateboarding to Olympic competition has given him a chance to compete with friends for a team medal for the first time in his life. Usually, skateboarding is an individual event but at the Olympics, the skateboarders will have a shot at winning gold for the United States as well as placing first in their individual categories.

Jacob Jenkins, the founder of nonprofit skateboarding company Now Evolving Skateboarding Worldwide, said the team aspect provides a fresh twist for the sport that makes the competition stand out among other major skateboarding competitions. He also loves the global nature of it because his company is devoted to donating skateboards to people in need around the world, from the Uganda Skating Society to kids in the Arizona foster care system.

Jenkins believes skateboarding is more than just mind-blowing tricks and a chance for physical activity: The activity can teach life lessons like perseverance, discipline and overcoming fear.

Skateboarding taught Eaton some of those same lessons, along with keeping him out of trouble because he was always focused on his craft.

“Skateboarding is everything to me,” he said. “It’s perspective, it’s freedom, it’s passion, it’s a career, it’s my life.” 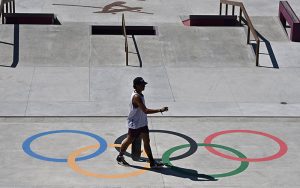 For Eaton, the chance to contribute to a team victory instead of just individual medals is what makes the Olympics stand out among all other skateboarding competitions. (Photo by Jeff Pachoud/AFP via Getty Images).

Olympic skateboarding is divided into two events. Eaton’s dream was to be on both the Olympic Park and the Olympic Street teams. Mims said Eaton is one of the only people alive with enough talent to do both.

Before he qualified for the street team in June, he fell short of making the park team. He described not qualifying for the park team as, “incredibly heartbreaking.” He was so discouraged Mims recalls wondering if Eaton still wanted to try to make the street team.

Just a few days before the competition, Eaton texted Mims that it was a go.

“Even though I know he’s not a quitter, there was a part of me like, ‘Man is he just going to give up,’ because he’s so devastated,” Mims said. “When I got that text it made me happy because I was, like all right he’s going for it.”

Eaton competed well enough to make the Olympic team and the duo has worked hard to prepare him since. Eaton hopes the increased attention skateboarding might get from being part of the Olympics will draw more people to the sport.

Calvin Wolfswinkel, 21, who is part of the Arizona skateboarding scene, agreed with Eaton. Woldswinkel said he could see skateboarding getting another huge explosion like it did in the 1970s and early ‘90s because of its new Olympic status which would bring benefits to everyone involved.

“I think it’s gonna have more kids like actually wanting to be out there on their skateboards and trying all that rather than playing on their phones all day,” Wolfswinkel said.

Wolfswinkel also thinks skateboarding in the Olympics will mean more people recognize it as a legitimate sport rather than people viewing skateboarders as troublemakers.

Mims said Eaton is the perfect example of a skateboarder who isn’t a troublemaker. In a move that many associate with people older than him, the way Eaton prefers to relax and clear his head is by golfing. He goes nearly every day.

Jenkins doesn’t know Eaton personally but said he has skated with him a few times at skate parks around Arizona. It changes the energy there.

“It’s a completely different vibe,” Jenkins said. “It’s really cool to show up at the park and watch him skate.”

Mims said Eaton’s energy when he’s skating is completely different than when he isn’t. Off the board, Eaton is a “sweetheart” who looks out for his two younger siblings. On the board, he becomes laser focused. Mims said the ability to be level-headed and kind as a person but intense as an athlete is what makes him one of the best in the world.

Mims and Eaton both teased NBDs (skateboarding slang for “never-been-dones”) that Eaton will debut in Tokyo. The street competition involves two 45-second runs featuring five tricks. Skateboarders will receive scores on a 10-point scale: One score for the run as a whole and one for each trick. The highest and lowest scores will be thrown out with the final score being the average of the remaining scores.

With Eaton’s new tricks, Mims is confident he will blow the judges’ minds. Eaton feels that way about all his Team USA teammates, describing them as “beasts.”

“We all are built for this level of competition, and that’s going to be what’s really exciting … the fact that USA has a really good chance of winning team gold,” he said.

The men’s street competition will take place on Saturday.