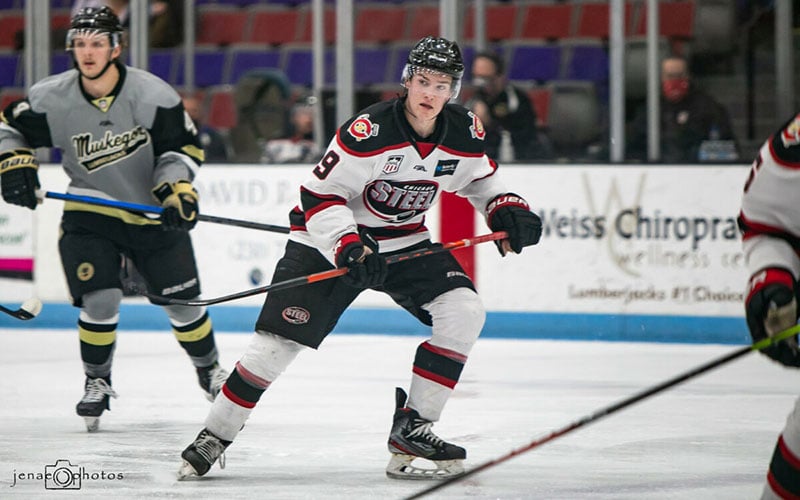 Josh Doan may have grown at a slower rate than his peers, but his fondness for hockey and the joy of competing didn’t deter him. He’s embracing the opportunity to compete in the World Junior Summer Showcase. (Photo by Jenae Photos)

TEMPE – Since he was 2, Josh Doan’s Christmas tradition involved watching the World Junior Ice Hockey Championship, an annual event held in late December. This year could look a little different for him.

Doan, 19, was recently going about his day, preparing to leave his house when he received a random call, which he thought might be a scammer.

“Fortunately for me, it was someone important from USA Hockey,” he said

Doan was invited to the 2021 World Junior Summer Showcase, giving him a chance to represent his country during the 2022 International Ice Hockey Federation World Junior Championship, which would start this December.

“Growing up, I was a smaller guy, and I wasn’t really ever considered in those scenarios, so to get the call from USA Hockey, it was definitely a super cool experience.”

Getting to this point was not always smooth. It took resilience and patience during Josh’s younger days.

“At about 11, he stopped growing, and a bunch of the boys, physically matured past him, and it was hard for him to compete,” Shane said. “For him to battle through this and get to a point where he can be in this mix is huge.”

When Josh struggled, Shane would tell him that eventually everyone would be close to the same size, and that his time would come.

“It’s not a sprint, it’s a marathon, and as long as you keep improving you always have a chance,” Shane would tell him.

“His biggest strength is that he loves to compete,” Shane said. “He just loves to win.”

“So his brain developed, and his body caught up with his brain and that is why he’s so good now,” Powers said. “He’s only going to continue to get stronger and stronger.”

Josh not only consumes hockey, but he watches other sports that he translates to his hockey game. He dissects the various ways athletes from other sports beat their opponents, like setting a screen in basketball or dribbling a ball around an opposing player.

The transition to more competitive leagues has also been instrumental in his development.

Josh left his Scottsdale home to play for the Chicago Steels from 2019-21.

“Everyone is faster (in Chicago), so you have to keep up with everyone, not just a couple of guys,” Josh said. “We kind of say hockey IQ, which is just the overall flow of the game and the smarts of players – using deception rather than skills.”

The showcase will feature even higher-caliber players, with the U.S. hockey team playing eight games in 11 days against teams from Finland and Sweden.

“The only reason there’s pressure is because you are good, and you think you have a chance to win,” Shane said. “It’s not a right, (it’s) a privilege.”

The experience won’t be too foreign for Josh, who watched the World Championships when his father played and competed against some of the players invited.

However, compared to playing against individual players, it will be different facing the European team as a unit.

“(Americans) play a harder kind of game and are willing to cut through areas where you are probably going to take a hit, and you’re going to have to be OK with that,” Josh said. “I think now the Europeans are fine with that, but their skill work outside, is out of this world. So you kind of have to come to them, and they make you miss.”

The competition and pressure may be steep, but Josh isn’t losing sight of the importance of having fun on the rink.

“Hockey is a game that shouldn’t feel like a job,” Josh said. “The moment it becomes something you don’t want to do, it becomes a job. There are other players that you’re always trying to catch but at the end of the day, you’re having fun and being creative. And the game of hockey is all about being creative.”

Josh is grateful for his family’s support and said how cool it is to follow in his father’s footsteps, but he’s forging his own path.

Instead of taking a professional route after high school like his father, Josh opted to play hockey for Arizona State.

It’s only been a few months on the ASU campus, and Josh is already enjoying training with his new teammates and meeting his neighbors. 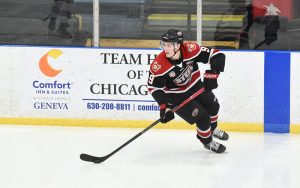 Doan is one of 44 members to be invited for the World Junior Summer Showcase, where he will play eight games in 11 days against European teams. (Photo by Jenae Photos)

“It’s awesome. You can definitely tell the intensity and the professionalism is there compared to club hockey and junior hockey,” Josh said. “It’s a more serious game, guys want to win and that atmosphere is here.”

For now, his foot is on the gas pedal, completing more workouts to build his endurance, cardio and leg strength to survive the many games he’ll be playing at the showcase this summer.

“Growing up, you play four or five at a junior level, but once you get to Chicago you play two games a week,” Josh said. “It’s a competitive sport and a hard long game. So it’s going to be difficult being there for eight days and getting on the ice 11 times.”

The summer showcase is one chance to represent his country. But it won’t be the last.

Most of all, Shane said he’s reminded his son to embrace the chance to represent his country and to be careful not to let anyone take the fun out of it.

“Just to go enjoy it, and embrace the honor even to make this camp,” Powers saud. “The last thing I said to him was, ‘Go make the team. Everyone knows you’re good enough, you can make the team. Whatever happens, happens.

“But we really believe he could be the first Sun Devil to make the World Juniors team.”