Transmission lines from Glen Canyon Dam’s powerhouse run from the base of the dam to the top of the canyon and beyond. (Photo by Luke Runyon/KUNC) 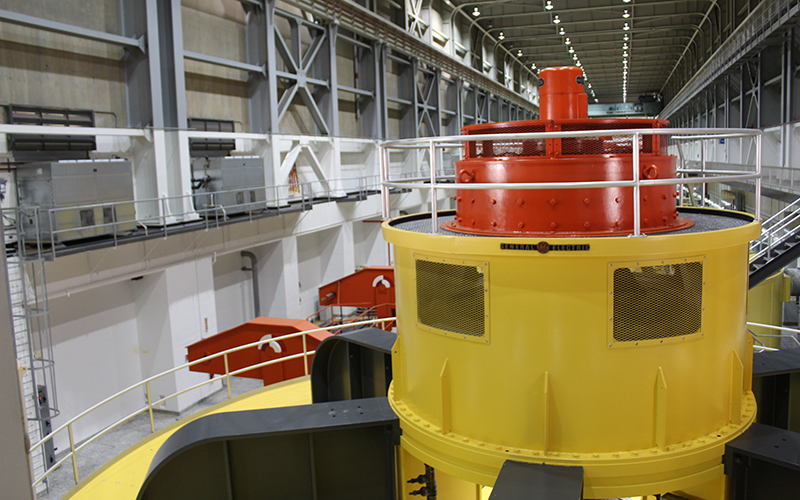 The water levels behind the Colorado River’s biggest dams are fast-approaching or already at record lows, thanks to a 21-year megadrought that’s squeezing water supplies across the Southwest. But the effects of drought are likely to start showing up in energy bills, because those dams can’t produce as much electricity.

The problem is most acute at the Upper Colorado River basin’s largest reservoir: Lake Powell. At the base of Glen Canyon Dam in northern Arizona, the Colorado River flows out cold and clear. On the canyon walls, moss grows where water from behind the dam seeps slowly through the red sandstone. The air buzzes with electricity.

“If money had a sound, this would be it,” Bob Martin said of the electrical hum. He’s the dam’s manager for the U.S. Bureau of Reclamation.

“You can hear the electricity. It’s keeping the lights on at businesses, the AC on at your home, power to the hospitals, you name it. It’s really a backbone of our society now.”

Above our hardhats, thick metal transmission lines run from the powerhouse to towers on top of the canyon. When heat waves scorch the West, as they have this year, Martin said, the dam can release more water to meet the ramped-up energy demands in such places as Colorado Springs, Colorado; Mesa, Arizona; St. George, Utah, and parts of the Navajo Nation. Many rural electrical cooperatives in the Colorado River basin also rely on Glen Canyon, as well as hydropower generated at smaller dams in Utah, Colorado and New Mexico.

“When the sun goes down and it’s still hot and the wind’s not blowing and you still have demand on the grid, people running their air-conditioning, that power has to come from somewhere,” Martin said. “That’s the benefit of hydropower is that we can turn on power within minutes to put it on the grid.”

Lake Powell is the nation’s second-largest reservoir, behind Lake Mead further downstream. Later this month, it’s projected to hit its lowest point since it first filled in the 1960s, set to drop below its previous low set in 2005. The reservoir’s level is currently at 3,557 feet above sea level. It’s projected to drop to 3,515 feet by next spring. At an elevation of 3,490 feet, hydropower production at the dam is no longer possible.

The Bureau of Reclamation last week began emergency water releases from the Flaming Gorge Reservoir in Wyoming, the first of what is expected to be a series of releases this year at successive upstream reservoirs in an effort to keep Lake Powell at a functioning level. But it is a short-term solution to a long-term problem.

Warming temperatures from climate change, and the West’s inability to conserve, are to blame. 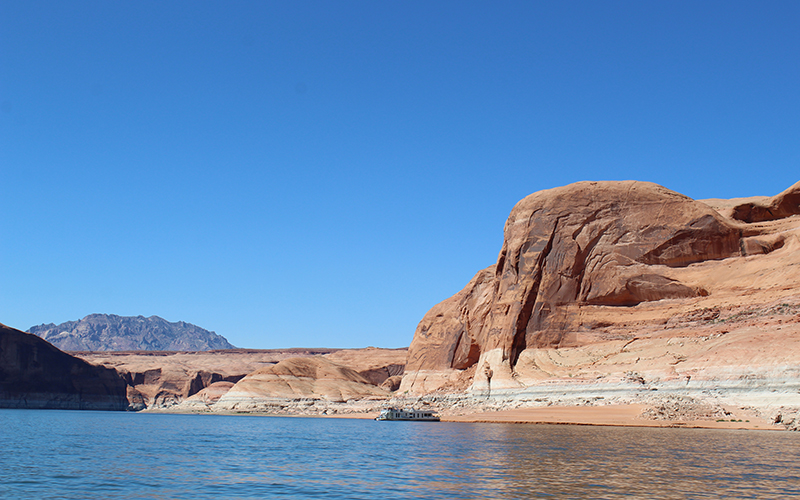 Inside the dam, water spins generators to churn out power for 5 million people in Nevada, Arizona, New Mexico, Utah, Wyoming, Colorado and Nebraska. As the lake declines, its power production does too, because there’s less water pressure to drive the turbines. The pressure that builds behind a dam and makes generators more efficient is called hydraulic head.

With a coming shortage declaration from the federal government and restrictions on water deliveries spelled out in the river’s 2007 interim guidelines, Glen Canyon Dam will pass less water in 2022, and do so with less hydraulic head, meaning its overall hydropower production is set to decline even further.

Hydropower production at Glen Canyon has dropped about 16% and its capacity has decreased about 20% since 2000.

Inflows to Lake Powell from the Colorado and San Juan rivers this year are among the three lowest on record, at 24% of the long-term average. Downstream demands and longstanding agreements among the basin states will push the lake to a historic low, with no relief in sight. Similar declines are occurring at Hoover Dam, which forms Lake Mead south of Las Vegas.

“It’s not sustainable to continue to release that volume of water when you have not that much coming in,” Martin said.

The declining water levels have sent those who market and distribute Colorado River Basin hydropower to their customers to figure out how to make up the energy deficit.

“It’s a difficult conversation in the sense that all we have to deliver is bad news,” said Clayton Palmer, with the Western Area Power Administration, or WAPA, which markets and distributes power from Glen Canyon Dam.

With the lake in decline, Palmer said, this year his agency will have to purchase millions of dollars in extra electrical power on the open market to fulfill their contracts. 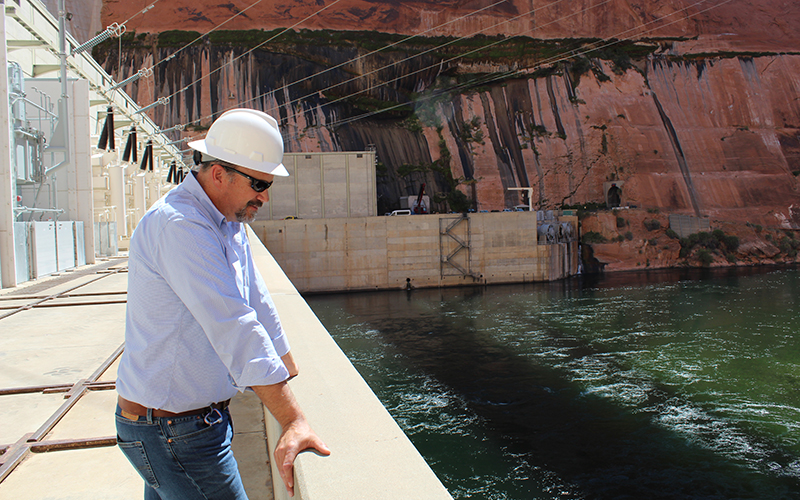 Higher power bills are on the way

“Conversations with our customers have been centered on how much less should you deliver or how much more should you raise your price?” Palmer said.

WAPA has already started the process to raise rates by 14% for at least the next two years. What makes it even harder to plan, Palmer said, is that no one is sure how bad things might get if the dry and hot conditions continue, as many climate models predict.

“Is this a set of years that are drier, which will be followed by a set of years which are wetter?” he asked. “Or has there been a systematic change in climate and hydrology in the Colorado River Basin such that we should expect these conditions to be the new normal in the case of hydropower?”

Even with 2021’s historic lows, the Colorado River’s dams still are generating hydropower. What’s uncertain is what another year as dry as this one could do to power production in the watershed.

“I think it’s been described as a slow-moving train wreck,” said Eric Kuhn, the former general manager of the Colorado River District. “Because it’s taken us 22 years to go from full to where we are.”

Kuhn says it takes a series of back-to-back dry years to put the river’s power production in jeopardy. Lake Powell has now seen two in a row. One more could set in motion a complete loss of hydropower at the reservoir.

None of this should come as a surprise, said Eric Balken of the Glen Canyon Institute, a Utah environmental group.

“I think for a lot of people, the writing’s on the wall,” he said.

Environmental groups have called for draining the lake for decades; they see its dam as a symbol of the West’s water excesses. Balken’s group wants to see Glen Canyon restored to its condition before the dam was erected.

And even if water managers don’t actively choose to let go of Lake Powell, he said, climate change could end up doing it for them.

“The Lake Powell we knew in the ’80s and ’90s probably isn’t coming back,” Balken said. “And as far as the climate data goes, you don’t have to be a mathematician to see the trend line.”

Climate scientists say temperatures are likely to keep rising, putting strains on not just the region’s water supply, but its energy grid, too.

This story is part of ongoing coverage of the Colorado River, produced by KUNC in Colorado and supported by the Walton Family Foundation.