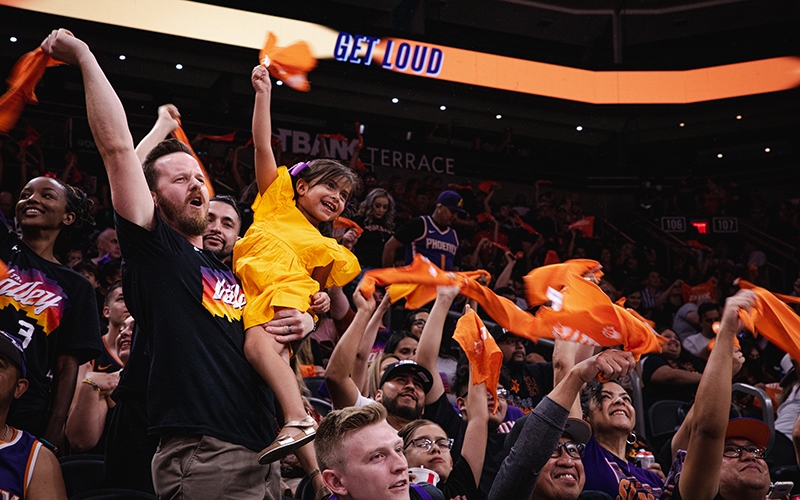 The enthusiasm for the Phoenix Suns has been a boost for local businesses that were hit hard by the pandemic. The NBA Finals are also a great marketing tool for the community. (Photo by Alberto Mariani/Cronkite News) 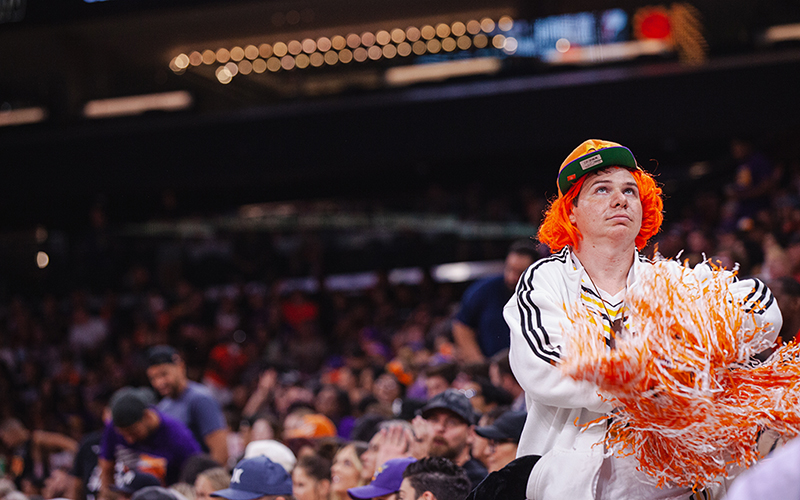 The Phoenix Suns have been in the NBA playoffs since May 23 and have captured the attention of the community. (Photo by Alberto Mariani/Cronkite News)

PHOENIX – Local businesses impacted by COVID-19 call the Phoenix Suns’ playoff run a shining light emerging from the dark tunnel of a pandemic.

Willie’s Taco Joint, which sits between Phoenix Suns Arena and Chase Field, has weathered recent economic challenges in part because its landlords, the Diamondbacks and Suns, paid half its rent during the worst parts of the pandemic, owner Eric Stoltz said. Now the restaurant is receiving a boost from a team that started playing in the postseason May 23 and will host the Milwaukee Bucks in Game 5 of the NBA Finals Saturday night.

“It was going really well, and then of course last year we had the pandemic which was absolutely brutal but we got through it. And now this year it’s starting to go really well again,” Stoltz said about the restaurant that opened in December of 2016.

Only open on event days, Willie’s has enjoyed the boost the playoffs have provided. Fans fill the building from wall to wall hoping to feel close to the action next door. There are also fans like Michael Bailey, who recently stopped by Willie’s before attending one of the Suns’ playoff games and welcomed the atmosphere.

“With the playoffs going on and baseball it’s been great,” Stoltz said. “It’s like Opening Day again and that’s awesome.”

Sporting events can make an economic difference on a community. A 2018 Homes.com study found that in all but two years over a recent 10-year stretch, the cities of either the NBA Finals winner or loser – and sometimes both – outperformed the national average in year-over-year Gross Domestic Product growth.

Although restaurants and bars are enjoying the extra business and buzz, Dennis Hoffman, a professor in the Department of Economics at Arizona State, said the most impactful part of the Suns’ playoff run may not be the immediate economic boost. 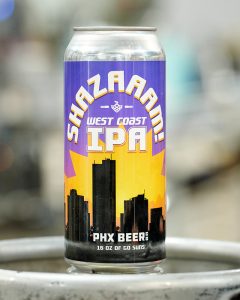 Suns play-by-play voice Al McCoy has a beer named after his famous call – Shazaam! – and can be found at the PHX Beer Co. (Photo courtesy Phoenix Beer Co.)

The NBA Finals differ from other major sports championships, like the Super Bowl, in that they do not typically bring in a significant amount of out-of-state visitors during the series.

“I do think that the impact of the NBA Finals is this imagery that people will have on the Valley,” Hoffman said. “The PR element is the big deal on this event. It’s not about the attendees, in the spending on the event per se, it’s about the PR.”

To attract more customers, some businesses are creating exclusive items just for the Suns playoff run to help boost sales.

PHX Beer Co. did. The brewery, which opened in November of 2019 by a group of native Phoenicians who had to change their sales strategy due to the pandemic, has fought hard to keep the dream of a Phoenix-based brewery alive.

“It was tough to be honest,” brewery director Adam Wojcik said. “We had a lot of luck and we’re very fortunate to have been able to keep this going and keep everyone employed.”

To join in on the Suns hype, PHX Beer Co. released a limited-edition craft brew with the can design inspired by the Suns and the Phoenix skyline.

“It’s a really exciting time for Phoenix the city and Arizona as a state for people who are fans,” Wojcik said. “We just saw that excitement and wanted to be part of it.”

The beer, Shazaam! West Coast IPA, is a nod to Al McCoy, the play-by-play voice of the Suns for the last 49 years.

“We couldn’t think of a better person to pay respect to than Al McCoy,” Wojcik said. “He’s been around for so many years and so we wanted to name it after his famous catch phrase.”

Other Suns playoff exclusives have included specialty drinks, cups and food, all paying tribute to the success of the Suns.

As fans continue to embrace the Suns and their quest for the Larry O’Brien Trophy, local businesses can look forward to continued growth as well. More than one-quarter of Arizona adults plan on seeing a Suns game in person next season, according to a new Arizona Public Opinion Pulse (AZPOP) survey conducted by OH Predictive Insights.