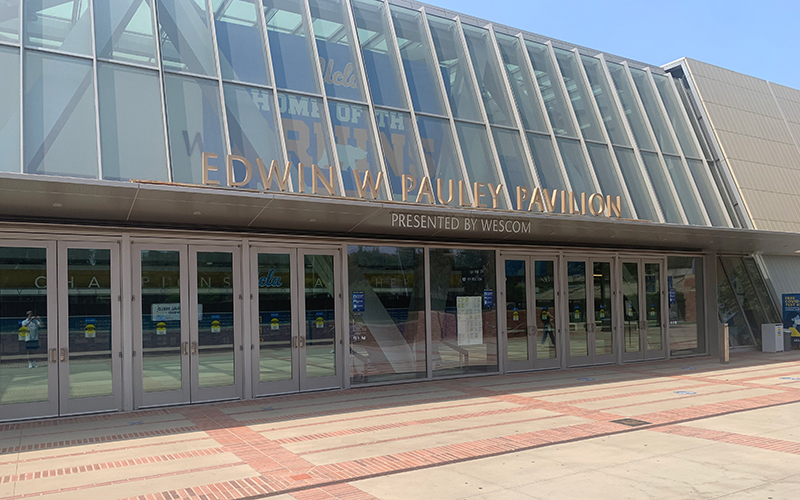 NCAA athletes now can earn money from third parties through sponsorship deals and other avenues. Pauley Pavilion is home to UCLA’s basketball and gymnastics teams, and other sports programs. (Photo by Jackson Devine/Cronkite News) 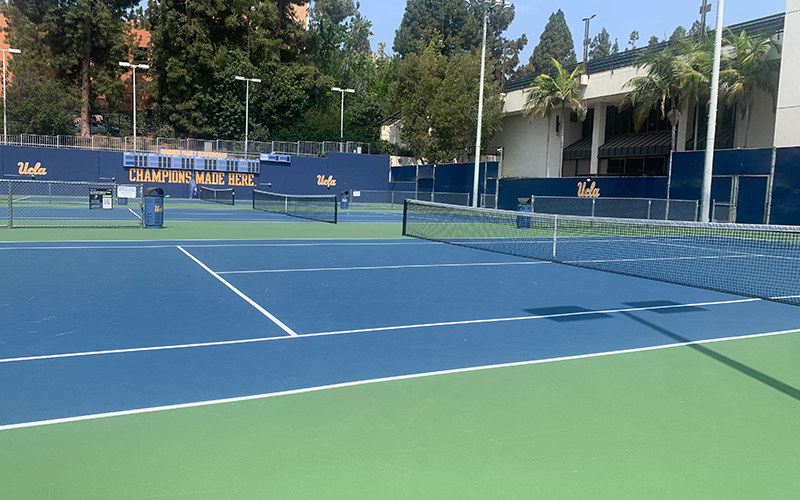 Experts say the rule regarding name, image and likeness will make the recruiting process easier for schools with well-known brands, such as UCLA. (Photo by Jackson Devine/Cronkite News)

LOS ANGELES – Southern California college athletes are making their first moves to profit off their name, image and likeness now that a groundbreaking NCAA rule has taken effect.

Here, the heated, high-profile rivalry between the University of Southern California and UCLA is only starting to pay dividends. UCLA quarterback Dorian Thompson-Robinson has generated more than $10,000 in sales from his clothing brand FriendsOverFans, according to Yahoo. While USC shooting guard Drew Peterson has become one of the first ever Barstool Athletes, an offshoot of the Barstool Sports blog.

The NCAA approved the new name, image and likeness rule – known as the NIL rule – June 30, and it took effect July 1.

“So this means that athletes can now sign with agents, they can do endorsement deals, they can monetize a YouTube channel, basically historically part of the broader rules of amateurism restricted athletes from making money from third parties,” said Victoria Jackson, a sports historian at Arizona State University who researches the intersection of sports and society.

“The big brands in college sports carry a lot of extra caveat and notoriety as well, and this was an argument the NCAA and schools have made,” Jackson said. “The coaches, the school, that brand – it kind of gives athletes a better ability to market themselves.”

Schools with storied traditions of success always have had an advantage over smaller, less-known programs, Jackson said.

“So, you know, it would be unfair if athletes weren’t able to compete for NIL,” she said.

USC wants its student-athletes to have all the information before signing any deals.

“Supporting and serving our student-athletes is our top priority,” the university told Cronkite News via email, “especially now as we enter a new era in college athletics. … Our immediate focus is on providing NIL-related education and developing an institutional NIL policy that will align with California’s law.”

The rule change also has prompted a push to clear the name of former USC running back Reggie Bush – who was stripped of his 2005 Heisman Trophy and NCAA statistics in 2010 when investigators for the association determined his parents had received impermissible benefits.

“My team and I have reached out to both the NCAA and the Heisman Trust in regard to the reinstatement of my college records and the return of my Heisman,” he said in a Twitter post July 1.

A day later, the Heisman Trust declined to do so, blaming the NCAA.

“Bush’s 2005 season records remain vacated by the NCAA and, as a result, under the rule set forth by the Heisman Trust and stated on the Heisman Ballot, he is not eligible to be awarded the 2005 Heisman Memorial Trophy. Should the NCAA reinstate Bush’s 2005 status, the Heisman Trust looks forward to welcoming him back to the Heisman family,” Tim Henning, associate director at the trust, said July 2.

The rule change also has countless former college athletes wishing it had been in place back when they played.

Former USC quarterback Matt Leinart, who won the Heisman in 2004, tweeted “I want to go back to college!”

Leinart, who was a teammate of Bush, also shared this advice to current players: