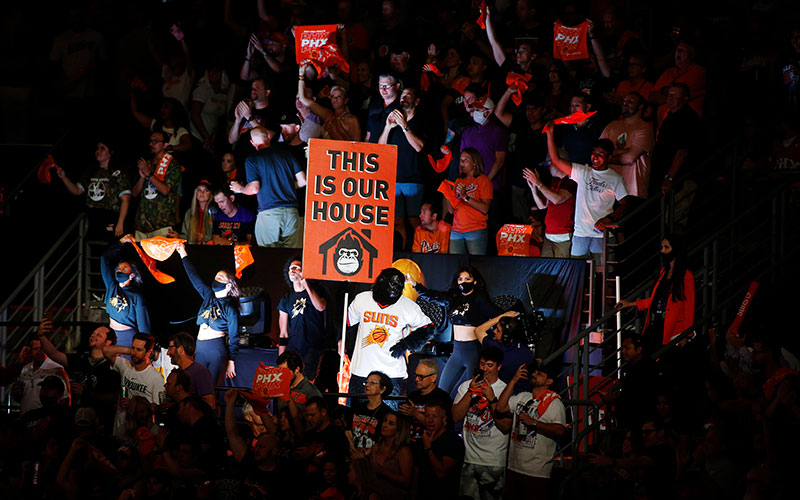 Phoenix Suns fans were giddy after the team’s win Thursday over the Milwaukee Bucks in Game 2 of the NBA Finals at Phoenix Suns Arena. The way the Suns have played suggests a sweep is possible, but some fans would like to see the team return home for Game 5. (Photo by Ralph Freso/Getty Images)

PHOENIX – The Suns’ dominant defeat of the Milwaukee Bucks on Thursday night had fans flying high, with many using #SunsinFour on Twitter to express their thoughts about how well the team might perform in this NBA Finals.

The only problem: If the Suns sweep, they would secure the title in Milwaukee rather than in Phoenix. The team won its first three playoff series away from home – defeating the Los Angeles Lakers, Denver Nuggets and Los Angeles Clippers. It leads this seven-game series 2-0.

Fans welcomed them home at Phoenix Sky Harbor International Airport after they defeated the Clippers, even though it was almost midnight by the time the team landed.

@DeandreAyton had the fans who showed up to the airport to greet them turnt!!!
.@SavageSznMedia 📸 pic.twitter.com/iIZ6E1P0ku

Twitter user @BrooksBurner1 replied to a Bucks hype video featuring Giannis Antetokounmpo, saying, “We gonna give y’all one game so we can close it out at home. suns in 5.”

Antetokounmpo has noticed the energy in Phoenix Suns Arena and is looking forward to having that edge in Milwaukee’s Fiserv Forum.

One group of Suns fans won’t mind if the series comes back home.

The Native American Basketball Invitational Foundation traditionally plays its final game at Phoenix Suns Arena. This year, it was scheduled for Saturday, July 17, the same day that Game 5 will be played if necessary.

Despite disappointment that they won’t play their championship games on an NBA court, the players from the NABI title teams will attend a potential Game 5 thanks to Robert Shippy, the owner of Rolling Plains Construction, who bought tickets for both the boys and girls champions.

“It is hard not to feel the tremendous excitement of our Phoenix Suns advancing to the NBA Finals and look at this situation as turning lemons into a real tasty batch of lemonade,” GinaMarie Scarpa, NABI Foundation’s president and CEO, said in a news release.

Now, instead of hoping for a Suns’ sweep, NABI athletes might be hoping they lose one so they can watch the team be crowned champions. 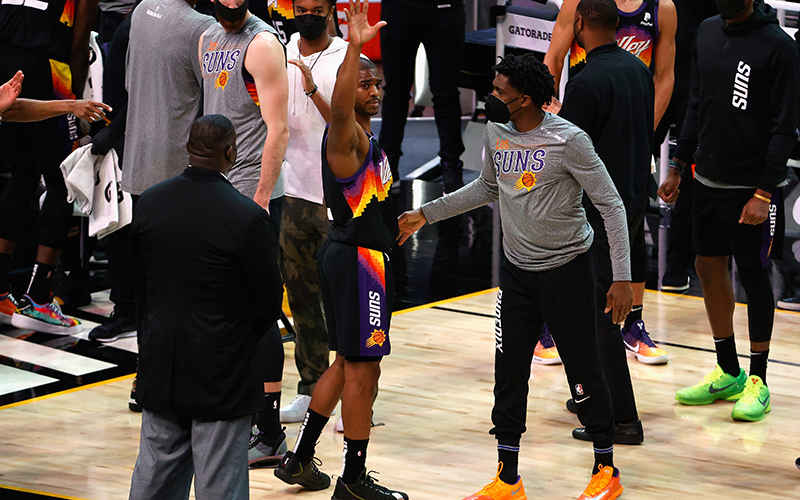 Another sweetener for a Game 5 clinch at home is the knowledge that Jerry Colangelo would be there. The Suns’ beloved former owner, a fan favorite, never won an NBA title. He’ll be heading to the Tokyo Olympics with Team USA right after the Finals.

Colangelo doesn’t have mixed emotions about a Suns’ sweep, though.

It’s difficult to sweep a team in the NBA Finals – in 75 years, it’s happened only 10 times. The Golden State Warriors were the last to do it, over the Cleveland Cavaliers in 2018.

A difficult task, certainly, but with Suns performances like those in the first two games, it could be possible.

However it ends, guard Devin Booker is grateful for the support he has received this season.

“That’s real love. That’s a relationship that it’s hard to explain in words,” he said after his team won their series against the Clippers. “I tell people all the time, ‘Phoenix is my third home.’”

If it does go to Game 5, it won’t be cheap. Most secondary ticket sites have Game 5 tickets starting at $1,000 or more.