“I don’t know a preschooler that doesn’t look at ‘Sesame Street’ and say, ‘I want to live there.’ I definitely wanted to do that,” she said.

The Phoenix resident made that childhood dream a reality in 2016, when she was selected as the puppeteer behind one of “Sesame Street’s” newest neighbors, Julia. Like Gordon’s son, Julia is autistic.

In addition to her work on “Sesame Street,” Gordon owns and operates Puppet Pie, a downtown studio at Grand Avenue and McKinley Street where she builds puppets available for purchase, and where children of all ages apply science, math, engineering and art concepts as they create puppets of their own.

Now, with help from a grant from the Arizona Commission on the Arts, Gordon and her puppets might soon be coming to your street.

Gordon was one of 24 Arizona artists awarded the commission’s research and development grants for 2021. The $5,000 grants were given to the artists to “advance their artistic practice, expand their creative horizons, and deepen the impact of their work,” according to the commission’s website.

Gordon is using her grant to bring the fun of Puppet Pie to Valley neighborhoods with a vehicle that’s already beloved by many children: an ice cream truck. Last year, Gordon purchased a 1973 step van from Conrad Martinez, owner of Misfits Cick Kustoms, who is restoring and modifying the truck to be used as a mobile puppet studio and theater.

“It will allow me to bring my art to underserved communities,” Gordon said. “Not every kid can get in a car and drive here. Not every parent has the resources to bring their kids here.” 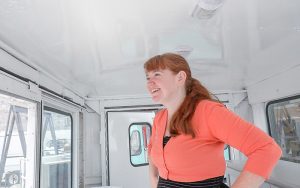 Stacey Gordon will use a grant from the Arizona Commission on the Arts to craft a full-fledged create a portable puppet theater. To create a show “the right way,” Gordon says, she would need to take time off from the puppet-building workshops, which pay her bills. “It would take me years to be able to do this if it weren’t for this grant,” she says. (Photo by Rob Winder/Cronkite News)

The truck won’t merely make the workshop activities of Puppet Pie portable. Gordon also will use the truck to put on full-fledged puppet shows for families.

“I’ve done short pieces for children. I do a lot of work with children, but it’s all workshops,” Gordon said. “This grant is allowing me to take time and build a show the right way. And bring in a story from start to finish that has a lesson in it, that does teach kids to be OK with themselves and to persevere and to try and think outside of the box.”

That ambition and sense of mission wasn’t part of Gordon’s original vision for putting her puppets on wheels. Initially, because many of her puppets are food-themed, she was simply looking for a fun way to juxtapose her booth at Phoenix Fan Fusion with the food cart she always found herself next to each year.

One morning in summer 2019 during breakfast with her family at Mel’s Diner in Phoenix, Gordon saw her destiny across the street, where Martinez had parked several of his trucks for display.

“We were talking about this trailer that I wanted to get. And we looked over and I see all these beautiful old delivery trucks and ice cream trucks from the ’50s, ’60s and ’70s,” Gordon said.

By early 2020, Gordon was ready to purchase one of Martinez’s trucks. But those plans were upended by both the pandemic and a personal tragedy.

“My husband and I went to go see the truck on January 4. And by January 9, I decided I was going to put in a down payment,” she said.

The next day, Gordon’s mother was hospitalized after suffering a stroke. She died four days later.

“So that put the brakes on everything,” Gordon said. “Everything.”

Soon after, COVID-19 threw the world into a tailspin, and Gordon worried the money she had saved for the truck would instead be needed to keep her studio afloat. She told Martinez to let her know if and when someone else wanted the truck, at which point she would have to decide whether to leave this dream behind.

“I had a big decision to make,” Gordon said. “Do I go forward with this? We’re in the middle of a pandemic. Is this the most ridiculous thing that I could possibly do? For something that I would have out at events five times a year? What is wrong with me?” 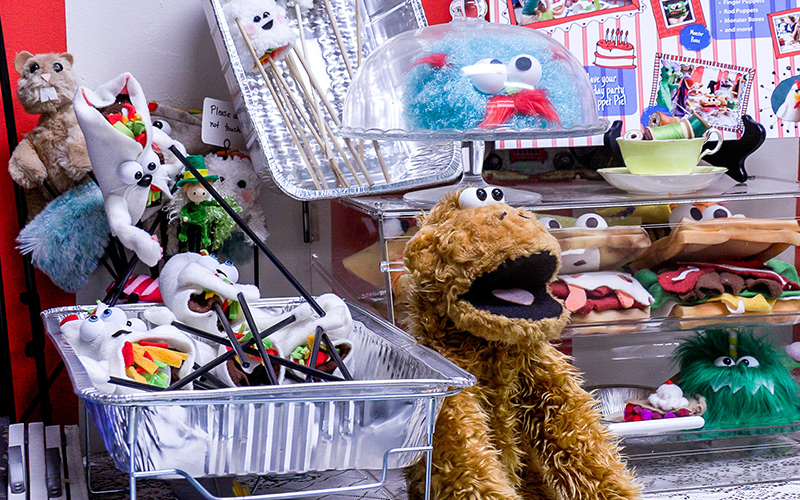 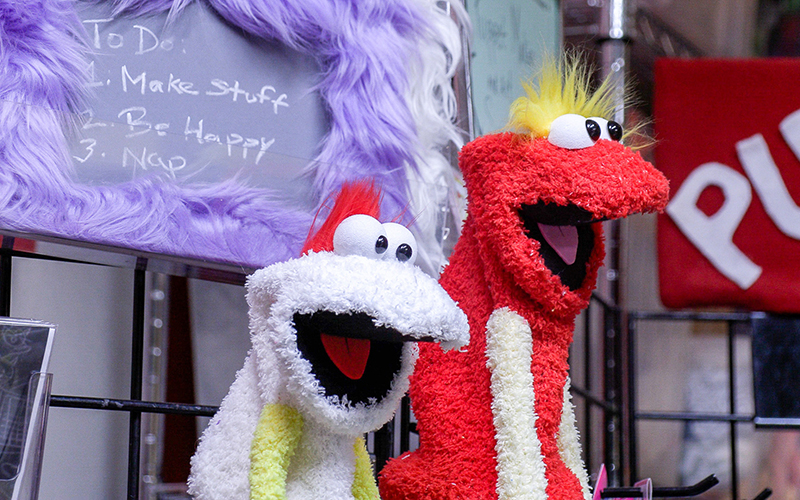 In addition to her work on “Sesame Street,” Stacey Gordon owns and operates Puppet Pie, a studio in downtown Phoenix where she builds puppets available for purchase, and where children of all ages apply science, math, engineering and art concepts to create their own puppets. (Photo by Rob Winder/Cronkite News)

But a phone call with her father changed her perspective.

“He said, ‘Well, could you use it during the pandemic?’” Gordon said.

“I thought, well, how can I rethink this puppet food truck idea into something where now I have a mobile art studio that we can do socially distanced outdoor performances?” she said. “Or post-COVID, I can go to somebody’s house and do a birthday party in the driveway.”

Gordon credits her dad with inspiring her to use the ice cream truck for something more.

“I really was just going to do just a little space where I could keep my stuff in there and then roll into a festival or fair and sell my puppets that I made,” she said.

To create the kind of mobile show she envisions now – developing a script, music and the “actors” – would require Gordon to take a couple of months off from her puppet-building workshops, she said.

But “the constant grind of doing all the workshops” is what keeps the rent and utilities paid at her studio, not to mention what allows her to make a living as an artist.

“It would take me years to be able to do this, if it weren’t for this grant,” Gordon said.

The grant will also be used to obtain the various permits she will need to hold both public and private events across metro Phoenix, as well as purchase items needed to perform. Such items include a mechanic’s stool for Gordon to sit on, small stages outfitted to the truck, an air-conditioning unit to keep her from boiling and sound equipment so she can perform for “an audience of more than 10 people.”

Additionally, the grant has also accelerated the restoration of the truck itself, which required even more work than expected, Gordon said.

When the original freezer was removed, for instance, Gordon and Martinez had expected to find rust underneath. They didn’t find it there, but discovered the rest of the truck’s subfloor had rusted completely and had to be replaced to restore the truck’s structural integrity. 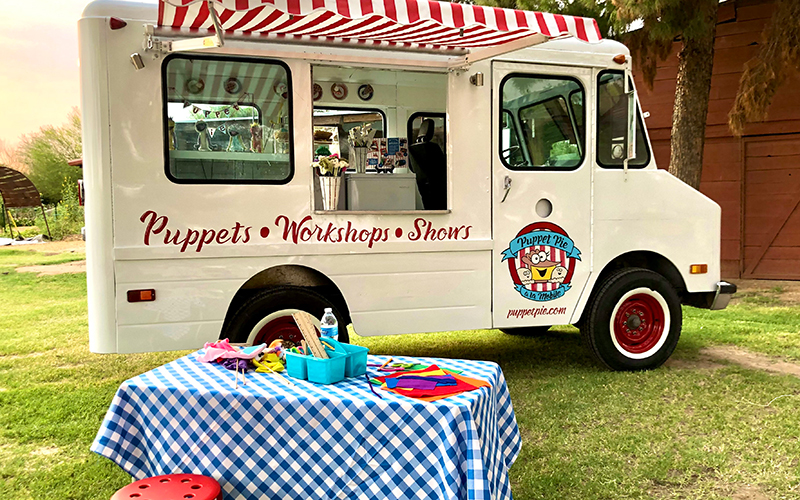 “To me, there would be nothing more fun and special than getting to come to a puppet ice cream party where you watch a show, you get to eat popsicles and ice cream and then you get to make a puppet and bring it home,” Stacey Gordon says. “And doing that in communities and making it accessible is kind of where my heart is.” (Photo courtesy of Stacey Gordon)

When it comes to getting an old ice cream truck back on the road to bring smiles in a different way, “there’s a lot that goes into it,” Gordon said.

The same should not be true of the application process for the grant, said Kesha Bruce, the Arizona Commission on the Arts’ artist program manager. Like Gordon’s truck, that process recently underwent a renovation to be less intimidating for applicants, she said.

“The goal of it was to make it so that it wasn’t so labor intensive and cumbersome, especially for first-time applicants,” she said.

Rather than use “grant speak,” applicants are urged to be their authentic selves and talk to the selection panel “like you would speak to a normal person,” Bruce said. Answers to the application questions can be given in an audio or video recording instead of in writing, she said.

But even with a simplified process, some artists might be still reluctant to apply.

“This is a grant that is for any artists at any stage of their career,” Bruce said. “So I think the biggest challenge we’re facing right now is just making sure that folks understand that they’re eligible.”

For example, although applicants are required to submit work samples, the samples don’t need to be “perfect pristine museum quality,” Bruce said. In fact, the purpose of the grant is to help artists grow so that future work samples improve over those seen by the selection panel, she said. 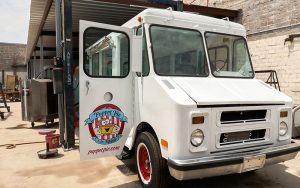 Stacey Gordon purchased this 1973 step van from Conrad Martinez of Misfits Cick Kustoms, who’s restoring and modifying it for use as a mobile puppet studio and theater. (Photo by Rob Winder/Cronkite News)

“They just want to see your passion and your heart,” Gordon said of the commission, which has been supporting artists since 1966.

Besides passion and heart – and puppets – younger patrons of Gordon’s ice cream truck probably will want to see some actual ice cream.

They won’t be disappointed. A new freezer has been installed in the truck.

“To me, there would be nothing more fun and special than getting to come to a puppet ice cream party where you watch a show, you get to eat popsicles and ice cream,” Gordon said. “And then you get to make a puppet and bring it home. And doing that in communities and making it accessible is kind of where my heart is.”

Those who have supported Gordon in following where her heart is make up an entire community in and of itself – the Arizona Commission on the Arts, her fans, fellow puppeteers, Martinez – as well as her husband, children and father.

Her mother would be supportive, too.

“The last thing I talked to her about was telling her about this ice cream truck that I had just seen,” Gordon said. “She was excited for me.”

Applications for the Arizona Commission on the Arts’ Research and Development grants for 2022 are due at 11:59 p.m. Thursday, July 8. For more information, visit the commission’s website at azarts.gov.