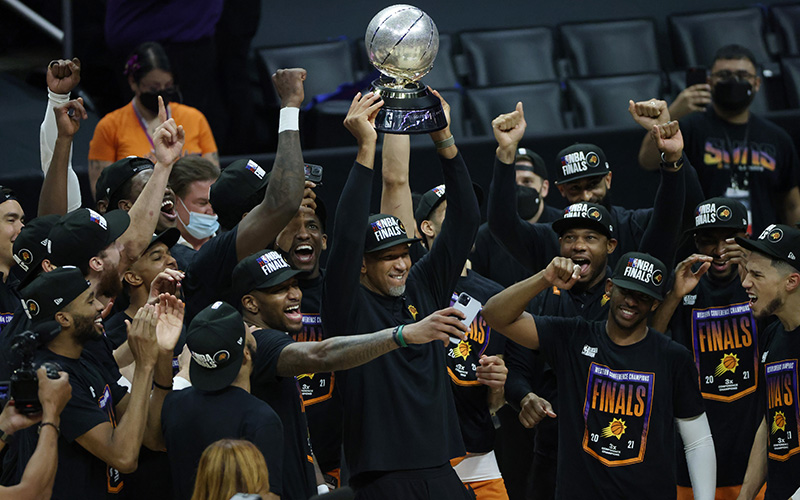 PHOENIX – Seventeen years ago, Robert Sarver purchased the Phoenix Suns for an NBA record $401 million. No one knew where the franchise was headed.

Chris Paul’s 41 points led the Suns to their first NBA Finals in 28 years, beating the Los Angeles Clippers 130-103 on Wednesday night to capture the Western Conference finals in six games.

“I was on a don’t-lose mission,” said Paul, who will be making his first appearance in the Finals. “Just a lot of emotion. A lot of going on.”

Devin Booker added 22 to help the Suns advance to their third finals appearance in franchise history. They will face the winner of the Eastern Conference series between the Atlanta Hawks and Milwaukee Bucks, who are tied at two.

The Suns will have home court advantage either way and host the first two games of the finals at Phoenix Suns Arena. They also will host the fifth and seventh games, if needed.

Tickets for the general public go on sale at 11 a.m. More information is available on the team site, Suns.com.

Stubhub already had tickets for Game 1, ranging from $540 each to $26,505 for center courtside seats.

Some travel agencies are organizing excursions for the away games and will have information available once the opponent is known.

“It’s been a long time coming,” said Booker, who also will be playing in his first Finals. “We seen the bottom, the bottom of the bottom for multiple years, and just keeping our head down. Waiting on this moment right here. Monty coming in, building the culture, him leading us with the preparation meets opportunity. That was these moments right here, and we took it and we ran with it.”

The moment isn’t only fulfilling for fans, it will provide a financial boost for the organization. The franchise already is worth $1.7 billion, according to a July study by Forbes.

For Deandre Ayton, who grew up in the Bahamas but spent much of his basketball life in Arizona, the evening was special.

“Just being here for high school, college and now the NBA, and making some noise and bringing some type of light to Phoenix, it means a lot,” said Ayton, who was dancing on the court after the game ended. “It means a lot. I’m glad to be a Phoenix Sun. Because this is the type of moments right here – like Book say, being legendary, this is it right here.

“This is just one step.”