In Phoenix, a group of residents at the La Siena senior living community are doing the same.

At 36, the Isle of Man cyclist, who had considered retiring, is eight years older than the average Tour winner. To the septuagenarians, octogenarians and nonagenarians at La Siena, they understand what it’s like to be counted out due to age. That’s why many of them are competing with residents at 31 SRG Senior Living communities in the Tour de Zest, an event designed to see who can pedal the most miles over the course of a 10-day Tour de France-themed race.

“People who are older can do anything,” Lois Goldstein, 84, said. “There is no bar to set. You set your own limits.”

No actual bikes are involved. Instead, competitors sit in chairs and use peddlers to move their legs while staying safe.

Deb Wahl, the director of zest at La Siena, said the activities department works to push against ageism with its activities. The residents don’t just want bingo, they want remarkable activities that are unexpected for people of their age.

Wahl believes people don’t have the correct idea about the older population. She has worked in senior living communities for over 15 years and is amazed at how vibrant they are compared to the societal image.

“There’s knowledge, there’s wisdom and stories, and there’s humor,” Wahl said of the residents at La Siena. “It’s all there if somebody just sits down and listens to them and takes the time to talk to them.” 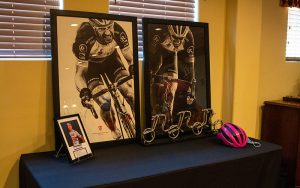 Before she came to La Siena, Shedd worked for 10 years guiding people across the United States on bikes. She said she helped many older people complete the journey. To her memory, the oldest was 83. For the Tour de Zest, Shedd leads the group in 30-minute spin classes.

“I have been inspired for years by older people,” Shedd said. “That has always been a natural thing for me to see people in older age achieve great things”

Although Shedd said they really want the Tour de Zest trophy, her main concern is the overall health of La Siena’s residents. It’s not just big events, it’s also the small things. For example, Shedd tells the residents to stand on one foot while brushing their teeth to maintain their balance.

For this event, they had a rest day on Monday after kicking off on Saturday. To keep up the spirit of both Tours, Shedd held an event where she explained the jerseys, the mental games and racing strategy.

Doris Wutscher, another La Siena resident, joined the Tour de Zest because Shedd convinced her it would be fun. Wutscher loves working out because her daughter, who is a physical therapist, told her the best way to avoid injuries and stay healthy is to keep up with exercising, but she also likes to use the library and socialize at happy hours.

She wasn’t sure if she could fit the Tour de Zest into her busy schedule. Now, she’s glad she did because she likes to sing and do the motions along with the music Shedd plays during spin classes.

Wutscher encourages La Siena residents who aren’t as engaged to try some activities.

“You’re never too old to do anything,” she tells them. 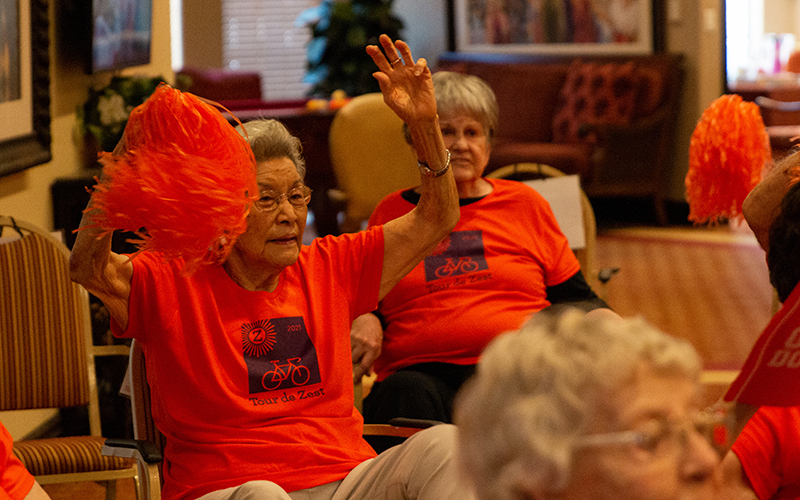 Doris Wutscher is known as the person who is always in the gym at La Siena. (Photo by Catie Cheshire/Cronkite News)

Wutscher’s efforts to get other residents involved in activities and fitness fits the overall environment of La Siena. The Tour de Zest is one of its first big activities since the COVID-19 pandemic made group activities unsafe.

Wahl is excited to get back to community events because she knows the residents love the connection. Plus, their health is based on more than physical activity – it’s also based on their mental health which is improved by socializing with others.

“If you just sit in your apartment and eat and don’t exercise you may as well just lay in your bed and wait for Him to come for you,” Goldstein said.

Golstein has a competitive spirit so part of the fun of the event for her was knowing members of other senior living communities in the SRG system might hear how well La Siena did. Residents earn eight miles for every half hour they spend peddling. As of Tuesday, La Siena was in second place. 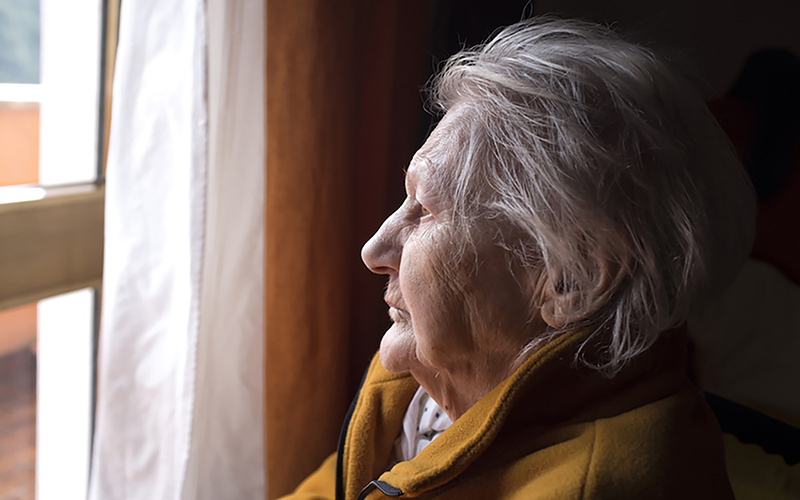 Also on Tuesday, the Tour de France riders stopped for one minute at the start of the race then proceeded at what NBC Sports commentator Bob Roll described as a “leisurely pace” for the next five to 10 kilometers before beginning the race in earnest. The riders were protesting race conditions they believe led to too many crashes.

Shedd explained the protest to the Tour de Zest riders, saying that the Tour de France’s slower pace was close to what the La Siena residents were doing on their peddlers, linking the two groups.

Another link between the groups is Brandon McNulty. McNulty, an Arizona native, is competing on the UAE Team Emirates in the Tour de France. While Shedd leads the La Siena residents in spin class, the Tour de France plays in the background and Shedd points out which of the many riders in the peloton is McNulty.

He’s in the running for the young rider classification but his teammate, Tadej Pogačar, won the last Tour de France and is also in that category.

The residents at La Siena don’t get too caught up in how old riders are. For them, age is a state of mind.