Jon Rahm is grateful for the support from fellow pro Phil Mickelson, right, as well as other members of the Arizona State athletics family. (Photo by Gregory Shamus/Getty Images)

PHOENIX – When Jon Rahm won the U.S. Open on Sunday, many members of his ASU golf family were there to support him.

One teammate in attendance was Alberto Sanchez, who roomed with Rahm in college. Sanchez lost his voice trying to cheer loudly enough that Rahm would hear him over the crowd.

“I’m so fortunate and so lucky to have been there for it,” Sanchez said.

Ki Taek Lee, who was also Rahm’s ASU teammate, is a caddy on the PGA Tour so he was there, too. So was Phil and Tim Mickelson, who played and coached at ASU respectively, and former ASU coach Steve Loy.

Rahm’s wife, Kelley, ran track and field at ASU, making her part of Rahm’s ASU family and Rahm’s literal family. She and their newborn son, Keppa, were there along with Rahm’s parents. He credits family as part of the reason he won.

The ASU golf family has tallied a lot of wins recently with the men’s team taking third at the NCAA Tournament the week after Phil Mickelson became the oldest golfer to win the PGA Championship.

Rahm added to that history with his win at Torrey Pines. He became the first Spanish player to win the U.S. Open and made ASU the first school to have alumni win back-to-back majors since 1996, when Steve Elkington and Nick Faldo did so for the University of Houston.

As soon as Sanchez saw Rahm sink his putt on hole 15, he made his way to 18, sensing that the most important moment of the day would occur on the final hole. When Sanchez heard a roar from the crowd at hole 17, he knew Rahm must have birdied.

Sanchez felt as if the whole crowd was rooting for Rahm because of the player’s deep connection to Torrey Pines. Rahm earned his first PGA Tour win on the course and got engaged there.

Right before the U.S. Open, Rahm was abruptly pulled from the Memorial Tournament after a positive COVID-19 test. To many people in his inner circle, there was a sense he might bounce back to win the U.S. Open. 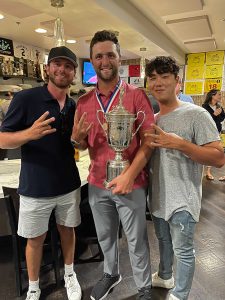 Rahm felt the same, reassuring Kelley that there was no reason to dwell on what happened.

“Something good is going to come, and I felt it today out there on the golf course,” he told reporters after his victory.

Talking with reporters in English didn’t always come naturally. When he entered ASU as a freshman, he mainly spoke Spanish.

Shay Jewett, his academic coach, said it’s challenging for international students to transition from not speaking or hearing much English to their entire lives being in English, but Rahm had teammates who supported him.

Sanchez, who was born close to the border separating Arizona and Mexico, was one of those teammates. He could tell Rahm wasn’t comfortable communicating in English so he talked with him in Spanish so he would have a friend.

“That’s always a very cool connection you can immediately feed off of,” Sanchez said.

Tim Mickelson banned the duo from speaking Spanish at one point because he knew Rahm would be more successful on the professional circuit if he mastered English. Sanchez recalls they sneakily continued to make jokes in Spanish but that he recognized Mickelson’s intention was correct.

“It was going to be something to change whether or not he’d be able to fulfill his career there and continue on,” Sanchez said. “The way he carries himself in these interviews and these conversations, the words he uses, the phrases he says, he’s one of the guys that has some of the best things to say on camera.”

One way Sanchez helped Rahm improve his comfort with English was by motivating him with friendly teasing. Sanchez said he poked fun at Rahm in English and Rahm would get frustrated because he only knew how to respond in Spanish.

Rahm worked to master the art of the comeback, teasing Sanchez back in English by the time Rahm’s four years at ASU ended.

Most, including Sanchez and Thurmond, believe Rahm could have entered the professional circuit after only two years at ASU, but for Rahm and his family, graduating was a priority, so Jewett worked with Rahm to create a four-year graduation plan – and Rahm stuck around.

Sanchez said he thinks Rahm and Mickelson probably discussed his options after his sophomore year but “I’m sure Jon was the one that actually said, ‘Don’t worry about it. I want to be here as long as I can.’”

Even when Rahm won the Pac-12 individual title his senior year he was still focused on school, joking he had to get back to Tempe to take a final when reporters asked about his future.

“I’ve put (in) a lot of hard work this year, not only to graduate and get my degree but to play the best golf I could,” Rahm said.

In many ways, Rahm was the typical college student. Jewett observed Rahm going to other sporting events and fully embracing the college experience while still focusing on golf. 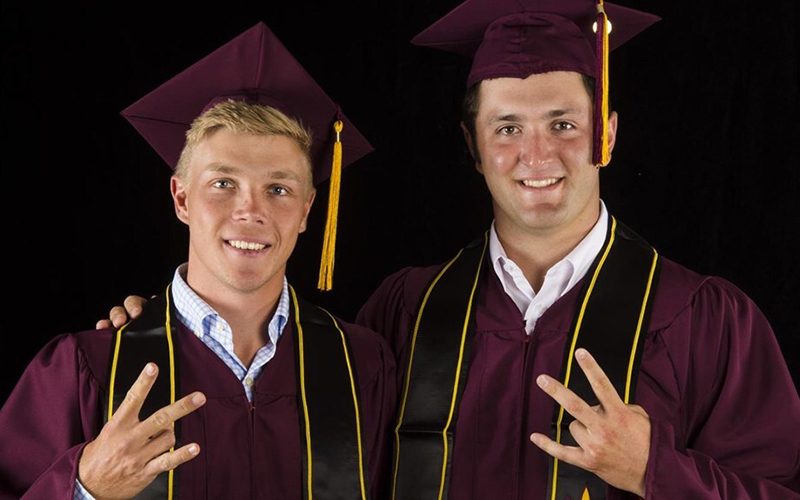 It was important to Jon Rahm, right, to earn his degree from Arizona State, which he did with former ASU teammate and All-American Max Rottluff. (Photo courtesy of ASU Athletics)

“To me he always seemed thankful for the opportunity that he had to be here, to pursue an education, to compete, to improve his game at a school where golf had a high legacy,” she said.

Rahm appreciated that Phil Mickelson, who has long been at the forefront of that legacy, was there when he won his first major, recognizing the history the two have created this season.

“For him to stay and come and congratulate me … it shows we’re really good friends,” Rahm said. “We’re extremely competitive, but when it comes time, we’re really happy for each other. I couldn’t have been happier for him when he won it.”

The respect is mutual. Mickelson recounted seeing Rahm play for the first time while he was in college.

“You knew that he was a guy that wanted it,” Mickelson told reporters. “Always wanted to know what he had to do to help the team, and he wanted to have control of that, and that type of attitude is what you’re looking for in somebody to be one of the best players in the world like he is.”

ASU boasting the world No. 1 in Rahm and one of the stalwarts of the game in Mickelson is a huge benefit to the golf program, coach Matt Thurmond said.

“You know when the whole golf world is watching that a Sun Devil is at the top and that sends a really strong message for not just our golf program, but for our university and what we’re all about,” Thurmond said.

Sanchez compared ASU golf to Alabama football, calling ASU golf one of the elite. Sanchez crossed paths with Thurmond while Thurmond was coaching at Washington so he was glad to hear the coach would take over the program once Tim Mickelson left.

“He’s been such a good addition to ASU golf,” Sanchez said. “I know there’s a championship in his future here, coming very soon.”

Sanchez said Thurmond is great at maintaining relationships with alumni, even those who predate Thurmond’s time with the program. Rahm is one of those alumni.

Though he hasn’t been around the facility due to the COVID-19 pandemic, Rahm is still finding ways to stay connected with ASU golf. He sent a video message to the team encouraging them and giving them tips the night before they entered match play in this year’s NCAA Tournament. 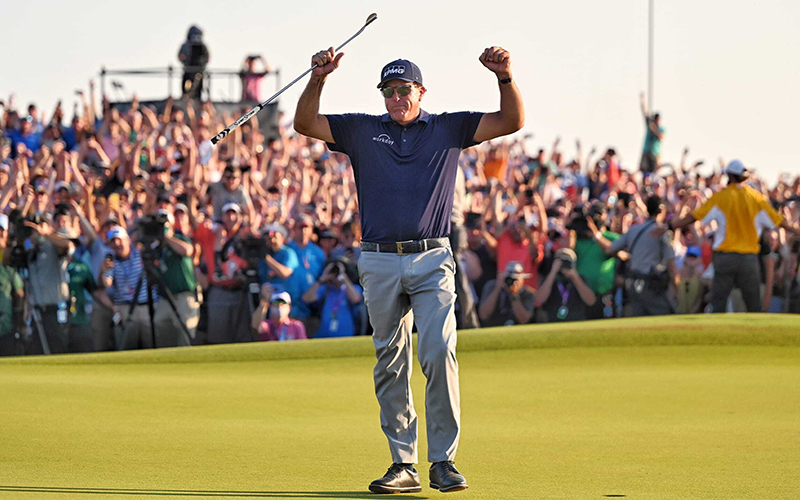 Thurmond also believes Rahm’s success helps the program recruit international students, especially those from Spain. Thurmond said that though Rahm is interested in all ASU golfers, he takes special care to be there for Spanish golfers if they ever need anything.

In general, Jewett observes that ASU athletics alumni have a strong affinity for the school, but particularly in golf, those relationships last.

“Everything that we did and the friendships and the connection that we built within Arizona State is pretty much what leads to this moment of what happened this weekend,” Sanchez said. “It’s what’s really special for all of us.”

The special nature of the day was increased because Rahm celebrated his first Father’s Day on Sunday, walking off the course to Kelley and Keppa. Tim Mickelson was also celebrating his first Father’s Day, which is just one of many factors that made the weekend feel surreal for the ASU golf community.

“You can’t make this stuff up so it’s like the perfect sort of story,” Sanchez said, adding that the victory was also a reunion of sorts since he hadn’t seen Rahm or Mickelson since their children were born out of an abundance of caution for the COVID-19 pandemic.

Thurmond said Rahm and Mickelson’s victories, the team’s third place finish at the NCAA Tournament and Chun An Yu, who graduated from ASU in May and also goes by Kevin, performing well in the Korn Ferry Tour signal the health of the program.

“It just feels like this is a really special time for Sun Devil golf,” Thurmond said.