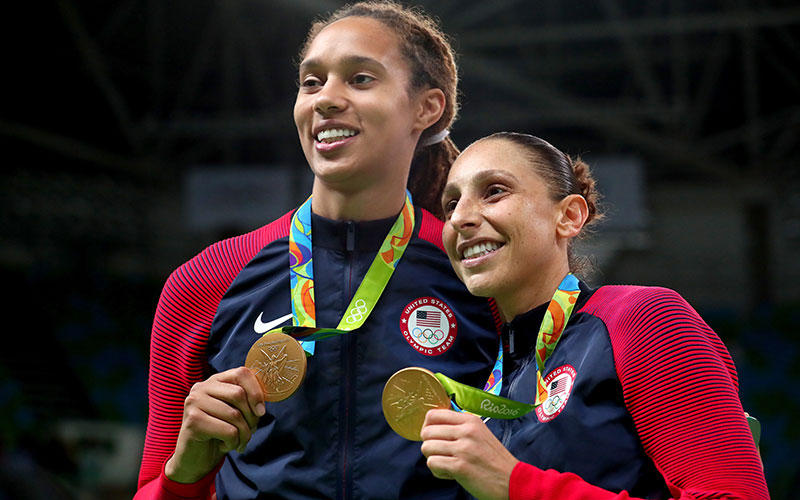 Brittney Griner, left, and Diana Taurasi flash their gold medals from the Rio 2016 Olympic Games. They learned Monday they’ll be headed to the Tokyo Olympics this summer as part of the U.S. Women’s Basketball National Team, along with teammate Skylar Diggins-Smith. (Photo by Tom Pennington/Getty Images)

PHOENIX – The Phoenix Mercury’s big three of Diana Taurasi, Brittney Griner and Skylar Diggins-Smith were named to the Team USA Women’s Basketball Olympic roster Monday. All three will be competing in Tokyo this summer as the U.S. looks to capture a seventh consecutive gold medal.

“What a wonderful thing to be able to go to your teammates to be like, you know you spent the whole year with so far,” Taurasi said. “I mean BG and Skylar played amazing, and you know no one deserves it more and so I’m super excited for them and I’m sure they are, too.”

This will be Taurasi’s fifth Olympics. Since 2004, she has played in all 32 games and has started in the past 24, bringing home four gold medals.

“I never thought after one, it would be two and after two it would be three, after three would be four. And now we’re talking about, you know, 20 years of USA Basketball, the pressure, the commitment, the time you put into it, and, you know, anything could happen, and you never know what path that’ll take you,” Taurasi said during training camp in April.

Taurasi is tied for first among all-time U.S. Olympic career record holders for game played. She holds a record of 131-7 in USA basketball games played and a perfect 32-0 record at the Olympics.

“I’ve never taken an Olympic team for granted,” she said. “It’s always definitely an honor, and it’s something I take very seriously. It’s something that I’ve dedicated my whole basketball career to and I’ve always made a concerted effort to be on the Olympic team. It’s a special moment.” 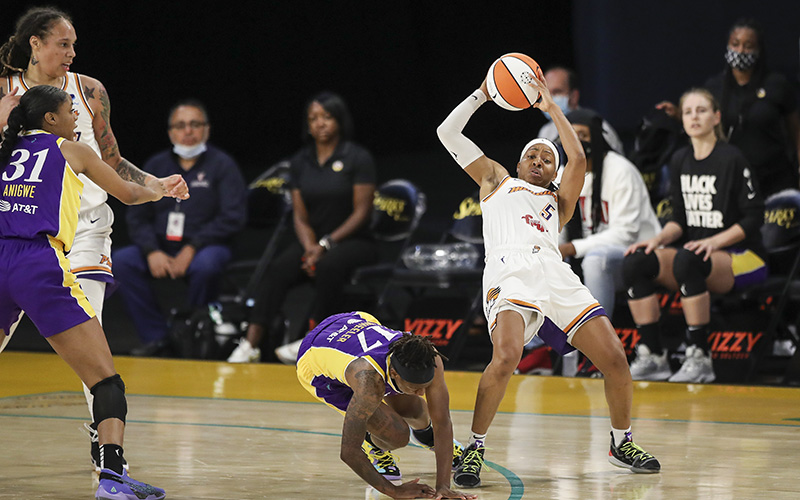 This will be Griner’s second Olympics. In 2016, she started in all eight games and averaged 9.8 points a game to help the U.S. win the gold.

Since her USA basketball career began in 2011, Griner has won a gold medal at the 2014 and 2018 FIBA World Cups, as well as being named the 2018 World Cup gold medal game Player of the Game.

“The Olympics: a whole nother level, a whole nother beast. Its top of the top it just goes up, intensity goes up, execution, every possession I learn it matters,” Griner said. “We are there to hold a legacy.”

Griner credited the veterans for their help during her first trip to the Olympics and now wants to carry an attitude of leading by example for the newcomers.

“Everybody was encouraging to me during my first go around and just letting me know different things, how they’re going to go, what to expect, different players I haven’t seen before,” Griner said. “They definitely helped me out with just the knowledge and I think that is something that I’m gonna do because it really worked well with me.”

One of these newcomers will be Diggins-Smith, who, despite never being on an Olympic roster, has had a rich history with the USA Basketball organization.

She first began playing in the organization in 2007, when she won a gold medal for the USA Youth Development Festival. She then continued to play on junior national teams before being called up in 2013 to the USA National Team. She was a finalist for the 2016 Olympic team.

For the States. For the history. For the gold.

“Obviously I got the call and I was very excited,” Diggins-Smith said. “ It’s just a great opportunity and I didn’t really know what to say, I still don’t know if it has sunk in yet but obviously, I was ecstatic. I’ve been in the system for a long time and I was 14 or 15 when I first started going out to USA B and now, I’ll be 31 this summer and to make the team has just rejuvenated me really this season.”

Diggins-Smith is looking forward to taking in the whole experience while representing her country, her family and herself well but said she has one major goal in mind.

“I want to take away a gold medal, first and foremost,” Diggins-Smith said.

In addition to Taurasi, Griner and Diggins-Smith being honored, Mercury coach Sandy Brondello and player Alana Smith will represent the Australia National Team at the Olympics. Kia Nurse is expected to represent Canada in her second Olympics.

The Mercury stars shared excitement for each other and look forward to getting to compete together and against each other.

“I got to share with D before but to be able to do it with Sky and us all (being) from the Mercury, it’s a special thing for our organization,” Griner said. “It just shows how much talent we have with our organization here and I’m happy for everybody that’s going, but you know, once we’re there, we’re opponents and not teammates anymore.”