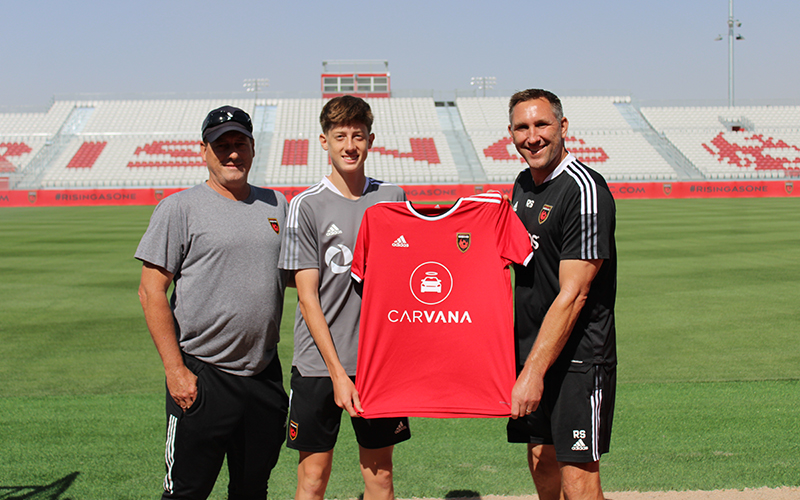 Niall Dunn was happy to show off his new jersey with his father, James, and Rising coach Rick Schantz. The 16-year-old is embracing his new path, even if it means attending school online. (Photo courtesy of Phoenix Rising FC)

CHANDLER – Niall Dunn’s path to playing professional soccer came with a lifestyle change not typical for most teenagers.

Phoenix Rising FC coach Rick Schantz spotted Dunn practicing with his academy and invited him to train with the professional team. After three months of preseason training, Dunn signed a USL academy contract in April.

Dunn’s father, James, said their family had to research what exactly an academy contract meant. A big draw was that that kept Niall’s future opportunities open, while allowing him to play with professionals.

After joining Phoenix Rising FC, Niall’s practice schedule started to conflict with his Hamilton High School courses, so he transitioned to Primavera Online School for the remainder of his sophomore year. Niall has been taking summer classes to make up for the loss of credits with the transfer. He still expects to graduate about the same time as his peers.

He is grateful for his journey and said the feeling of winning a national youth championship with the Phoenix Blackhawks, now Phoenix Rising FC Professional Academy, was the moment he knew he wanted to keep experiencing that joy on the soccer pitch.

“The path I have taken through the academy and previous years playing club, and just the hard work to play with the professional team, shows anything is possible if you put in the work,” Dunn said. “If I keep on improving, I’d want to get a college education, play in MLS or Europe – and for the national team.”

Before joining the professional team, Niall was, and still is, a member of the Phoenix Rising FC Professional Academy competing in the MLS NEXT league, the highest youth competition league in the U.S. that helps youth boys play at the professional level. And on Friday, 16 news clubs joined, increasing the competition to 24 teams across the nation.

Those playing for the academy were not allowed to play high school soccer, Niall said, but it didn’t bother him. And now being completely removed from his public high school, he said the decision has resulted in the loss of some friendships. And because safety measures are still in place due to the pandemic, his communication is mostly via social media. 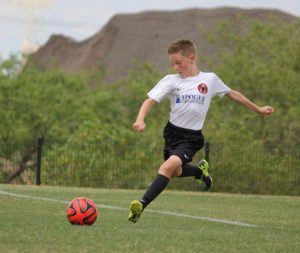 Niall Dunn excelled at soccer as a youth and caught the eye of Phoenix Rising coach Rick Schantz. (Photo courtesy of Victoria Dunn)

“It’s not going to be the path for everybody because sometimes the social needs are a little more outweighing the professional needs,” James said. “He’s made that commitment, and it has been good.”

So far, Niall is happy with the decision and knows it is key to help him play at the highest level.

“He’s a member of the pro squad but eligible for academy competition and does not lose college eligibility,” said Danny Stone, a Phoenix Rising FC assistant and academy coach.

Unlike James, who attended college before playing professional soccer for Seattle Sounders FC, his son’s path is already looking different. The one commonality is that Niall plays the same position as his father: defender.

“He has already done so much more than I ever did,” James said. “What he’s got is the tenacity, the girt, the hardcore working aspect of the game.

“It is that blue-collar workmanlike attitude, and that’s how he does his business.”

Niall is already playing with professionals, and if he hopes to attend college, he will still have an opportunity to secure a scholarship. But if Niall were to sign a professional contract before 18, some teams now allow education to be taken care of in the contract, James said.

While James is in full support of Niall playing professional soccer, when the time comes, he said, even if it means studying and playing, Niall should attend college when he’s young, instead of waiting until his professional career is over.

“At some point, the college degree will be evident because you can’t play soccer the rest of your life,” James added.

With two years of high school remaining, Niall has college on the back of his mind and is focused on navigating the professional athlete life.

“Physically he’s still a young boy, and he has to cope with playing with adult professionals who have been doing this for quite a while,” Stone said. “So physically, there is an adjustment.” 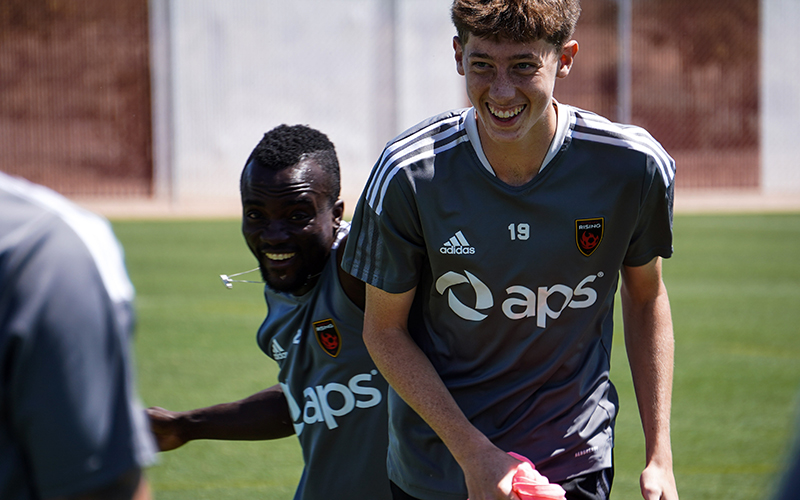 The opportunity for Niall Dunn, 16, to play with such pros as Solo Asante has been a highlight for the teen, who signed an academy contract with Phoenix Rising in April. (Photo courtesy of Phoenix Rising FC)

Niall said the transition “has been pretty easygoing, but I feel like that first week of preseason I had to bring up my maturity level because I know they are older men and they know what they’re doing.”

“Becoming more mature and able to listen to them and really take in what they’re telling me, I’m able to just fit in better than I would have been,” he added.

The help from his teammates, especially Jon Bakero, a mentor who brings much energy to practice and provides advice to improve his game, has made the transition easier.

“He goes about his work quite quietly in general, trains with a good attitude and that’s something big for a player coming into a professional environment,” Stone said.

For any youth, it takes time to get comfortable playing in a professional environment, Stone said. However, Niall’s maturity, calmness and composed nature have helped earn his respect among the players.

“Niall should be reminded of what he did to earn the opportunity and to keep doing those things,” Stone said.

As Niall develops his game, James said the focus shouldn’t be on perfection because it is not a sustainable goal. Rather he teaches his son the importance of reacting to challenges in a positive manner and learning from one’s mistakes.

Niall has yet to make an appearance, but is making the best of his opportunities whether he is on the matchday roster for the Phoenix Rising FC.

“If I’m not on the roster, I do training sessions before the game,” Niall said. He’s doing all the necessary things – practicing on his own, watching film and watching and getting the proper recovery – so when time comes, he is ready.

Stone added that if Niall isn’t playing regularly with the Phoenix Rising FC, he will play with the academy because playing matches is essential for his development.

As Nial continually works to get on the matchday roster, there comes a reminder: He’s still a kid. In fact, he’s had his drivers license for just four months, James said.

Playing FIFA on the PlayStation is what keeps him grounded and reminds Niall he’s still just 16.

“Hopefully one day, with all that emotion and power that I have, I would be able to give it out and help my team win and play professionally,” Niall said.