As wildfire season looms, some areas still recovering from 2020 blazes

Carl Nelson, one of the organizers of the volunteer cleanup in Western Colorado’s Grizzly Creek burn scar, led a team about four miles out on the trail to do cleanup and restoration work. (Photo by Alex Hager/Aspen Public Radio) 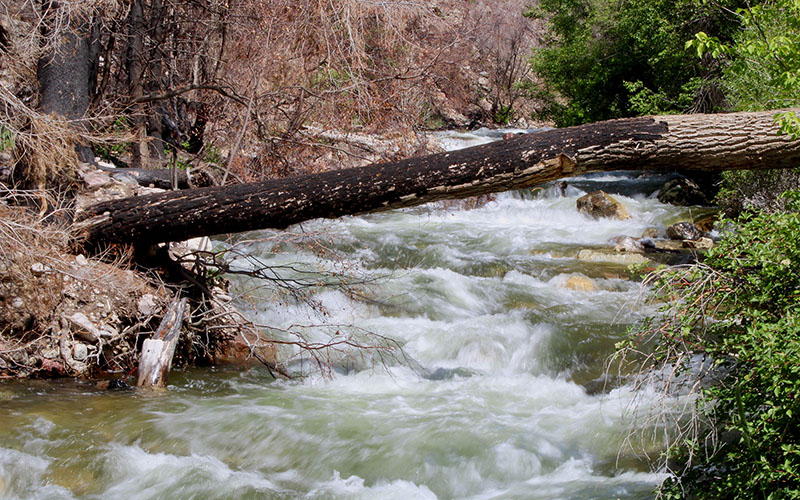 The burned area, which largely occupies the steep hillsides above Grizzly Creek and the Colorado River, poses a number of threats: It is more prone to mud and debris slides, and contaminants in it could be washed into streams and rivers. (Photo by Alex Hager/Aspen Public Radio) 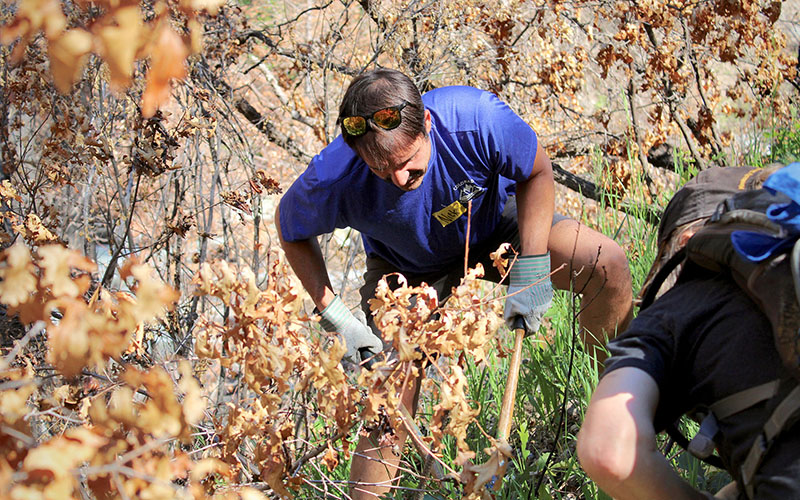 Volunteers clipped, sawed, and pruned vegetation away from the trail. That work is designed to clearly delineate the course of the hiking trail, keeping people from stepping onto adjacent plants. (Photo by Alex Hager/Aspen Public Radio) 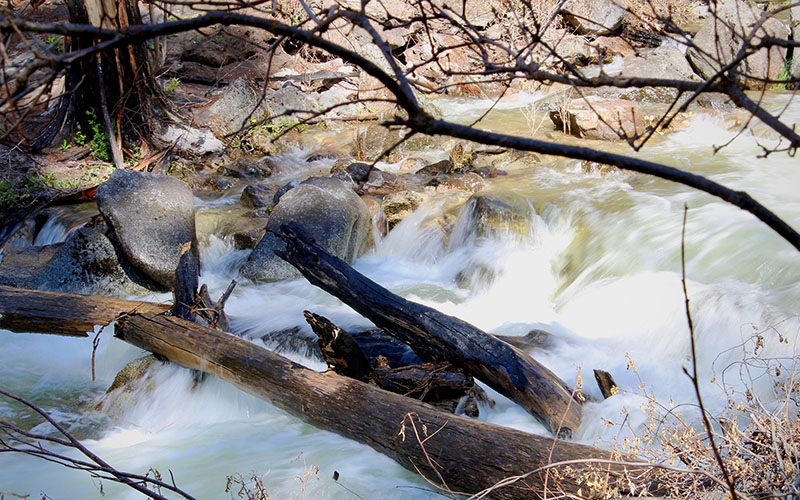 Logs and stumps, burned by the Grizzly Creek Fire in 2020, have fallen into the creek itself. As volunteers did trail maintenance, experts explained how burned areas could pollute or contaminate nearby water. (Photo by Alex Hager/Aspen Public Radio) 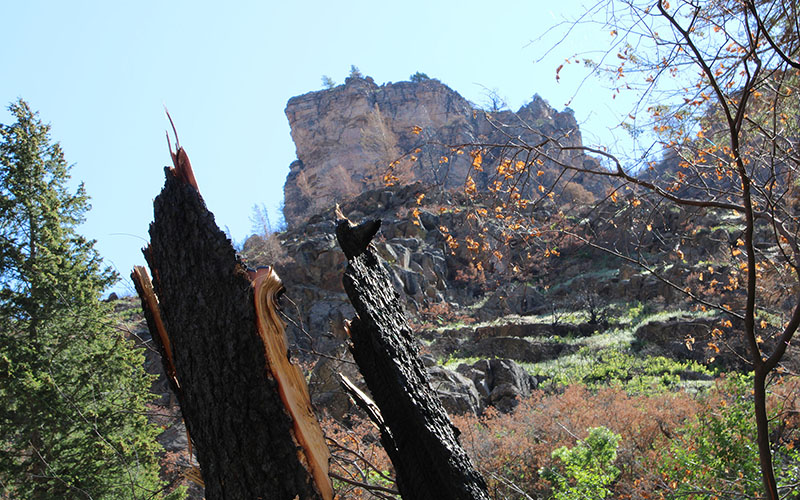 The burned area left behind by last year’s Grizzly Creek fire showed “mosaic” patterns – where some areas were left untouched and verdant, while other nearby vegetation was completely burned. (Photo by Alex Hager/Aspen Public Radio)

As the Western U.S. steels itself for another summer of dry, fire-prone conditions, some are turning their attention to recovering from last season’s blazes.

Just outside of Glenwood Springs, Colorado, restoration efforts are underway on the Grizzly Creek Fire burn scar. After burning more than 30,000 acres and shutting down Interstate 70 for weeks, the fire was ultimately controlled. But the charred zone left behind is full of recreation areas and just a stone’s throw away from the Colorado River.

On a recent Saturday morning, volunteers gathered to carry out trail work and other restorative efforts within the burn scar. As the sun cut through the morning chill, they broke into teams.

Some embarked miles up a trail running alongside Grizzly Creek, trimming, sawing and pruning along the way. That work is designed to clearly delineate the course of the hiking trail, keeping people from stepping onto adjacent plants and into wildlife habitat.

Volunteers carried tools originally designed for use in active burn areas, now repurposed as a way to clear away brush and debris from an area that burned nearly a year prior.

“We’re not trying to sanitize the wilderness,” said Carl Nelson, field coordinator for Roaring Fork Outdoor Volunteers. “We’re trying to make it a more enjoyable experience for all of our users and less impactful to the wildlife around it.”

Along Grizzly Creek – rushing loudly with spring melt – the burn scar takes shape as a “mosaic” patchwork of living, untouched vegetation, and completely charred remnants of trees and soil. Some scorched trunks and stumps had tumbled into the river itself.

The fire’s proximity to the Colorado River brought an extra level of focus to the effects of a burn on nearby streams and the river itself. Chad Rudow, water quality program manager for Roaring Fork Conservancy, said the loose, ashen soil is ripe for mud and debris slides.

Rudow explained that chemicals from the burn area could wash into the nearby creek and eventually flow into the Colorado River. Some pollutants can attach themselves to sediment and get washed into the river while tagging along with other particles.

Those contaminants are a red flag for nearby municipal water supplies, which pull from the river, as well as other water users downstream.

“The Colorado River is an incredibly hardworking river. It supplies water for 40 million people as it makes its way all the way downstream to the gulf of California,” Rudow said. “So it’s a very direct line for anything that happens here in the burn area to just make its way right into the Colorado River.”

This story is part of ongoing coverage of the Colorado River basin, produced by Aspen Public Radio, distributed by KUNC, and supported by the Walton Family Foundation.