Edward Weathersby, 41, left, his wife Stephanie Weathersby, 37, and Ryan Nguyen, 24, listen to a representative of the Disabled American Veterans organization at a job fair for military veterans on June 3 at State Farm Stadium in Glendale. (Photo by Sinead Hickey/Cronkite News) 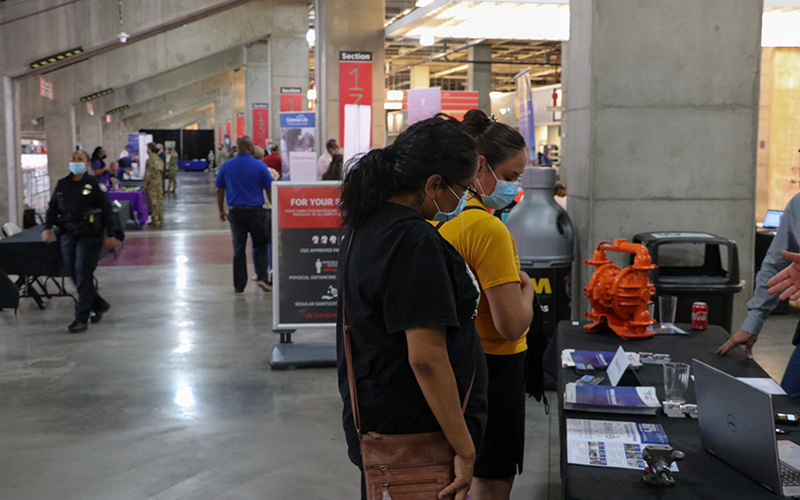 Wanda Wuanda, 31, and Wanda Claw, 29, browse the booths at the Phoenix Veterans Job Fair at State Farm Stadium on June 3. About 600,000 people are unemployed in Arizona. (Photo by Sinead Hickey/Cronkite News)

PHOENIX – Stephanie Weathersby walked through the Phoenix Veterans Job Fair last week at State Farm Stadium, looking for what many of Arizona’s 600,000 unemployed are looking for: a job.

But not just any job. Weathersby needs one that covers housing costs that “just keep rising,” she said, but “the pay range has just not budged.”

“If given a chance, I think everybody would work,” said Weathersby, 37. “I don’t believe people are lazy.”

Gov. Doug Ducey has blamed the pandemic-related uptick in unemployment payments for the struggle employers are facing to hire workers, saying in a May 13 statement, “in Arizona, we’re going to use federal money to encourage people to work, instead of paying people not to work.”

Ducey and nearly half of other state governors have acted to prematurely end the increased unemployment benefits that President Joe Biden had promised would be in place until Sept. 4.

“Gov. Ducey believes the best social program is a job, and in Arizona, unlike many other states, there are plenty of jobs available,” C.J. Karamargin, Ducey’s communications director, told Cronkite News.

Starting July 10, Ducey will stop the extra $300 per week benefit for Arizonans, using $300 million in federal funds to offer a one-time bonus of $2,000 to people who get a full-time job, while those who return part-time will receive $1,000, according to Ducey’s office. The state has also pledged to provide three months of child care assistance for workers who have filed for unemployment and earn $25 per hour or less at their new job.

“Our goal is to help and encourage unemployed Arizonans to reenter the workforce,” Karamargin said. “This is why we are offering one of the most competitive back-to-work incentives in the country, including $2,000 for individuals and assistance for child care.”

“The best social program is a job.” – President Ronald Reagan

Arizona is back to work!

Effective July 10th, Arizona will no longer be paying the $300/week federal supplement to unemployed workers, and instead we will be helping Arizonans get back to work. 1/ pic.twitter.com/lNXPhTrWxm

As of May, more than 200,000 Arizonans were receiving state unemployment benefits and pandemic assistance, compared with 1.6 million at the height of the pandemic last year. Unemployment is down in the state, to 6.7%, but remains far from the prepandemic rate of 4.7%.

Arizona pays one of the lowest weekly unemployment benefits in the country – $117 to $240. At most, with the extra stimulus amount, Arizonans collecting unemployment could earn up to $2,160 per month, which averages out to $13.50 an hour for a 40 hour work week.

By contrast, California Gov. Gavin Newsom issued a second round of $600 state stimulus checks starting in May.

Not only is Ducey reducing unemployment benefits while thousands of Arizonans still depend on them, he has reinstated job-search requirements. To continue receiving unemployment, Arizonans must prove each week that they’ve made at least four job contacts on four different days.

“Cutting pandemic unemployment insurance benefits would not just create economic inefficiencies and hurt workers who cannot find work or are unable to work, it will also drag on the economy because those benefits are supporting spending,” Heidi Shierholz, senior economist and director of policy for the Economic Policy Institute in Washington, D.C., tweeted on May 11.

Federal officials have called on states to continue support for unemployed Americans. Sunday on ABC News, Commerce Secretary Gina Raimondo called extended unemployment benefits a lifeline for Americans who are struggling and said they have meant the difference between paying rent or being homeless.

“The jobs report on Friday was a good report,” Raimondo said. “Long-term unemployment going down, wages going up, 2 million jobs created in this president’s term so far; the most jobs created ever in the first few months of a presidency.”

Although job creation is up, low wages remain a core issue for Weathersby and other jobless Arizonans. Minimum wage in the state is $12.15 per hour. In Flagstaff, it’s $13 an hour. If minimum wage had kept up with inflation since 1968, it would be $24 an hour, according to the Center for Economic and Policy Research. Fight for $15 and similar groups are demanding a $15 hourly minimum wage – which is the wage in seven states.

Whether employers will be able to create conditions enticing enough to persuade working-age adults to be a part of the labor force is questionable. Employers have said better wages could mean higher costs for goods and services.

“I’ve been here for about six years now,” Weathersby said, “and I have not seen any pay raise, and it’s significantly lower than other states. I came from California, I know that’s a huge difference, but it’s nowhere comparable.”

Experts warn that the choice made by Republican leaders – all 23 states that cut benefits are led by Republicans — may have been a political calculation. The economic research team at the financial services giant JPMorgan wrote in May that states’ decisions to opt out of pandemic unemployment insurance before Congress had set them to end appear to be “tied to politics, not economics.”

"While some of these states have tight labor markets and strong earnings growth, many of them do not." pic.twitter.com/sEq6B3MdYm 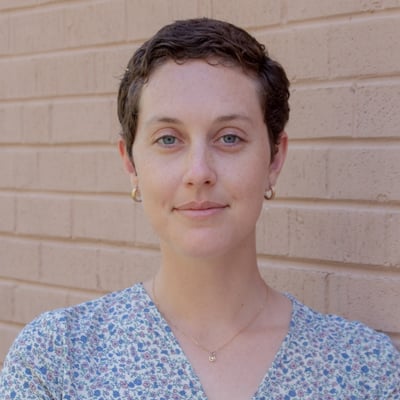 Sinead Hickey expects to graduate in August 2021 with a master’s degree in mass communication. Hickey is participating in Cronkite News this summer as a multimedia reporter.