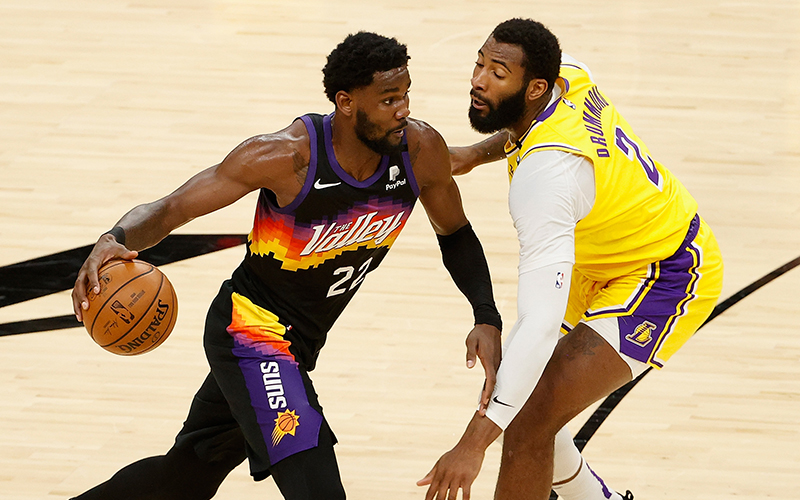 Coming into the 2020-21 season, many questioned whether the Phoenix Suns should have drafted Deandre Ayton at No. 1 in 2018. His growth this season is evident, and he has been one of the most impactful players in the playoffs. (Photo by Christian Petersen/Getty Images)

One thing was clear to the Phoenix Suns as they headed into the postseason: If they were to succeed in their opening series against the Los Angeles Lakers, Deandre Ayton would need to come up big.

Ayton is a significant reason the Suns have an opportunity to clinch their Western Conference first-round series Thursday night in Los Angeles. It is the team’s first visit to the postseason since 2010. Attendance at Staples Center remains limited because of COVID-19 restrictions.

All eyes will be on Ayton, who is averaging 17.4 points and 12.2 rebounds in the series with a jaw-dropping 80% shooting from the floor, all above his career averages.

“Winning comes before any stat. He can care less if he has 20 points or 40 or 10,” said Kyle Weaver, Ayton’s former coach at Hillcrest Prep. “The most important thing to him is winning basketball games and that’s what the Suns are seeing.”

The former No. 1 draft pick, in his third year, has had no easy task in this series. He is guarding two of the NBA’s premier players in Anthony Davis and LeBron James, along with battling the NBA’s best rebounder in Andre Drummond, who has led the league in the category four times. 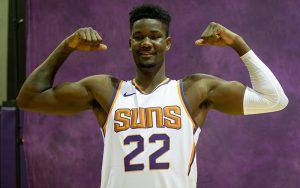 When Deandre Ayton was drafted, he was confident of his abilities to contribute to the Suns and flexed for the news media. (File photo by Justin Parham/Cronkite News)

He has made history along the way by joining Shaquille O’Neal, David Robinson and Patrick Ewing as the only players in the past 35 years to record 75 or more points and 50 or more rebounds in their first four career playoff games.

His teammates are starting to see Ayton’s approach to the game change.

“His poise and this being his first playoffs, the game gets real intense, loud and stuff like that but he just stays the course and that’s huge for our team,” guard Chris Paul said.

Ayton has been the most consistent big man on the floor between the two teams. He is sharing space with Davis, Drummond, former Sixth Man of the Year Montrezl Harrell and former Defensive Player of the Year Marc Gasol. He hasn’t backed down from any of them, which is garnering high praise from his coach.

“His focus during these playoffs has been something that doesn’t surprise me, I just didn’t expect as young as he is to be as locked in,” Monty Williams said.

Ayton credited other Suns players for their support during his first playoff series.

The key to the Suns’ defensive success is Deandre Ayton

Ayton’s new poise and focus is a result of the leadership that Chris Paul has brought to the team, Williams said.

“He’s been listening to Chris and all of our older guys when it comes to the experience and playoff mentality and everything that he is doing in the weight room,” he said. “I’ll look over in the weight room and he’s doing something … that I have never seen him do before and it’s usually something that Chris has in his program.”

Weaver isn’t surprised with Ayton’s standout play in the series and believes the 22-year-old hasn’t tapped into his full potential yet.

“This isn’t shocking at all,” Weaver said. “He is now finally getting to play on national television and people are finally realizing what he does. He’s got a winner’s mentality and he’ll do whatever he has to do to win and Deandre has not tapped into his full potential and he is nowhere near it.”

Ayton had a relatively quiet Game 5, putting up eight points with seven rebounds as the Suns routed the Lakers 115-85.

A big game tonight could help the Suns advance, which would mean another badge of honor for the young star.