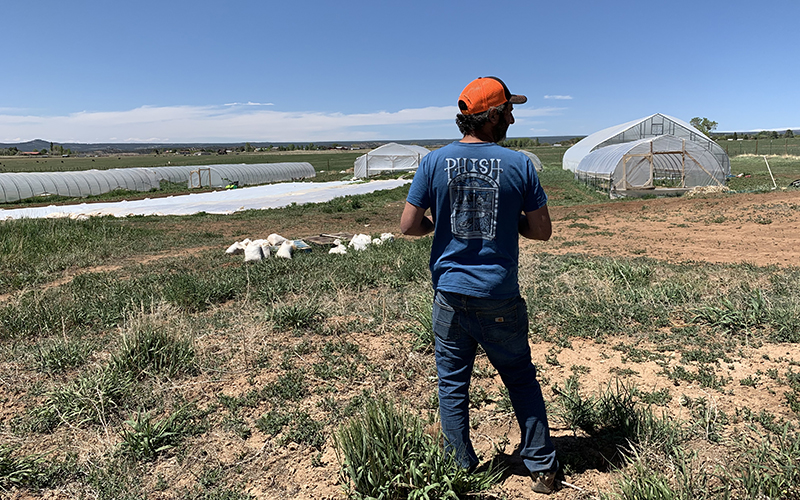 Farmer Mike Nolan is only cultivating a fraction of 1 acre this year, as opposed to past years when he’s cultivated up to 7 acres. (Photo by Lucas Brady Woods/KSJD) 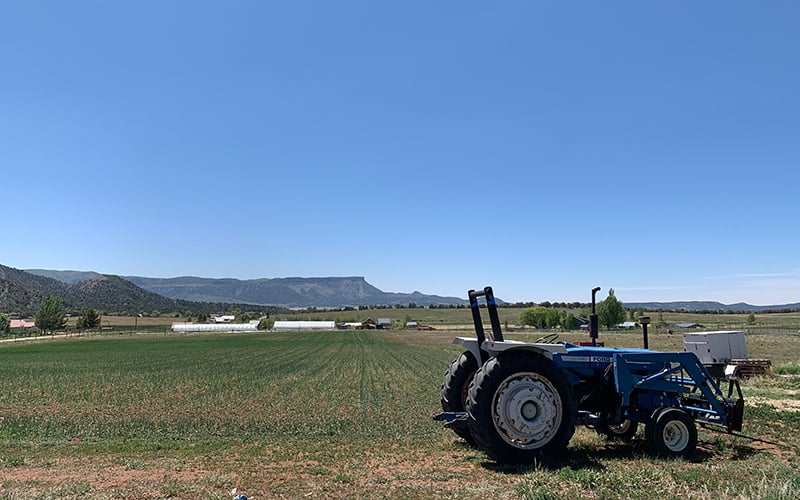 Mike Nolan said his farm in the Mancos Valley, with the bluffs of Mesa Verde National Park in the distance, has changed because of the drought. (Photo by Lucas Brady Woods/KSJD)

Mike Nolan has been a farmer for about 18 years.

His farm is in the Mancos Valley at the base of southwest Colorado’s snow-capped San Juan Mountains and across from the bluffs of Mesa Verde National Park. In a normal season, Nolan grows up to 7 acres of vegetable crops, anything from turnips to squash to tomatoes.

This season, though, he’s had to cut down to less than a single acre.

“These fields should be cultivated and prepped and looking good, but they’re covered in grass and thistle and stuff like that,” Nolan said as he pointed at one of his fields.

That’s because Nolan’s farm and all of his neighbor’s farms in the Four Corners region are experiencing extreme drought conditions, or worse. And that’s limiting irrigation water supplies the region’s farmers rely on to grow hay, wine grapes and fruit trees, and to fill livestock watering ponds.

Nearby McPhee Reservoir is fed by the Dolores River, and farmers across southwestern Colorado and the Ute Mountain Ute tribe’s farming operation rely on it. The river is expected to have its fourth-lowest runoff on record this year.

Alfalfa growers ideally need 30 inches of irrigation water per acre, per season, for their crops. This season, some farmers in the county are only getting a fraction of an inch from their reservoirs. As a result, farmers have to adjust, by selling cattle, limiting acreage or shutting down completely. And some of the sacrifices they’re forced to make can be really hard on their mental health, Nolan said.

“Sometimes you look in the mirror and you’re like, ‘Should I be doing this?’” Nolan said. “‘Like, does this make any sense?’ That stuff just builds. And it’s in seasons like this, it can crack. And that’s the scary part.”

Nolan is not the only one noticing the mental health effects that drought is having on farmers.

According to data compiled by Celebrating Healthy Communities, a Colorado-based suicide-prevention group, farmers and agricultural workers are the second-highest at-risk population in Montezuma County, where Nolan farms. That means they’re more likely to die by suicide than almost any other occupational group.

And the data show another concerning correlation.

Researchers also compared the state of Colorado’s drought data for the past decade with the state’s suicide data for the same period. When drought conditions worsened, so did the suicide rate among farmers.

JC Carrica, the CEO of Southeast Health based in La Junta, Colorado, isn’t surprised by those findings. He specializes in behavioral health care in rural communities.

He also said drought can be especially devastating.

“When you see the wind come through and shear off whatever little bit of grass you had from a quarter inch of rain a couple of days prior,” he said. “It’s kind of the carrot and the stick, and sometimes there’s just not enough carrot to keep people’s hopes high.”

Many mental health issues in the agricultural community can be compounded by a lack of services. The answer, Carrica said, is to make more of an effort to get mental health care to farmers, on their level.

Kate Greenberg is the commissioner of agriculture for Colorado.

“As we see financial stress increase, as we’ve seen, in the last decade or so,” Greenberg said. “We also see spikes in suicide rates among agricultural communities.”

Greenberg said her department is working with local partners across the state to get more resources to rural areas. What works in a city might not translate to agricultural communities. So, she said, resources such as online training manuals or public service announcements should be written with that in mind. Colorado also maintains a crisis hotline — a free and confidential mental health resource that’s available 24/7.

But as climate change continues to heat up and dry out the West’s farmland, Greenberg said the stress that comes with water scarcity will remain a challenge in keeping agriculture viable, and those who do it mentally well.

Back in the Mancos Valley, Mike Nolan said this year’s lack of water is changing his operation in a fundamental way.

“The big one was laying off everybody, which was a real bummer,” he said. “Never had to do that. It was really hard to do.”

“I just look at it as a feast or famine, we’re gonna have a hard year this year, we’ll figure it out. We’ll hope and pray that it’ll be different,” he said.

If it’s not, then he’ll take the year off, get a job away from the farm, and pay his bills, he said. Then, he’ll see what he can do when wetter conditions return.

If you or someone you know is having thoughts of suicide, you can call the National Suicide Prevention Lifeline at 800-273-8255.

This story is part of ongoing coverage of water in the West, produced by KSJD and distributed by KUNC, with support from the Walton Family Foundation.