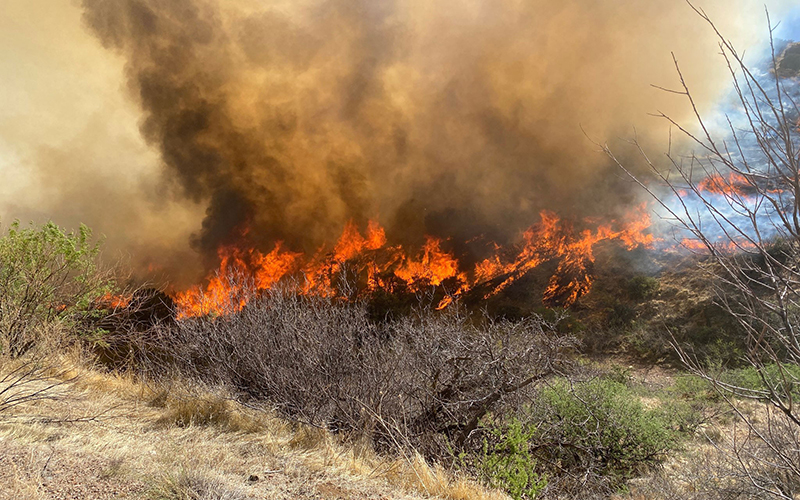 Fire officials say fire season is year-round now in many parts of the Southwest. Earlier in May, this brush fire in Copper Canyon broke out east of Phoenix. (Photo courtesy of Arizona Department of Forestry and Fire Management)

PHOENIX — A 150-acre wildfire forced evacuations in the copper mining community of Bagdad on Thursday, and fire officials on Friday said more than 25 structures had been demolished.

The Spur Fire was 50% contained at 150 acres as of Friday afternoon, and the evacuation order was lifted, according to the Arizona State Department of Forestry and Fire Management. Personnel worked to restore electricity, water and utilities after fire snapped lines and affected access.

Officials confirm that 13 primary structures, and more than 10 secondary structures were destroyed. Power was cut in the town as lines were de-energized for safety purposes.

State forestry officials said forward progress has been stopped. About 75 personnel were assigned to the fire. On Facebook, the Yavapai County Sheriff’s Office said State Routes 96 and 97 were closed.

According to the Yavapai County Sheriff’s Office Facebook page, about 570 evacuation notices were sent to people in the area. An evacuation center was established at the Bagdad High School gym, as well as Hassayampa Elementary School in Wickenburg, which is an hour away from the town of Bagdad. The town is one of only two company-owned mining towns left in Arizona.

Get ready for a busy year fighting wildfires

Sunny Parker, who runs the Facebook page Arizona Foothills 911, which alerts the public about fires and other natural disasters, emphasizes the need for vigilance against fires that threaten remote communities. Parker recommends developing familiarity with Ready, Set, Go!, a national program adopted by 15 Arizona sheriffs to educate residents about preventive measures to take before an emergency, and how to respond when communities are threatened.

“If there is one thing all of us that are living in rural or desert areas should understand, it’s that we should always be on the ready. Be prepared to leave in an instant,” Parker said.

Other tips on how to deal with an approaching wildfire include: Shutting off gas supply to your home or propane tank, closing all doors and windows, turning off air conditioning, removing debris from your roof and gutters and checking your home ignition zone and remove combustible materials from within five feet of the home, according to DangerSafety.Org.

“Our climate and weather patterns have been so strange over the last several years. What we typically see is you get sort of your spring monsoons and then … as soon as it dries out … June, July tends to be time that you have dangerous fires in that region,” said Michele Steinberg, wildfire division director with the National Fire Protection Association.

Steinberg suggests people should look at their home from a fire’s point of view to understand the vulnerabilities around the home. The NFPA has administered Firewise USA, a national program that aims to educate people on how to protect their home and neighborhood from fire.

Have their back this #MemorialDay & do your part to prevent🔥! Secure tow chains, no target shooting or fireworks on state land. Campfires prohibited in S. AZ. One spark in the dry fuel can create fast moving fires. Restriction info – https://t.co/FERcY6fwUs #AZForestry #AZFire pic.twitter.com/2tANu7bkUz