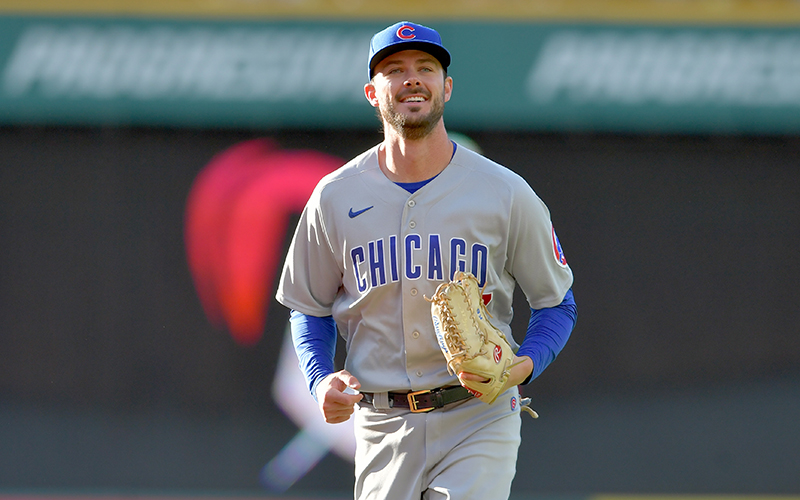 Kris Bryant was first called up by the Chicago Cubs on April 17, 2015. This allowed him to accumulate only 171 days of service time – one day short of a full year – in his first season. (Photo by Jason Miller/Getty Images)

PHOENIX – The words were light, yet poignant.

“If we would’ve had an injury problem or a COVID outbreak, you might’ve seen my big tummy out there in left field.”

That’s what former Seattle Mariners President Kevin Mather said during a video call with a local rotary club on Feb. 5, adding that there was no way any of the team’s top prospects could have made the Major League roster last September out of reluctance to start their service time clocks.

These words from Mather, along with a handful of other statements regarding the Mariners in the same meeting, ultimately led to his resignation on February 22 after the video from the Bellevue Breakfast Rotary Club surfaced. They also mark Major League Baseball’s latest instance of service time manipulation, a practice that aims to prolong the amount of time that teams retain club control of top prospects while paying them the minimum allowed by the league.

While the situation involving the Mariners’ prospects may have been out in the open, most instances of service time manipulation are relatively quiet. Teams generally don’t admit to manipulating a player’s service time and often attempt to justify keeping them down by claiming more development is needed.

Due to the nature of service time manipulation, one can only guess how widespread the practice is.

“It is your job as a (general manager) to most efficiently use the system to your benefit, and so I think every team does it,” said Zach Buchanan, the Arizona Diamondbacks reporter for The Athletic.

Service time manipulation in baseball exists largely due to MLB rules that — either deliberately or unintentionally — incentivize keeping players who are “ready” for major league competition in the minor leagues to maximize the amount of time they are under their club’s control.

Service time is the amount of time that a player has been on an active MLB roster or the injured list. A player becomes a free agent at the end of the season where they reach six years of service time. One year of service time, the maximum amount a player can gain in one season, is 172 days. A single baseball season lasts 187 days.

Simply, a player must be on a Major League roster or injured list in all but 15 days of a typical season to be able to accumulate one year of service time. This is where the manipulation can happen.

A team may decide that a prospect is ready to be called up to the majors. However, if the team decides to wait just 16 days at the beginning of a season to call up the prospect, they can guarantee that the player will not be able to accrue their sixth year of service time until the first day of their seventh season.

Waiting just 16 days to call up a player can give a team an extra season to control a player. That extra season can also be with the league-minimum salary since players do not become eligible for salary arbitration until the season after they have accumulated three years of service time.

Ultimately, the rules give teams plenty of reason to briefly delay calling up a player with high potential.

“I think that it’s a good thing that the fans can see some of the underbelly of the game and some of the issues that we have, especially leading into the end of this year and into a bargaining cycle,” Cubs center fielder Ian Happ told the Chicago Sun-Times before the season.

The Cubs are one of 15 teams that come to the Phoenix area for spring training. 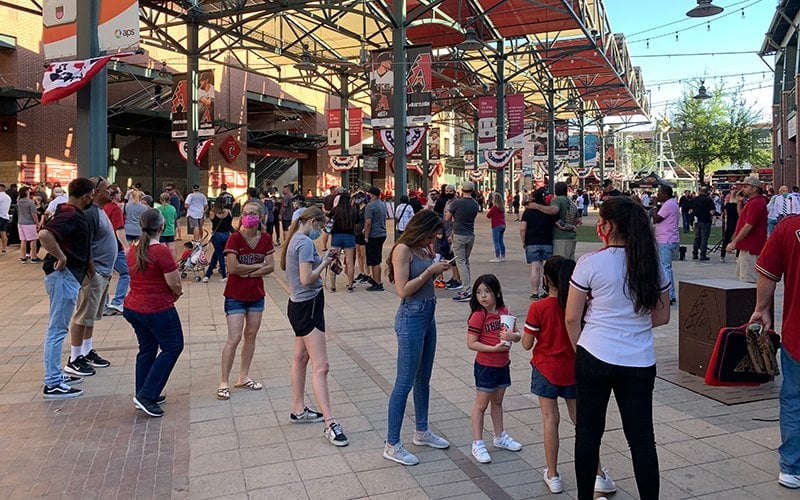 For many years, most baseball fans were oblivious to service time manipulation. But as more high profile players found themselves at the center of debate, they have found the support of fans. (Cronkite News staff photo)

Young prospects in MLB can often be some of the most talented and exciting players on the field, while also being among the lowest paid.

Simultaneously, sports can be extremely unpredictable. Players face ups and downs in their production throughout their careers, while also running the risk of having career-altering injuries every time they take the field.

It’s no mystery why players would want to cash in on their success as early as possible. This raises a moral question of whether teams should be deliberately pushing back the point at which a player can receive a salary that reflects their market value.

“Is this good for the game?” Buchanan asked. “Is it good that the system incentivizes teams to not put the best players on the field? The answer seems to be clearly ‘no.’”

By this same token, teams could argue that they have to take advantage of everything allowed by MLB rules in order to keep up with other teams and ensure competitive balance.

“If one team decides not to do it and every other team does it, that one team that doesn’t do it is going to be worse off long term,” Buchanan said. “It’s just true.”

These competing interests, with players wanting to be paid and teams wanting to get the most value out of their rosters, can lead to public rifts between teams and players. The most notable example of this would be between the Chicago Cubs and All-Star third baseman Kris Bryant.

Bryant, who is now in his final season before becoming a free agent, was first called up by the Cubs on April 17, 2015. This allowed him to accumulate only 171 days of service time – one day short of a full year – in his first season.

“The argument when they sent him down and he didn’t make the Opening Day roster was like, ‘Oh, well we want him to work on his defense so we make sure he’s ready,’” Buchanan said. “Like, what are you really seeing in 10 games that shows you, OK, now he’s ready?”

Bryant filed a grievance in hopes of being granted an additional year of service time, but was denied following an arbitration process that took more than four years, ESPN reported.

Bryant’s situation shows that service time can become a point of contention between teams and players. In addition, service time rules can also set up the potential for a situation in which teams could potentially reward a player for signing an early contract extension with the promise of calling them up to the majors quicker.

Mather mentioned in his February video call that the Mariners had offered an extension to Jarred Kelenic. The outfield prospect claims to have been told by the team that he would have debuted in 2020 if he signed an extension with the team, USA Today reported. While the Mariners denied that they made any promises for a debut, they did admit having offered Kelenic a spot on the 40-man roster.

In the end though, Buchanan says that the risk and reward for potentially damaging a relationship with a player greatly favors the team.

“When you light that fuse and when that bomb could go off is seven years apart,” Buchanan said. “So many things can happen in those seven years that if you’re a team, you’re probably saying we’ll deal with that when we get there.”

Perhaps the biggest reason why service time rules have come to the forefront lately has been the discussions on how they were to be handled during the 2020 season that was shortened due to the COVID-19 pandemic.

Although the players’ union and owners eventually agreed on a prorated service time system for the 60-game season, the highly contentious talks in the months leading up to the agreement fueled a growing sense of adversity between the two sides as the collective bargaining agreement is set to expire following the 2021 season.

The negotiations on return to play during the pandemic in 2020 were characterized by statements like this one, where the MLB Players Association used strong language, including saying “players are disgusted,” to express their displeasure with MLB commissioner Rob Manfred and the owners.

With the players’ union and owners coming back to the table to discuss a new CBA soon, could changes to service time rules be possible to eliminate manipulation practices?

Buchanan says there is potential for change in the coming labor negotiations, although the track record of talks between the players and owners makes it difficult to assume anything with confidence.

“It’s hard to know how these negotiations are going to go,” Buchanan says. “The last few times the players and the owners have had to work out something, it has not gone well. If you look at how long it took to get last season scheduled and agreed upon during the pandemic, these two sides have been pretty acrimonious so far.”

Only time will tell whether the players and owners will come together to eliminate manipulation practices, or if the two sides can come together at all at the negotiating table. In the meantime, don’t be surprised to see those early season call-ups continue.