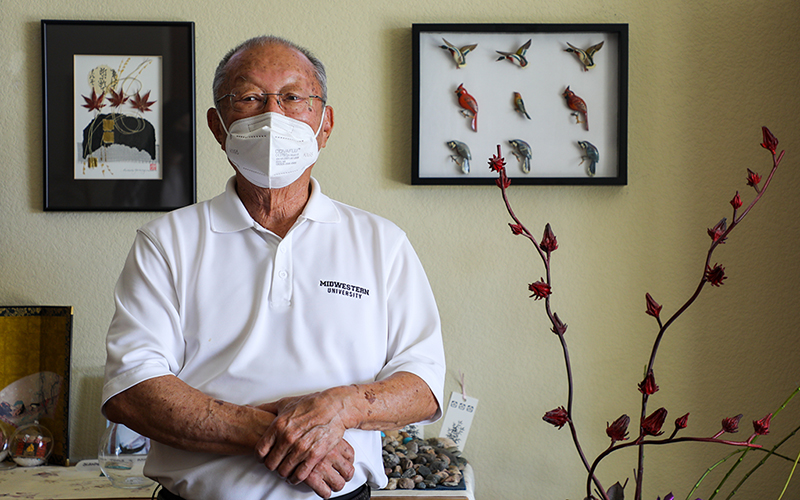 Dr. Richard Matsuishi was 4 when his family was displaced from their California home in 1942 and sent to an internment camp near Parker. He poses here in his Sun City home next to birds his parents handcrafted while imprisoned. (Photo by Alina Nelson/Cronkite News)

PHOENIX – Thirty miles southeast of Phoenix, on sacred land belonging to the Gila River Indian Community, lie the remnants of an internment camp that once housed more than 13,000 people, mostly Japanese Americans, during World War II.

Concrete foundations and cisterns remain, but gone are the fences, barracks and gun tower that revealed the purpose of the place was incarceration rather than internment, at a time when Japanese Americans were suspected of being spies and saboteurs.

“These internment camps were less like camps and more like prisons,” said Koji Lau-Ozawa, an archeology doctoral student at Stanford University whose grandparents were incarcerated there. “There’s a complicated history, but it’s important to note that.”

Gone, too, are the bases, bleachers and foul lines made of flour that represented a form of escapism for those inside the wire: baseball.

Two months after Japan bomb Pearl Harbor on Dec. 7, 1941, the U.S. government issued Executive Order 9066 authorizing the incarceration of an estimated 120,000 Japanese Americans on the West Coast. They often were given just 48 hours to sell their homes, businesses and possessions before assignment to one of 10 locations.

Two of the 10 “relocation centers” were in Arizona: three camps at Poston along the Colorado River near Parker, and two camps near Sacaton on the Gila River reservation.

Once the prisoners arrived, the camps began to take shape. Gardens were grown, sumo platforms were constructed and baseball fields were scratched in the arid soil.

These spaces were “where people felt like they could have control,” Lau-Ozawa said. “They could have their own hands on the driving wheel so to speak, and transform something without this overarching power pressing down on their backs and impacting what they can and cannot do.”

Baseball was a welcome distraction for the many Japanese Americans imprisoned at camps during World War II. The fields were often created based on what was available, such as flour used for foul lines. (Photo courtesy the Nisei Baseball Research Project)

Baseball is known as America’s pastime and its role in countries such as Japan is rarely discussed. The game was introduced overseas in the 1870s and had become popular in Japanese sports culture by 1900.

Throughout the 1920s and ’30s, leagues for Japanese Americans rose along the California coast because players of Japanese descent were yet to crack the big leagues. The popularity of these leagues grew and so, too, did the skill level of players.

Some of these players ended up at the camps, and the sport became a release for many detainees.

The idea to build a baseball field came, hesitantly, from Kenichi Zenimura, a well-known figure because of his time in the Japanese American leagues, where he earned the nickname “Dean of the Diamond.” He even led the building of fields, first at a temporary detention center in Fresno and then at Gila River after he was transferred.

When Zenimura arrived in Arizona, he was uninspired and depressed because his life was derailed, author Bill Staples wrote in his book, “Kenichi Zenimura: Japanese American Baseball Pioneer.” He eventually changed his mind, however, and helped organize and create teams to play in a camp league, using his experience and talent to run it properly.

All five Arizona camps had baseball teams that competed against each other in an intercamp league.

Zenimura’s grandson, Brandon, heard stories from his parents about that dark period of the 1940s. He never really learned what the experience was like for his grandfather, but heard about his skill level.

“He was really, really good,” Brandon said. “And a very, very intelligent player. (He) understood things about himself and about the game (and) kind of used it to his advantage.”

Kerry Yo Nakagawa, founder of the Nisei Baseball Research Project, has dug into Japanese baseball history in America for 25 years. While uncovering many forgotten aspects, he concluded that segregation with the Negro Leagues wasn’t the only issue of poor representation by people of color in MLB history.

“I really believe that we could probably have (had) a Japanese American ballplayer in the Major Leagues if not for the mass incarceration,” he said.

“But because of it, here were these Americans that kept the all-American pastime alive even from behind barbed wire, and no other immigrant race could make that statement.”

The camp teams occasionally played opponents from the outside.

One team was the Thunderbirds, a traveling all-Black baseball team. The Tucson High School Badgers, who were 52-0 at the time, reports baseballhall.org, also played against a team at Gila River and lost.

“The skill level of some of the players actually got really good because the weather allowed for it,” Nakagawa said. “They also had many obstacles to overcome, including dust storms that ended many of their games.” 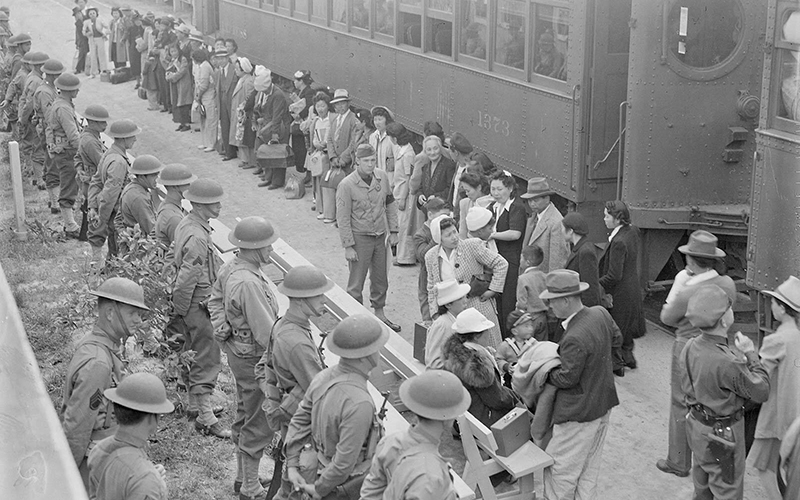 After the bombing of Pearl Harbor in late 1941, Japanese Americans were identified and relocated to 10 detention camps, some as far away as Arizona. (Photo courtesy National Archives)

Although most in the camps shared a love for baseball, the daily experiences of the detainees varied.

Dr. Richard Matsuishi was 4 when his family was displaced from their home in California in 1942 and brought to one of the three Poston camps. To him, life seemed normal because he was able to play with others his age and be with family.

“I just went along with what my parents were telling me to do,” said Matsuishi, a dentist who lives in Sun City. “I had no idea what was going on. Even after we got out of the camps, my parents never talked about the experience.”

This isn’t an isolated experience for a child during this period of history. A Japanese saying, “kodomo no tame ni,” means “for the sake of the children,” reflecting the decision by many parents and elders to shield youth from the atrocities that occurred during imprisonment.

“Their parents did a lot of things in camp to sort of protect the children from this experience,” Lau-Ozawa said. “And that’s sort of evident in the different ways that people read the landscape and their sort of reactions to it.”

The barracks at all five Arizona camps were small, overpopulated and rarely clean. Each block had 10 to 12 barracks, with most families only provided a 20-by-25 foot block to live in, according to the Department of the Interior.

Five members of the Matsuishi family shared the same block. They had a stove, some oil for heating, cots for each person and a single light bulb hanging from a cord. Matsuishi said his family found rope on which to hang blankets to give them privacy.

“The quality of life wasn’t necessarily bad in my eyes at that time,” he said. “But there were little things I picked up on that were just part of being poor. Or at least that’s what I thought.”

He remembers a store in the camp that sold toys and other items. Money was tight to buy such luxuries because wages were minimal. Matsuishi’s father worked as a postmaster for their block, earning $9 a month.

After the war ended in August 1945 and Executive Order 9066 was terminated, the family moved back to California. It wasn’t until Matsuishi graduated from college that he began understanding the abnormality of living in detention. The injustice of that time troubled him and he began researching.

“When I learned more about what really happened, it made me aware that racism is still here,” Matsuishi said. “It has stuck with me ever since.”

Matthew Weisbly, whose grandfather was imprisoned at Gila River, has visited the site five times to get a better understanding of what life was like there.

“When he got there, he and a lot of other children throughout the camps sort of called it summer camp,” said Weisbly, a fellow at the Japanese American Citizens League in Washington, D.C. “I’m just imagining the sheer dehumanization of being in this desolate place. Just seeing rows and rows of barracks and barbed wire and guard towers with their guns pointed in.

“And just imagining what my grandfather was, a little kid who didn’t know any better. He probably wondered why they were there. Why? Why was it so hot, why couldn’t they go home?” 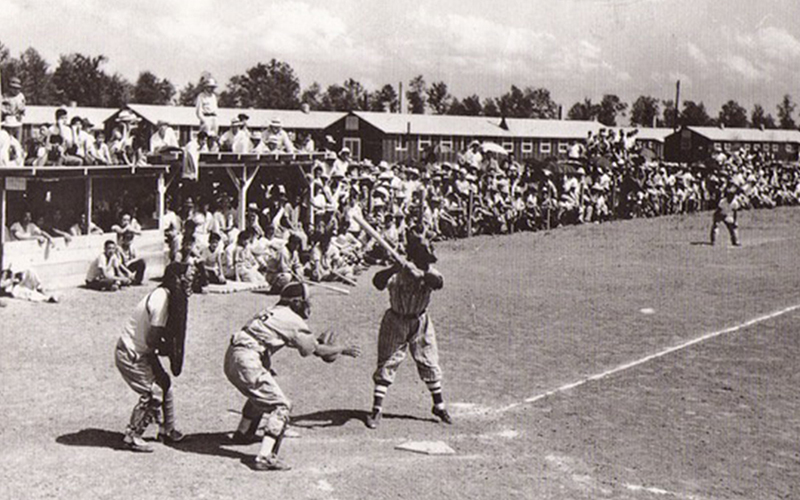 Baseball games at the camps where Japanese Americans were imprisoned often drew big crowds, as this one did in 1943. (Photo courtesy Kerry Yo Nakagaw/Nisei Baseball Research Project)

Even after Executive Order 9066 ended and prisoners were free to return home, life in the camps created a lasting legacy. There was no “normalcy” for Japanese Americans.

“I remember returning home and other kids at school who were white, Hispanic and Black often looked down upon me,” Matsuishi said. “Now every time I get weird looks or if anything feels remotely weird in everyday interactions, I always wonder if it has something to do with racism or just normal life.”

Even today, issues endure that have roots in these camps.

“A lot of us can’t speak Japanese, a lot of us have never been to Japan, a lot of us don’t have any connection back to Japan anymore,” Weisbly said. “We’ve been trying to rebuild that connection by learning about it, while also struggling with the identity of being Asian American and being Japanese American.”

The camps also created an extended barrier between Major League Baseball and Japanese Americans. The first Japanese player in the big leagues – Masanori Murakami – didn’t make it until 1964.

With violence against Asian Americans a prevailing theme in the United States, both Matsuishi and Weisbly urge people to remember the country’s not-so-distant history.

“There’s many ways to learn from it,” Matsuishi said, “so that we hold the government accountable in order to make sure travesties like the internment camps never happen again.”