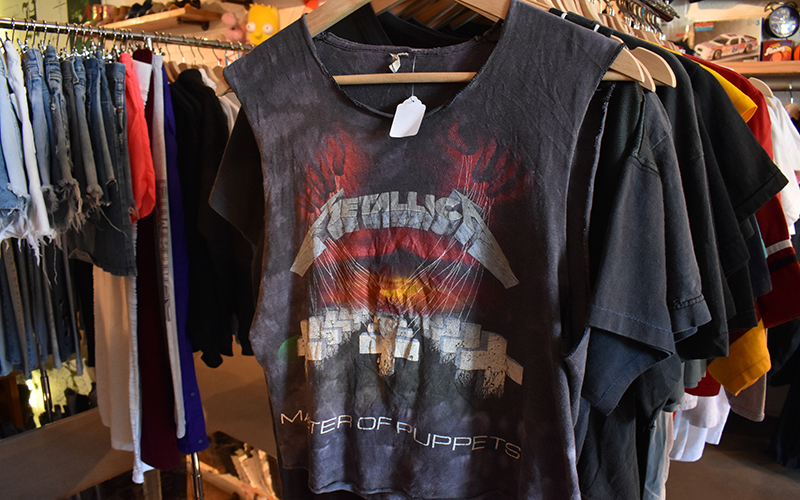 Wang’s Vintage curates and sells an assortment of band, tour and rocker T-shirts, along with Levi jackets. (Photo by Kelly Richmond/Cronkite News) 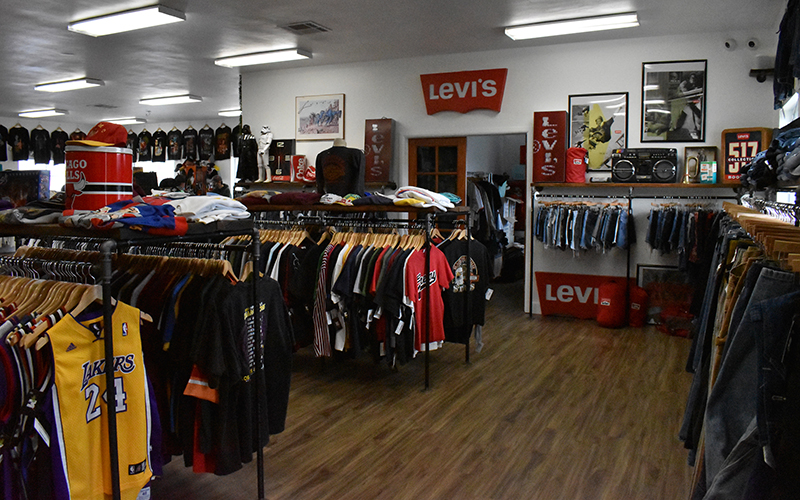 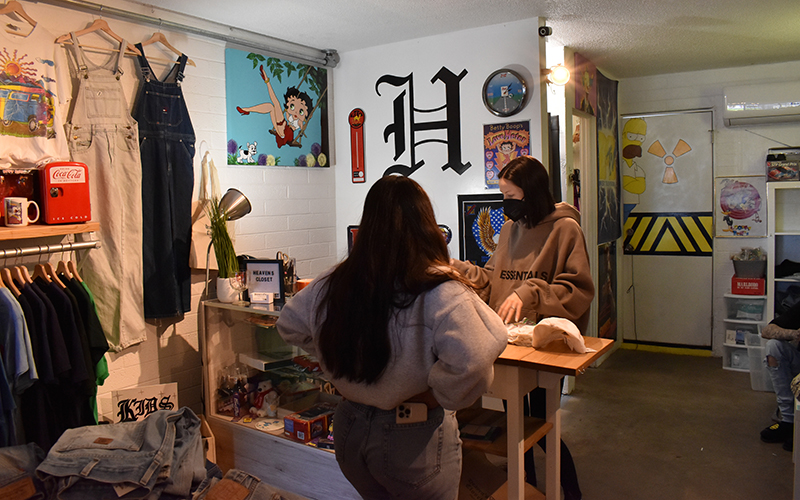 PHOENIX – Noah “Nemo” Vizzerra, 22, manager and creative director of Wang’s Vintage in downtown Phoenix, hovered over two hefty Carhartt jackets and a pair of utility pants arrayed on the floor in front of him.

His small gold chain and shock of faded blond highlights dangled just above his phone screen as he set up his frame and took a photo.

Genuine vintage Carhartt work jackets go for as much as $190, and the pants an easy $30.

He shared the photo to the store’s Instagram story, where it sat sandwiched between vintage T-shirts embossed with pop culture icons and logos, each ranging from $25 to $300.

Wang’s Vintage, established in 2019, is one of the first storefronts in Phoenix dedicated to a new wave of vintage resale that specializes in T-shirts, jeans and outerwear from the 1970s to the mid-2000s. The trend started on such resale apps as DePop and Poshmark and ballooned into brick-and-mortar shops across the country, and more recently across Phoenix.

Three more storefronts have opened up in the Valley since 2020. And a growing community of online vintage T-shirt resellers amasses sales online and through pop-up markets around the Phoenix area.

Heaven’s Closet and Ivory House Vintage got into vintage in early 2020. And in 2021, more online shops portend their entry in brick and mortar storefronts, or take to new outdoor markets, namely Pickers Playground, to trade and sell T’s.

But Vizzerra’s entrance into vintage came much earlier than most. While he was growing up, Vizzerra’s father, Steve, ran a vintage blue jean and Western wear consignment store, the Blue Jean Buyer, out of a small storefront on Scottsdale and McKellips roads in Tempe.

Vizzerra would inherit most of his know-how on vintage from his father. But it wasn’t until high school that Nemo found himself interested in vintage – and his own kind of vintage at that. 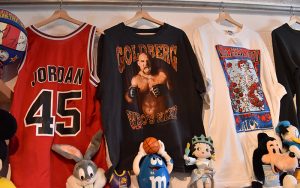 Heaven’s Closet has a wide range of vintage T-shirts, from band shirts to well known brands, similar to these Goldberg and Jordan shirts. (Photo by Kelly Richmond/Cronkite News)

His first love was old music, which grew into a passion for dated band and tour T’s. Some of Vizzerra’s favorites include Pink Floyd, Sublime and the Smashing Pumpkins.

At the same time, his older brother, Nate, 29, was starting to buy and sell high-end streetwear and sneakers. Vizzerra followed in tandem.

The two started to market their finds on the online secondhand outlets OfferUp and Depop. The brothers named themselves “Wang’s,” a common Korean and Chinese surname that they reinterpreted as a rough acronym for Wake and Grow.

They unofficially opened what would become their first store, Wang’s Closet, in the living room of their family home.

“My mom would always be in the kitchen stir-frying or cooking some bulgogi,” Vizzerra said. “There’s smoke coming from the kitchen, and people are in the living room, like, ‘Damn, that smells good,’ looking through shirts all day.”

Eventually, their mother grew tired of having fashion fiends cycling through her living room at all hours of the day, so the brothers took over a small corner of their father’s vintage store.

Wang’s Closet opened officially in 2017 after the Vizzerra brothers took over their father’s storefront in Tempe and filled a fashion void in the Valley. The store started with dealings in “hypebeast” wear, or high-end streetwear and sneakers sourced from such brands as Supreme and A Bathing Ape.

Vizzerra started collecting vintage T-shirts on the side, depending on what he’d come across. It started with music T’s then spread to more sectors of pop culture – sports, movies, TV shows, memorable characters and phenomena with a certain nostalgic pull.

He stored them in bins in the back of the store. And then those bins turned into a storage unit, and then the storage unit got out of hand. With a full stock of retro wear and a vacated storefront on Seventh Avenue in downtown Phoenix, Wang’s Vintage came to fruition in 2019.

Vizzerra separated Wang’s Vintage according to niches, with a section dedicated to each.

Although the T-shirts all share the same single-stitching and a strong sense of nostalgia, the graphics range.

Some of the most popular sects include TV and movies – with Disney shirts and Looney Tunes typically going for a pretty penny – music merch from Nirvana to the Rolling Stones, sports jerseys and fan T’s ranging from basketball to wrestling, and skatewear from such brands as World Industries.

“I know the type of people when they walk in, I know what rack they’re going to go to,” Vizzerra said.

Reselling generally gained traction with the popularization of Depop, Poshmark, Grailed and similar apps, and with renewed interest in secondhand clothing. 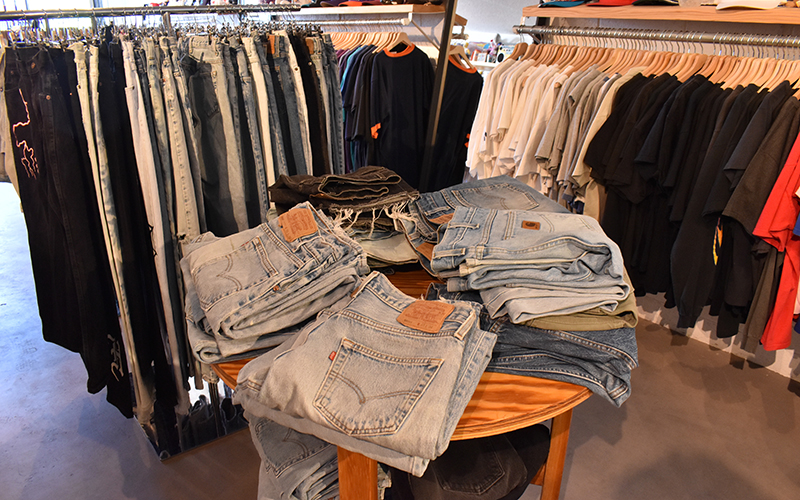 Levi jeans are just one of the brands that Heaven’s Closet carries. (Photo by Kelly Richmond/Cronkite News)

Wang’s second storefront, Wang’s Vintage in downtown Phoenix, came just ahead of the widespread popularization of vintage T-shirts and jeans. In 2019, the resale report from ThredUp predicted the second hand clothing market would double in value in the next five years as people moved away from fast fashion.

The fashion-savvy and eco-conscious turn to preowned goods, with a large group dedicated to vintage clothing. The result is both a trend in style and clothing consumption.

That trend now is on the uptick.

Industry experts at ThredUp, an online consignment and thrift store, predict the resale market will overtake traditional thrift and donation by 2024, sending the entire market to a networth of $64 billion.

The vintage T-shirt market is just a small portion of all resale. Others use reselling platforms to sell things ranging from delicate antiquities from the ’60s to contemporary streetwear.

Resellers typically source T’s from thrift stores or wholesale sellers, but the market is set aside from traditional thrift and donation. And the vintage T-shirts resale market is set apart by certain attributes – true vintage shirts typically are identified using the material, stitching and wear.

The renewed interest in vintage T-shirts retains its strength because of its universal, but varied, appeal.

“The graphics and the nostalgia are very easy to gravitate to no matter who you are,” said Allen Pettenger, reseller and founder of Pickers Playground vintage market. “No matter what you’re into, I feel like there’s a vintage T-shirt out there for you.” 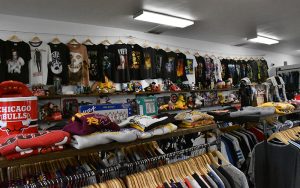 Wang’s Vintage sells vintage clothing. In 2019, a resale report from ThredUp predicted the second hand clothing market would double in value in the next five years as people moved away from fast fashion. (Photo by Kelly Richmond/Cronkite News)

“If you were to feel a T-shirt printed recently versus a shirt from the ’70s, ’80s or even ’90s, you just don’t get those soft, thin T-shirts anymore,” he said.

Pettenger started reselling in markets, pop-up events and out of his own storefront, Nothing’s New Vintage, for a short stint in California. He saw potential for more events in Phoenix after moving from Los Angeles. He thinks the trend leaks over state lines.

“Being close to Los Angeles has a direct impact on people here, and the vintage community,” Pettenger said. “Everybody looks to LA, to what they’re doing. It’s sort of a mecca.”

Markets have become synonymous with the vintage T-shirt market itself as resellers found success selling at the Rose Bowl Flea Market and the Silver Lake Vintage Flea Market in California.

“I honestly dreaded organizing an event for the longest time,” he said. “But being a seller myself, I really felt that it was important for the community that we all have a place to go sell.”

Pickers Playground evolved into a monthly event, with some breaks that depended on demand. Now, dozens of white pop-up tents and racks stocked with T’s populate the sidewalk and street outside Modern Manor in midtown Phoenix.

The pandemic brought on new financial challenges for retail everywhere. Stores across the country shuttered. And with the rise of ecommerce on traditional retail’s heels, brick and mortar stores faced a brutal financial drop.

Heaven’s Closet, a vintage store on 16th Street in downtown Phoenix, started sales on March 14, 2020, the same week as lockdowns and stay-at-home orders were spreading across the country.

The store was open for two weeks, and drew steady business. But when Gov. Doug Ducey issued Arizona’s stay-at-home order on March 30, 2020, Heaven’s Closet shut down for a month.

“It was super up and down,” owner Savanna Ruscetti said. “We don’t really know what normal is.”

Ruscetti started out selling women’s clothes online with a specific interest in what’s commonly referred to as Y2K fashion from the late ’90s and early 2000s. Ruscetti noticed the universal appeal of T-shirts.

Ruscetti soon decided to open up a storefront. She quit her job and jumped headfirst.

“I kind of had just a dream in my head,” Ruscetti said. “I didn’t know what I was getting myself into, but I knew I wanted to do it. So I just did it.”

At the time Heaven’s Closet opened, Wang’s Vintage and the Ghost Vintage held spots as established stores in Phoenix. But more stores opened up around the Valley.

“I only knew of a couple other stores and then right around the same time, like multiple others just popped up,” Ruscetti said. “They’re exploding now. They’re everywhere.”

Though storefronts keep popping up, Ruscetti doesn’t see it as cause for concern.

“Some people obviously are going to look at it as competition and at the end of the day, it kind of is,” Ruscetti said. “But everyone, from what I’ve seen, is really cool to each other and really supports each other.”