Deandre Ayton and Devin Booker have stood out as leaders on the team this season. Booker with his big-moment performances and Ayton with the dramatic strides he has taken from his rookie season. (Photo by Alina Nelson/Cronkite News)

Booker (right), here fighting to gain control of the ball after getting tangled up with Chicago Bulls forward Thaddeus Young, has led the Suns with his trademark intensity. (Photo by Alina Nelson/Cronkite News) 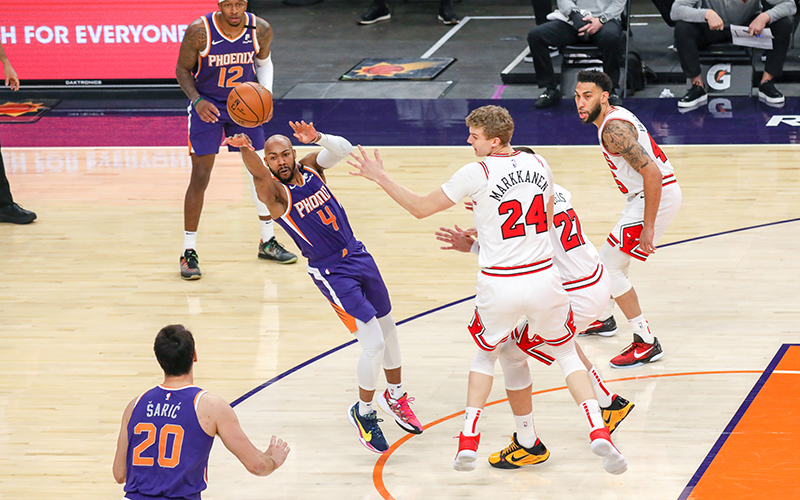 Suns guard Jevon Carter has been a valuable rotation player who has also demonstrated surprising accuracy from 3-point range. Here he passes the ball to Dario Saric. (Photo by Alina Nelson/Cronkite News) 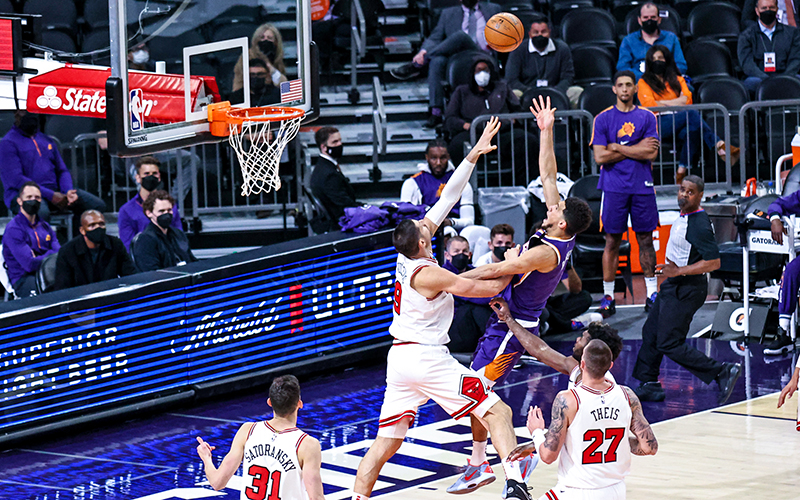 Despite his numerous accomplishments this season, many believe Booker is still disrespected nationally and sometimes by officials. Here he is fouled by Chicago Bulls center Nikola Vucevic on his way to the basket. (Photo by Alina Nelson/Cronkite News) 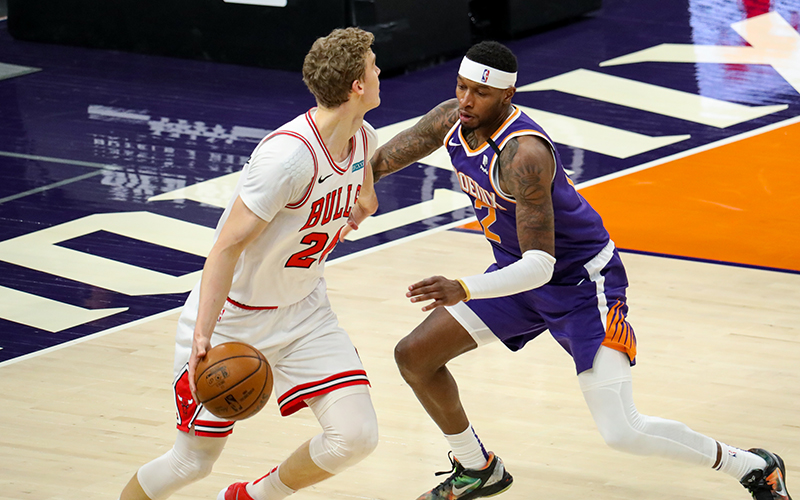 Suns forward Torrey Craig, attempting to steal the ball from Chicago Bulls forward Lauri Markkanen, was acquired for only a bag of cash but is probably the team’s best offensive rebounder. (Photo by Alina Nelson/Cronkite News) 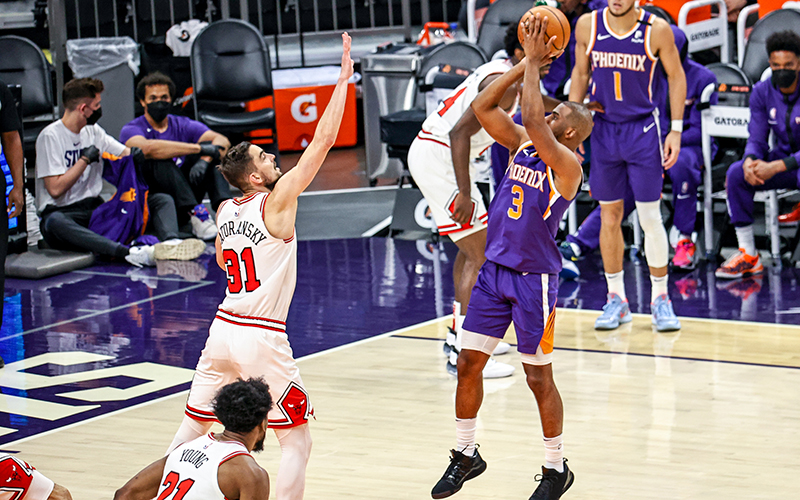 Suns guard Chris Paul has elevated the team to another level with his leadership and on-court skills. (Photo by Alina Nelson/Cronkite News) 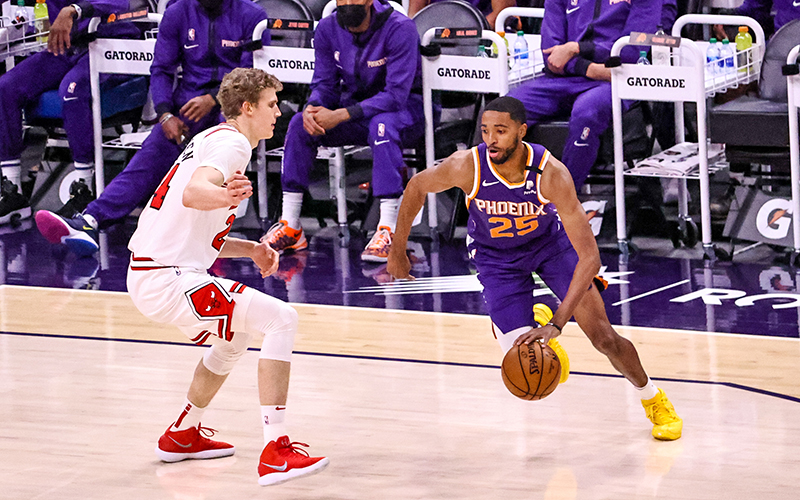 Suns forward Mikal Bridges bring a variety of tools to the table and is almost indispensable. (Photo by Alina Nelson/Cronkite News) 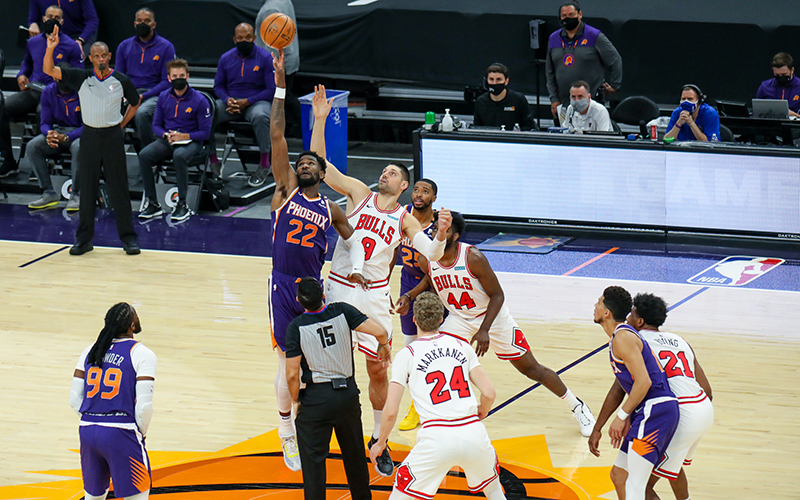 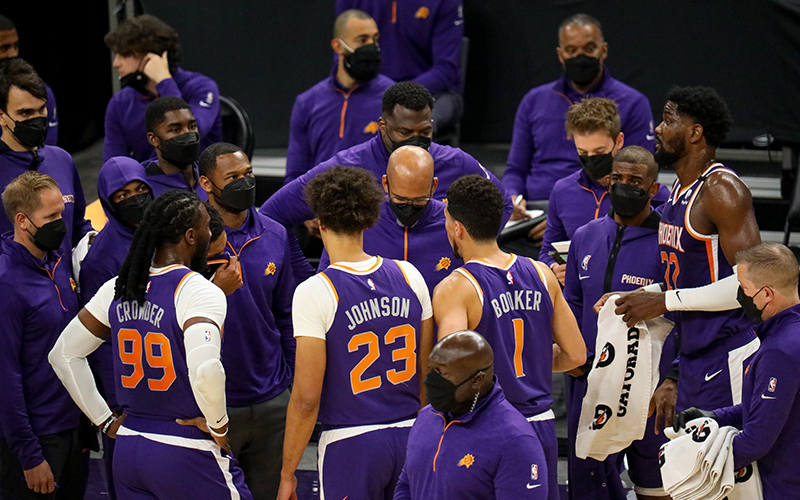 Among Suns coach Monty Williams’ strengths are his game knowledge and his transparency with his team. (Photo by Alina Nelson/Cronkite News) 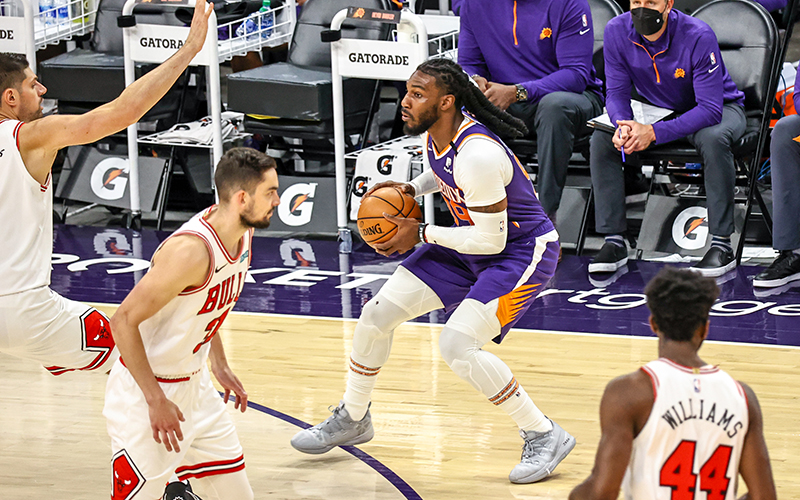 PHOENIX – In the midst of a pandemic, that Phoenix Suns have given Arizona sports fan just what they need:

Their two losses in a row – their first double defeat since January – does not reflect how the team has played this season. They rank in the Top 10 in scoring with 114.3 points per game and sit only two games behind the Utah Jazz in the Western Conference with a 42-18 record.

They lost all four of their preseason games but quickly turned their momentum around in their first regular season game against the Dallas Mavericks, winning 106-102.

A large part of the team’s success is thanks to Deandre Ayton, Devin Booker and Chris Paul. The much improved Ayton has a field goal percentage of 62.6%, while Booker leads the team in points per game with 25.3.

Chris Paul, who is in his 16th NBA season but first with the Suns, has been a standout, averaging 8.7 assists per game and a free throw percentage of 92.8%. Last Monday night, Chris Paul passed Magic Johnson on the all-time assists list, putting him in fifth place.

With their strong regular season performance so far, optimism is high that the team could make a deep run in the postseason, easing the heartbreak of fans after last season’s mixed emotions conclusion.

Despite finishing as the only undefeated team in the bubble with an 8-0 record, the Suns just missed the playoffs, losing a head-to-head tiebreaker to the Memphis Grizzlies.

It appears the Suns have built off the energy they found in the bubble last season, and a strong postseason run looks promising. The Suns’ last postseason appearance was in 2010 when they lost in the Western Conference Finals to the Los Angeles Lakers.

After losing their last two games, the Suns are looking for a win tonight against the New York Knicks in their last game of a five-game road trip.