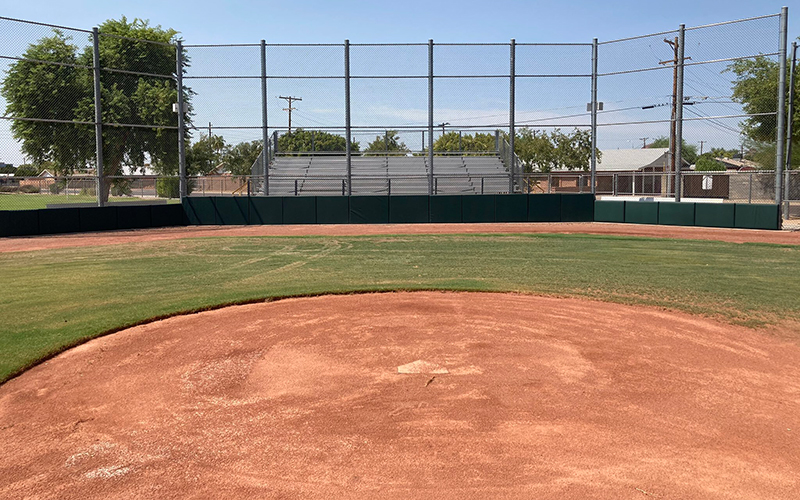 SCOTTSDALE – Many high school students spend as much time on football fields, baseball diamonds or volleyball courts as they do in the classroom.

But improvements aren’t cheap. So they asked the Arizona Diamondbacks for help.

And for a second consecutive year, Coronado was awarded the Diamondbacks’ “Chase Your Dreams” grant, a gift from the organization’s charitable foundation created to help support local high school baseball and softball programs.

The baseball and softball programs at Coronado each received $5,000 to be used for any facility upgrades the school needed.

Among the improvements Coronado made to the baseball field are new backstop padding and padded dugout railings, windscreens for the outfield and laser leveling of the playing surface. All of the enhancements were aimed at improving safety for the players, which the school considered its No. 1 priority.

“I needed to know that our kids were safe out here,” Miller said.

Prior to the upgrades, there was nothing shielding the dugout from foul balls and nothing stopping players from running into the metal support poles.

During his time as an assistant coach in Illinois, Spaniak said he saw a player hurt in that exact scenario, so adding the padded railings in front of the dugout was a priority.

After receiving the grant, Spaniak put dozens of hours of work into the field to make sure that the field and facilities would be ready when high school baseball resumed.

“We’ve done everything we can to build a facility that the kids would be proud of,” Spaniak said.

The athletes have taken notice, not only of the upgrades themselves, but the effort and commitment made by Spaniak to the program.

“He was still out here doing everything he could,” said senior infielder and pitcher Destination Salazar. “He’s been doing a lot of work. He’s a great man; we’re very happy to have him. He’s a great dude, and I can’t wait to see what he does with the program years down the line.”

Spaniak and Miller each credited the other, with Miller noting the work that Spaniak put into making the facilities what they are today, and Spaniak voicing appreciation for Miller’s support in the project.

“(Athletic Director) of the year, in my opinion, by far,” Spaniak said of Miller.

And everyone affiliated with the project is appreciative of the Diamondbacks for giving schools like Coronado an opportunity to upgrade facilities for student-athletes.

“For them to support a program like us two years in a row. … That’s helped our coaches on a level that will probably never be matched again, and they are unbelievably grateful.” Miller said.

While some high school athletic programs across the country are focused on state championships and producing Division I prospects, Spaniak and his staff are more interested in helping their players get the most out of their high school experience.

“That’s not even in my mind,’ Spaniak said of championship trophies. Instead, Spaniak is just focused on building a respectable program that serves Coronado’s student athletes, and he believes the facility upgrades will bring more of them out.

“(It’s) kind of like, if you build it, they will come. That’s our process right now,” Spaniak said.

“I tell these guys, ‘You know, baseball is going to end for you at some point. Don’t have any regrets. Go do things. Put yourself out there and have fun with your friends.’”

The Dons picked up their first victory of the season Friday and take on Cortez High today.