Zhane Atene, right, and her younger sister, Leighan, fill plastic containers with water to haul back home in this 2017 file photo. Lack of running water is just one of the many infrastructure problems on tribal lands, officials told a House panel Wednesday. (File photo by Devon Cordell/Cronkite News)

WASHINGTON – Tribes face a digital divide “as big as the Grand Canyon” and a “not even quantifiable” lack of utility access, just two of the problems outlined at a House hearing Wednesday on infrastructure needs in Indian Country.

Witnesses at the House Natural Resources subcommittee hearing cited statistics that depict a bleak picture of infrastructure on reservations, including water and electricity, and said that even those numbers were likely overly optimistic.

They urged the largely sympathetic subcommittee members to ensure that Native Americans are not left behind again in funding under the American Jobs Plan, the Biden administration’s $2.2 trillion infrastructure proposal.

“It’s time for America to support the Navajo Nation and all Indigenous communities and invest in utility infrastructure,” said Walter Haase, general manager of the Navajo Tribal Utility Authority.

The American Jobs Plan, unveiled last month by President Joe Biden, would allocate massive amounts of federal funding to traditional infrastructure projects like roads, bridges, water systems, transit and utilities. But it would also include funding for clean energy projects, for community and home-based caregivers and for home and office energy renovations.

The plan would be funded with increases in corporate taxes that the White House said will raise more than $2 trillion over the next 15 years, allowing the plan to be paid off. But that plan has drawn stiff opposition from Republicans, who have said that while the government needs to invest in infrastructure, the Biden plan goes too far and taxes too much.

It includes $10 billion for improvements to rural and tribal water systems, and a pledge to reach 100% high-speed broadband coverage across the U.S. It also promises dedicated funding for tribal areas to support water, transit, housing and other projects, although no dollar figure was given for those areas.

She cited a 2019 AIPI assessment that found 18% of homes in tribal areas have no internet access and 33% said they rely on cell phones for access to the web. The report found that 25% of households on reservations do not even have landlines. 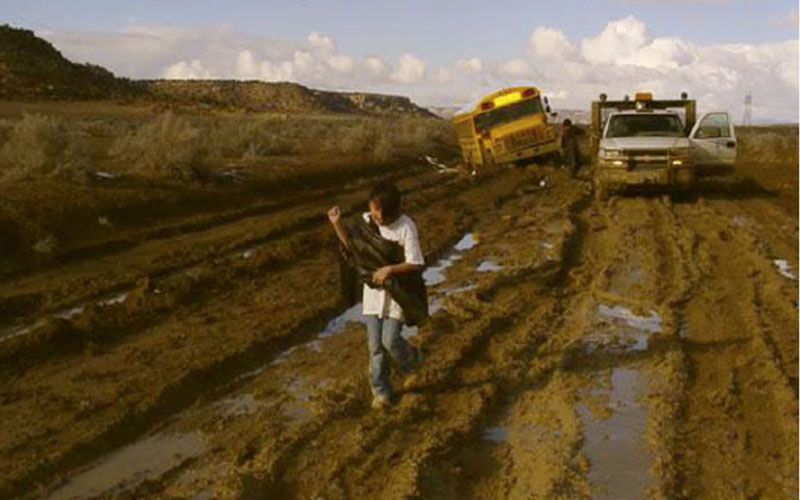 Roads are another problem on tribal lands. In this file photo, a Navajo student walks away from a school bus that was stuck in the mud on an unpaved road. (Photo courtesy San Juan County, Utah, Roads Department)

She said it would take an estimated $8 billion to “begin closing the digital divide in Indian Country.”

Haase said the COVID-19 pandemic has “shone a bright light” on the infrastructure needs of tribal lands, citing several examples where better infrastructure would have saved lives. And it’s not just the coronavirus, he said.

Besides not having easy access to safe drinking water, he said many family members live farther apart on tribal land, which means access to basic phone service is vital to keeping them connected in times of emergency.

Haase said the federal government has not done its part in developing needed infrastructure on tribal lands.

“The federal government has a fiduciary trust responsibility to federally recognized Indian tribes to ensure that its citizens living on reservations have the basic necessities of life,” he said.

That was echoed by Morris, who said improving tribal broadband access is part of the “unique responsibility the federal government has with tribal governments.”

Haase acknowledged the complexity of approaching infrastructure projects, both administratively and physically, but said it must be done.