PHOENIX – When Jocelyn Erickson suffered a torn anterior cruciate ligament and damaged meniscus cartilage in her knee while playing basketball in January, there was reason to wonder about the athletic future of the Oklahoma softball commit.

However, the two-sport star at Sandra Day O’Connor High School in Phoenix has used the setback as an opportunity, learning more about what it takes to be a true teammate and leader while working to overcome the devastating injury.

After the 2020 high school softball season was cut short due to COVID-19, Erickson was excited to get back to playing the sports she loves, softball and basketball.

“She doesn’t even need basketball,” said Sandra Day O’Connor girls basketball coach Danny Soliman. “She’s just a winner and she loves to compete. Softball is like their business and passion, but this (basketball) is their joy, and they get to challenge themselves.

“I think for softball it came easy to her, but on the court, she had to learn and grow.”

Softball at the collegiate level has always appeared to be a given for Erickson, a high school junior who committed to Oklahoma as an eighth-grader. But even with her college status secured, Erickson still chose to play basketball at the high school level.

Her excitement to return to competition after the pandemic didn’t last long. Erickson suffered the knee injury in just the second game of the basketball season.

As she tried to cross over a defender, Erickson’s knee gave out. The diagnosis: a torn ACL and meniscus. Not only was her basketball season over, but her softball season had ended before it even began.

But while she hasn’t been able to suit up and take the field, Erickson has remained active with each team, taking on coaching and leadership roles.

“I think it just shows the kid she is, the character she (has),” Soliman said.

Sandra Day O’Connor softball coach Melissa Hobson called Erickson a “fireball” and said the rest of the Eagles have rallied around her. 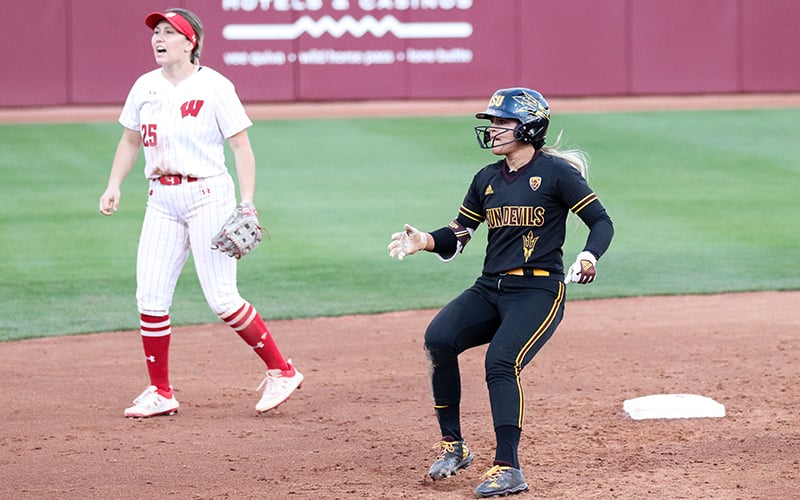 Erickson, a catcher, said she sometimes calls pitches from the dugout and will take charge in team huddles.

“I just try to help the team in any way I can,” Erickson said.

Not only is Erickson making an impact on her high school teammates, she is helping coach younger girls at softball camps and has discovered she might have a knack for it.

“I didn’t really think I’d like it, but I really like seeing how girls develop, and I think I will definitely be coaching in the future,” Erickson said.

For Erickson, the youngest of five children, sports have always played a significant role. Each of her four older siblings played sports, so competition was a natural part of her childhood.

Her brother played baseball, football and basketball and went on to play baseball at Brigham Young. Two of her older sisters are currently playing softball at BYU. All four of her siblings also attended Sandra Day O’Connor.

“It’ll be a sad day when the last Erickson graduates,” Hobson said.

While dual-sport athletes like Erickson are not uncommon in high school, few excel at the level that she has in two sports.

Soliman can only recall one other athlete who excelled at that level for the Eagles: Grace Lyons who is now a junior on Oklahoma’s softball team. Like Erickson, Lyons played basketball and softball for the Eagles.

After catching the attention of college recruiters at an early age, Erickson is following the path to Norman, Oklahoma that Lyons paved years before. Erickson committed to the Sooners’ softball program as an eight-grade prodigy, choosing OU over offers from multiple Pac-12 schools.

She is currently on the road to recovery from the knee injury and hoping to make a quick return to competition. She is aiming to hit and run by the end of April and wants to be back at full strength by the end of June, a six-month recovery timeline.

“Obviously I don’t want to come back too early and risk tearing it (again), but I am definitely on the right track,” Erickson said.

By the time Jocelyn takes the high school softball field again as a senior in 2022, it will have been almost two full seasons since she has been able to suit up and get behind the plate in high school competition.

And as she continues her rehab, she is keeping a positive mindset, ready for her next challenge.