His teammates may not want him to leave, but Arizona State’s Jaelen House, left, has entered the NCAA’s transfer portal. Changes to the association’s transfer policies could be coming soon. (Photo by Alina Nelson/Cronkite News)

PHOENIX – No college athletics program is immune to the tumultuous nature of the transfer portal – the NCAA’s database of players interested in a new school.

But few programs have been impacted by it this offseason more than Arizona State men’s basketball team.

“He said he ‘needs to do a better job of identifying the players that he wants to go to war with,’” Gardner said. “I think that was a veiled reference to the fact that the team chemistry this year was never quite right. I think everybody could see that.”

The portal is a database of every college athlete who is interested in transferring. Once a player adds their name, schools can reach out, unless “do not contact” is added to the entry. A player can also withdraw from the portal at any time. It is a way for players and coaches to see who is available. These lists were previously private.

And more changes are afoot. The NCAA Division I Council met this week and passed a rule that would allow players to transfer once and be immediately able to play, barring academic ineligibility. Previously, players had to sit out a year of competition.

In Hurley’s tenure, there have been at least 16 players come in via transfer, four of whom would go on to transfer out the following year. Including the players who began their college careers as Sun Devils and transferred out, the total of Sun Devils to transfer out during the Hurley era stands at eight.

Cherry had been away from the team since mid-December for what was described as personal reasons. At the time of his commitment to ASU out of high school, he was the second-highest rated high school recruit in program history. Cherry’s choice to remain in the Valley by transferring to GCU might have been influenced by his younger brother, Jeremiah, still being in high school locally. The younger Cherry is playing at St. Mary’s Catholic High in Phoenix. The Knights won the 2020-21 4A state championship last month.

This will be Osten’s second time transferring. He joined ASU from Lee College, a Houston-area community college. His rise from junior varsity player there to starter at a Division I, Power 5 school often was a topic on ASU broadcasts. At NIU, he’ll be coached by former ASU assistant coach Rashon Burno, who took the head coaching job in DeKalb in March.

The former Shadow Mountain High standout House became one of ASU’s most efficient players in his second season, shooting just under 39% from the floor and 40% from 3-point range in a reserve role. He averaged under six points per game in nearly 19 minutes off the bench. The son of former ASU star Eddie House is charismatic and enthusiastic, often celebrating after forcing one of his team-high 1.6 steals per game. Gardner said House might have been rankled by being labeled as just a good defensive player.

“There was one question that was asked of him in the postseason … but he kind of almost sounded offended that people were referring to him as a defensive specialist,” she said. “He was like ‘I was a good shooter, too.’”

Gardner said that response from House was “maybe an indication that he wants to be more of an offensive threat” than Hurley had asked him to be. House had the best defensive rating (102.9), best defensive win shares (3.8), and the second-highest percentage of turnovers forced on the team (19.2%), according to College Basketball Reference.

Senior Holland Woods, junior Kyle Feit , freshman Pavlo Dziuba are the other Sun Devils who entered the portal but remain in limbo.

Woods is the latest Sun Devil to depart. He said on Instagram that playing for his favorite team growing up “was an absolute dream come true,” and the decision to leave “was not made lightly and it breaks my heart to be leaving Tempe.” Woods, a Phoenix native and Apollo High graduate, spent the first three years of his college career at Portland State, where he became one of the program’s all-time greats. He’s the school’s leader in assists leader (521) and steals (165) and is fifth in points (1,387). In his lone season at ASU, he was the only Sun Devil to play in every game, earning 12 starts.

Feit entered the portal for the second time in his college career after playing sparingly this past season. He announced in March 2020 that he planned to transfer but ultimately rejoined the Sun Devils after putting his name in the portal.

The walk-on, who ASU basketball broadcaster Tim Healy once called “One of the most talented non-scholarship players I’ve seen at ASU” was one of four players to enter the portal in 2020. Khalid Thomas, Andre Allen and Romello White eventually signed with other programs.

This month, freshman Pavlo Dziuba added his name in the portal, rounding out the exodus of ASU underclassmen. The freshman from Ukraine played sparingly in his first year of college basketball, one where he was the youngest player in Division I at 17 years-old.

Gardner believes this year’s group of departures is directly related to the disappointment of ASU’s losing season.

“I think that ASU just kind of was missing that chemistry,” she said. “And granted, when you’ve got stops and starts (because of COVID-19 outbreaks) and injuries, it’s hard to kind of develop that over the course of a season like they had.” 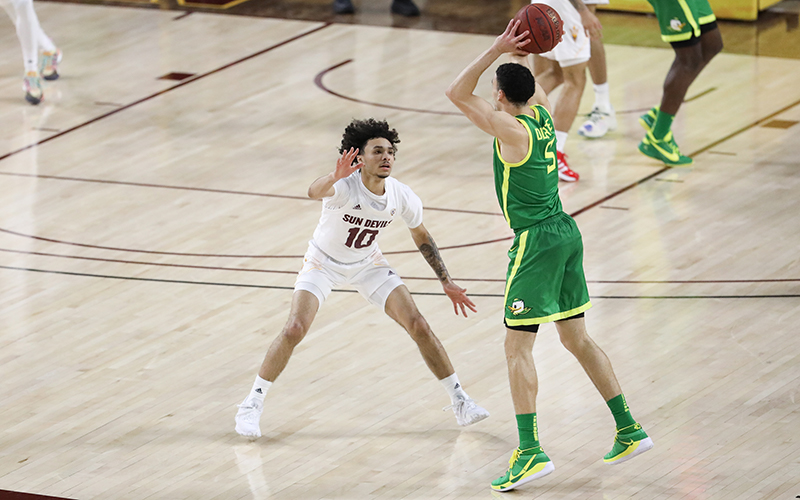 The departures of Cherry, Osten and Woods makes room for A.J. Bramah from Robert Morris, Jay Heath out of Boston College and Toledo’s Marreon Jackson at ASU.

Bramah spent two years at RMU after arriving as a top-50 community college prospect out of Sheridan College in Wyoming. ASU recruits Allen, Thomas and Alonzo Verge were all above Bramah in the top-fifty JUCO rankings at the time. The 6-foot-7 forward was the Colonials leading scorer and rebounder in his first season, earning all-conference honors. He upped his points, rebounds, assists and steals marks by the end of his second year.

Nubyjas Wilborn, who covers RMU for the Pittsburgh Post-Gazette, says Bramah’s growth into a dynamic, three-level scorer will improve the Sun Devils, no matter what role he is given.

“It’s a little bit rare for big men nowadays, or becoming more of a thing, where if you put them 4-feet in front of the basket, he’s going to dunk on your head,” Wilborn said. “Or he can go back-to-basket and the old-school traditional post game if you want that. If you want him to face up, he can take you off the dribble. If you want him to step back, he can do that, too.”

The trend of picking up transfers makes sense to Wilborn, especially for programs in a win-now stage, like ASU.

“A lot of these schools, if you’ve got to win now, do you want a high school freshman or do you want A.J. Brahma?” he said. “I’m telling you who I’m picking. I’m picking that bull.”

As for Heath, Gardner likes that he’s a proven commodity, having played in a major conference.

“I like the addition of Heath just because he’s a Boston College guy, so he’s played in the [Atlantic Coast Conference], proven conference; so he’s played against good competition.”

Heath earned every second of his time on the floor this season for BC. The team was hit with two COVID-19 outbreaks that forced the eventual cancellation of nine games. The guard is a volume shooter, averaging more than 20 shots from the field and 13.6 points per game.

A.J. Black covered Heath during his time in Chestnut Hill for Sports Illustrated’s BC Bulletin. He said Heath’s offensive skills will fit well in Hurley’s system; it’s his defense that will need improvement.

“If he can get some technique and be in a system that really stresses defense, it’ll push him to take that next step” he said. “I think that’s where ASU would be a really good fit for him.”

Heath went through a difficult season with the Eagles, and the wear was noticeable, Black said.

“The big issue with Heath is the other end of the floor as a defender,” he said. “At times (he) just didn’t put a lot of effort into it. To his credit, it wasn’t just him, it was the whole team; you could see in body language when the team started to struggle. It was something that was really challenging for him, too.”

Last week, Jackson, who was player of the year in the Mid-American Conference for Toledo, announced his commitment to ASU on social media, tweeting it is “Time to tap into a whole other level.”

The Rockets won the MAC regular season title but were upset in the first round of their conference tournament, which knocked them out of NCAA Tournament consideration.

The sour finish didn’t detract from Jackson’s stellar season. He averaged over 18 points per game on better than 40% shooting from the floor. The Cleveland native is both a shot-making and shot-creating prospect – he scored or assisted on 355 of his team’s shots this season. His 90% free throw-shooting mark was good for 12th in the country in 2020-21, and should improve an area of concern for the Sun Devils. ASU shot under 70% from the line nine times last season.

Kyle Rowland, who covered Jackson for the Toledo Blade, said Jackson’s choice to transfer after four years at Toledo isn’t an example of a player “running from something, but running to something.”

Jackson tested the NBA Draft waters at the end of last season, and playing a year in the Pac-12 could improve his profile with profile NBA evaluators.

“This is a guy who has a free year because of the pandemic, and is kind of on the cusp of maybe getting a shot in the NBA,” Rowland said. “He needs to play at a Power 5-level program and show scouts that he has the game that can translate to the NBA and not just put up numbers in the MAC.”

Jackson’s impact on the program will include a team-oriented leadership that doesn’t necessarily include being the proverbial “alpha.” Rowland said that has to do with a natural curiosity.

“The guy’s got an unbelievable work ethic,” he said. “I think he’ll immediately get in there and say, ‘Hey, we need to get in the gym and we need to figure each other out and how all our pieces fit together.’”

With the NCAA’s implementation of the transfer portal ahead of the 2018-19 season, men’s college basketball and football offseasons have become a revolving door, of sorts, with coaches and players courting each other there.

Teams aren’t building their roster from solely high school recruiting anymore, nor are they losing players to only professional drafts.

“I think we all knew that the transfer portal was going to go nuts this year,” Gardner said. “It was going to be basketball free agency at its best.”

Even with three of the six outgoing players committed to new schools, and a trio of upperclassmen set to join the team, she suggests ASU’s off-season is far from over.

“I think that there are going to be a couple more players added to the mix,” she said. “What position they might be at? It’s still hard to tell. I don’t think they’re by any sense done.”