Issues with concession stands and social distancing plagued much of the National League West during home openers. The Los Angeles Dodgers issued a statement apologizing for the inconveniences. (Photo via Eric Lara Twitter account) 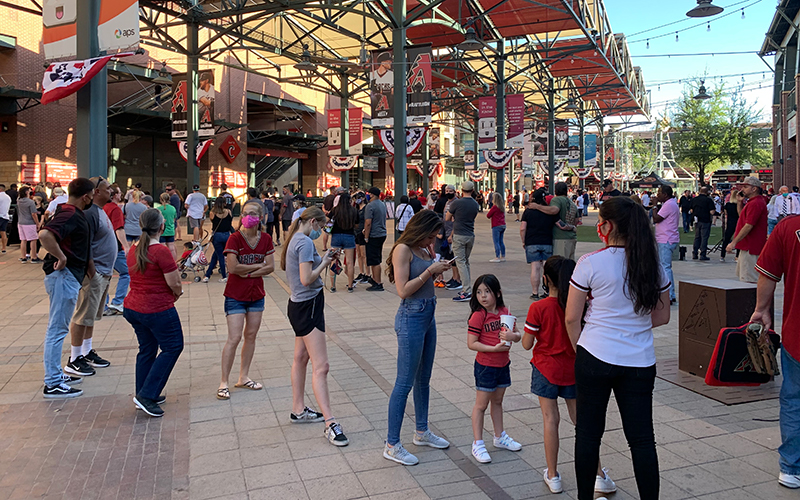 Arizona Diamondbacks fans waited in lines outside Chase Field before Friday’s home opener. Most of the concerns fans had came inside as they tried to secure food and drink. (Photo by Cronkite News)

The Arizona Diamondbacks and Chase Field opened their gates for the first time in over a year this past weekend for their home opening series against the Cincinnati Reds. While fans were excited to finally attend a live sporting event, ordering food and drinks and waiting in lines was a challenge.

Many Diamondbacks fans complained on social media about long wait times and technical difficulties ordering food via their mobile device because of the Diamondbacks’ new contactless and cashless policy.

“Maddening,” said Justin Sandberg, 36, who was visiting from California. “I’m a patient man but I missed two innings of baseball waiting in line.”

Fans were encouraged to order their food and beverage using the MLB Ballpark app, the league’s official mobile companion app for attending games, instead of traditional walk-up ordering at the register. But some fans said they waited between 30 minutes to two hours for food they ordered, causing them to miss two to three innings of action.

@Dbacks The lines are atrocious. Open everything up!! Wish I could watch the game in my seat. Waiting over an hour for food.

Good to see the @Dbacks trying to make this right. This was the single worst ballpark experience I’ve ever seen in my entire life. It was comically bad. The concessions at 204: Zero staff training, wrong orders, endless lines, down computers, no soap in the bathrooms… https://t.co/ujcRo9h9rH

Diamondbacks President and CEO Derrick Hall recognized the problems and released a statement on Twitter after the snafu.

“We pride ourselves in providing the best fan experience in sports, and last night we regrettably came up short due to concessions inefficiencies that resulted in long lines and transactional difficulties,” Hall said. “We apologize for any inconveniences and the negative impact it had on our fans’ enjoyment. The issues are correctable and will be addressed and remedied immediately so as not to be repeated.”

Hall followed up on his initial apology with a statement promising to compensate for those affected who attended the home opener.

“We appreciate all fans who attended our game last night and realize many experienced inconveniences and we have begun to address and make corrections,” Hall said. “We have decided that in the coming days, all single-game ticket buyers will receive information regarding a free ticket to an upcoming game as a token of our appreciation and we’re determining a meaningful offer for our dedicated Season Ticket holders who already have tickets.

“We are grateful for the continued support of our fans and are committed to immediate improvements.”

The Dodgers also released a statement apologizing for the inconvenience.

“The Dodgers became aware of several issues with mobile ordering at concession stands early in today’s game and quickly disabled the system and switched to traditional walk-up ordering,” the statement said. “After consultation and cooperation with the Los Angeles County Department of Public Health, Dodger Stadium will continue with walk-up ordering, as in past seasons, with social distancing and all healthy and safety guidelines enforced.

Like the Diamondbacks, the Giants also held their home opening series this past weekend and fans dealt with similar issues.

The MLB Ballpark app could not function properly due to high demand from hundreds of fans trying to order at the same time, leaving them hungry and thirsty.

Notes about my first pandemic game at Oracle – getting in was easy, ppl are spaced out, but concessions has been disappointing. Every place has said “ordering paused due to high demand” most of the game. When we did get an order in though, it was ready quick. @kron4news #SFGiants pic.twitter.com/COgusLN5y3

In addition, the Giants have had to limit the amount of food items offered in order to accommodate other needs.

In a Twitter response, the team said, “All food orders are mobile, and to …. maximize the fan experience, we had to limit the food options for the time being. We hope to expand the food menu in the future.”

While MLB and teams continue to welcome fans back into their stadiums, it is likely to take some additional time for concession stands to seamlessly integrate a contactless and cashless process without any further complications.