WASHINGTON – President Joe Biden nominated Tucson Police Chief Chris Magnus on Monday to be head of Customs and Border Protection, tapping a progressive outsider to oversee an agency facing surging numbers of migrants at the border.

In making the announcement, the White House cited Magnus’ history of promoting community relations and police accountability, as well as his experience as police chief in a city near the border.

“In Tucson, Magnus implemented de-escalation training, sentinel event review processes, and programs to promote officer health and wellness,” the White House announcement said. “Because of Tucson’s proximity to the border, he has extensive experience in addressing immigration issues.”

In a 2017 editorial for the New York Times, Magnus wrote that the Trump administration’s threat to withhold police funding from “sanctuary cities,” which limit cooperation of local police with federal authorities, would end up raising the crime rates in those cities. He also said the “anti-immigrant rhetoric” of the Trump administration had made Latinos less likely to cooperate with police in Tucson – which is not a sanctuary city.

Magnus’ position was not lost on Rep. Andy Biggs, R-Gilbert, who criticized the nomination Monday. 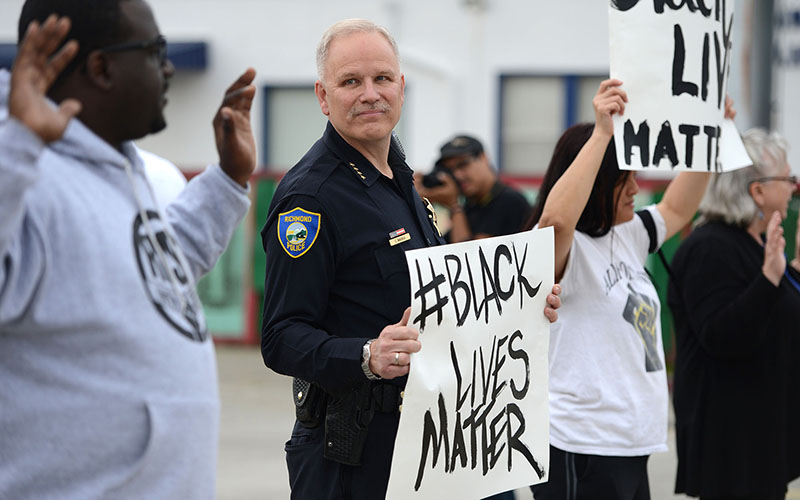 Tucson Police Chief Chris Magnus shown at a Black Lives Matter rally in 2014, when he was chief of the Richmond, Calif., police department. Magnus, a progressive with no federal law enforcement experience, was nominated to be the next head of Customs and Border Protection. (Photo by Kristopher Skinner/MediaNews Group/The Mercury News via Getty Images)

“We are a nation of law and order,” Biggs said in a tweet that cited Magnus’ support for sanctuary cities. “We need leaders who support the rule of law, not oppose it.”

But most of the reaction to Magnus’ nomination was positive.

Tucson Mayor Regina Romero said Magnus “has always understood the importance of distinguishing the role of local law enforcement from federal immigration enforcement and how critical this is to protecting community trust.” She said he has also gained “valuable experience” as a chief near the border.

Sen. Kyrsten Sinema, D-Arizona, called the nomination “a positive step toward ensuring the administration understands and addresses the needs of Arizona communities.” Her statement said she looks forward to talking with Magnus about the nomination, which still must be approved by the Senate.

Magnus was one of six people nominated Monday to Homeland Security posts, including Ur Jaddou, who was nominated to be director of Citizenship and Immigration Services. Jaddou most recently ran DHS Watch, which the White House said “shined a light on immigration policies … that failed to adhere to basic principles of good governance, transparency and accountability.”

Because immigration is a political flash point, nominees to immigration posts can expect to be grilled in their Senate confirmation hearings, said Michelle Mittelstadt, a spokesperson at the Migration Policy Institute. But she said the current nominees’ “good track records” may ease the process.

“There is nothing noncontroversial about positions with immigration,” Mittelstadt said, noting that a number of positions in the Trump administration were only ever filled with temporary appointees.

The nominations come as apprehensions at the southern border have surged to their highest levels in years. Republicans have seized on the situation, which they attribute to the administration’s reversal of Trump-era policies, and have branded it “Biden’s border crisis.”

The White House has responded with a program to discourage migrants from leaving their home countries to come to the U.S.

That includes repeated messaging in Mexico and the Northern Triangle countries of Central America – El Salvador, Guatemala and Honduras – that the border is not open and that the majority of migrants stopped at the border are being turned back. It also includes a plan to direct aid to improve the economic and safety situations in those countries to give people less incentive to leave.

But the administration continues to struggle with a sharp increase in the number of unaccompanied minors – who are not turned back – who have shown up at the border in recent months. They have swamped holding facilities and forced the government to build new shelters and house some in hotels while they are being processed.

Despite the challenges, Magnus expressed pride and appreciation for his nomination, saying in a statement Monday that he was “very honored to be nominated by the President to lead Customs and Border Protection.”

“I look forward to speaking with senators and hearing their thoughts and concerns,” said Magnus, who added that in the meantime he would “remain committed to serving” as Tucson police chief.