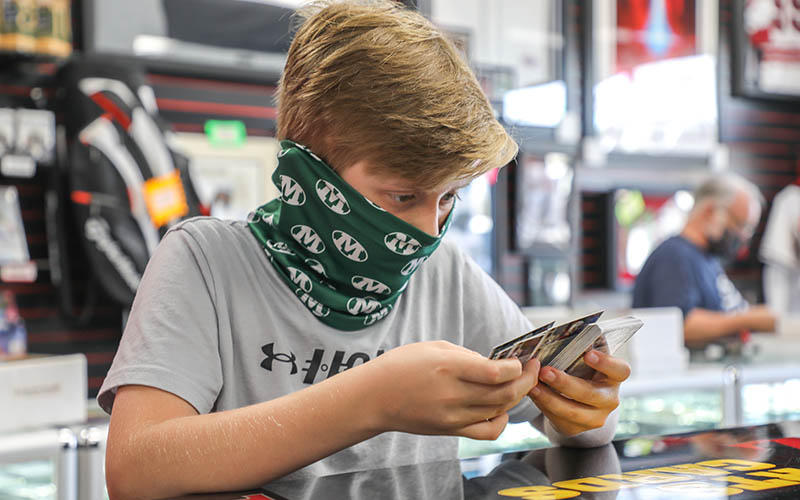 Danny Grasha, of Medina, Ohio, combs through packets of hockey trading cards looking for “young guns” at AZ Sports Cards in Phoenix. Searching for cards is something he can do during the COVID-19 era but asking players for autographs isn’t. (Photo by Alina Nelson/Cronkite News) 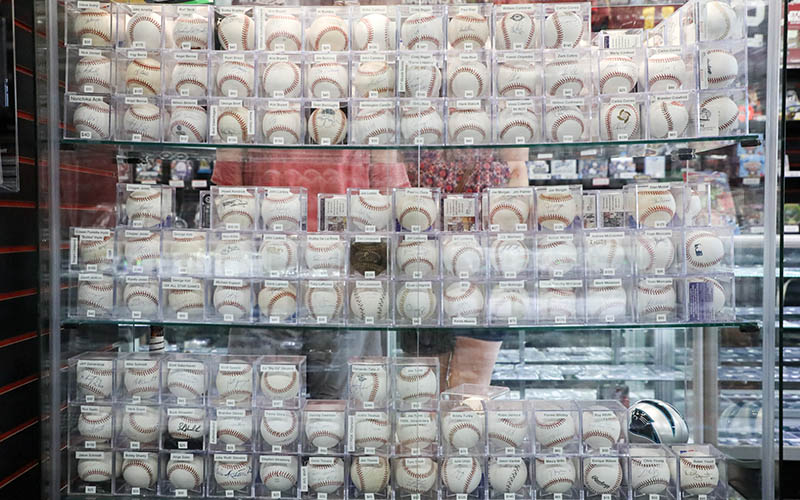 Rows of autographed baseballs are stacked in a display case at AZ Sports Cards. (Photo by Alina Nelson/Cronkite News)

PHOENIX – For some sports fans, the interaction with an athlete during an autograph session is the best feeling in the world. Unfortunately, COVID-19 has taken some of the excitement out of autograph seeking.

Before the pandemic, fans hoping to get an autograph from a favorite player could show up before games, especially during spring training around the Phoenix area, and head down to the first few rows of stands. Players would spend time signing baseballs, gloves, hats and cards.

Whether it was a young kid seeking an autograph of his favorite star for sentimental value or professional memorabilia collectors trying to get multiple items signed for resale and profit, autographs were easily accessible.

Athletes these days are required to keep their distance from fans, who aren’t subject to regular COVID-19 testing like players. It means players can’t make the day of a young fan by signing an item and perhaps exchanging a few words with them.

Signing autographs is off limits for players in most sports, and it was especially evident at Cactus League baseball games around the Phoenix area. Getting autographs at spring training is a rite of passage for many young fans.

Colorado Rockies relief pitcher Ben Bowden feels for the kids in the stands he has to turn down.

“Some kid came up and asked for an autograph,” Bowden said. “And I said, ‘Hey, sorry buddy we’re not allowed to.’ The look on his face, (I) was not happy that I had to say that to him because I remember what it was like being little and wanting an autograph. So I know that kind of stung him a little bit.

“And it kind of stung me, too. So, I would like to be able to do that. This whole COVID deal has been rough on everybody, and we’re all kind of learning on the fly, trying to do things the right way.” 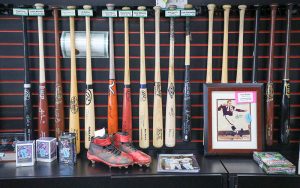 Autograph signing events were also popular before COVID-19. An autograph seeker could buy a ticket to the events, meet an athlete there and an item signed, then pose for a photo with the athlete.

The pandemic has put a stop to that.

“A person would get to meet this legend, would get to meet Larry in-person and get his autograph on the item that they choose,” Thalblum said. “And they also get their picture taken with him. And you have about a 30-second time there where they’re actually standing right next to Larry Fitzgerald, who’s sitting at a table.

“That 30 seconds, for some people, it’s priceless.”

Like a lot of things in life over the last year, the pandemic COVID-19 changed autograph collecting. The vast majority of signing events that Free Agent Sports holds are now simply business transactions. There are no personal interactions between collectors and athletes.

“That all came to a screeching halt,” Thalblum said. “Now, the people who wanted Larry’s autograph, they had to drop off their items in my store, and I then got the items autographed, taking pictures of the signing and making sure people got the same item back.”

Now, Thalblum sets up for business at a farmers market on Saturday mornings.

“We’ve covered our budget. We’re not paying a large sum for rent at the mall (anymore). We don’t need to be at the mall every day.”

While autograph seeking has become more difficult thanks to the pandemic, the business of collecting has never been better.

At AZ Sports Cards in Phoenix, the pandemic has actually affected business in a positive way as sports enthusiasts with time on their hands have dug into closets or pulled shoeboxes out from under the bed to revisit long-forgotten collections.

“The entire sports memorabilia market has essentially been on fire for the last year and a half and that includes the autograph market,” said Don Drooker, a consultant and buyer for AZ Sports Cards. “My take on it is that it all comes down to, people have had time they haven’t had in the past.

“And they’re going back and looking at things that they didn’t have an opportunity to look at, recently. In a lot of cases, it’s things that belong to family members and nobody has had the time to go back and go through it.

“And now with the pandemic and everybody being home over the last year, people are … going through their closets or everywhere else, finding things that they’ve either forgotten about or they wanted to revisit.”

Goldman believes the market is seeing an uptick in activity due to people having more time on their hands to surf the internet for autographed items. He also believes stimulus checks, issued by the government as a form of COVID-19 relief, have been used to purchase autographs. 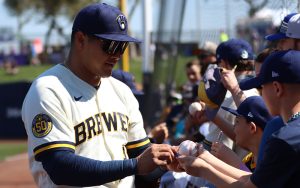 Spring training was one of the ways fans could interact with players, as Milwaukee Brewers outfielder Avisail Garcia is doing at American Family Fields of Phoenix. Players now have to say “no” to autograph seekers. (File photo by Reno Del Toro/Cronkite News)

“People are getting these stimulus checks and they’re starting memorabilia collections,” Goldman said. “Or they’re getting on TikTok and trying to become an influencer. Pick your poison. Whichever one you want to do. Something’s going to happen. You’re going to spend that stimulus check money.”

Even with the autograph market booming during the pandemic, autograph seeking in the old way is largely non-existent.

This year, however, the store did not see its usual influx of fans.

“We sell baseballs for people to take to the ballpark and get autographed,” Drooker said. “People would come under normal circumstances … buying them by the case, like 24 at a time. And they’re heading to the ballpark or the backfields to get them all signed. That’s a big part of our business in February and March. It doesn’t impact our business dramatically. It’s just different from other years.”