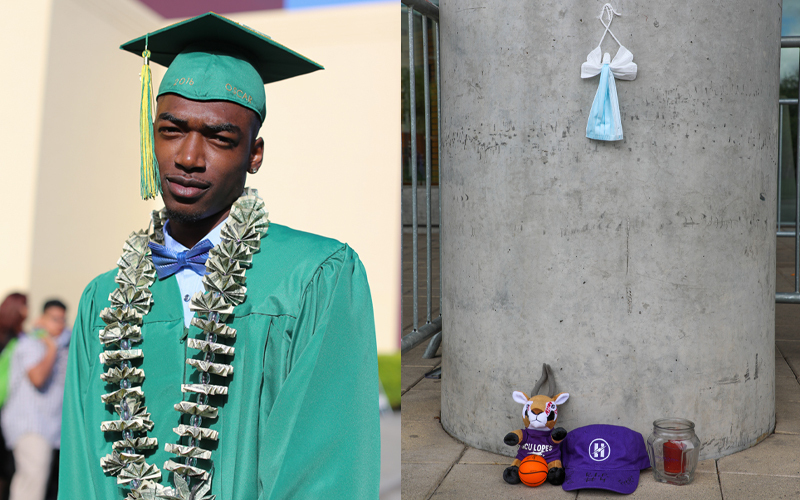 Left: Oscar Frayer, shown at his high school graduation, was preparing to graduate in April from Grand Canyon University before a car accident took the popular basketball player’s life. (Photo courtesy Frank Knight) Right: A makeshift memorial is set up in front of the arena at the university. (Photo by Alina Nelson/Cronkite News) 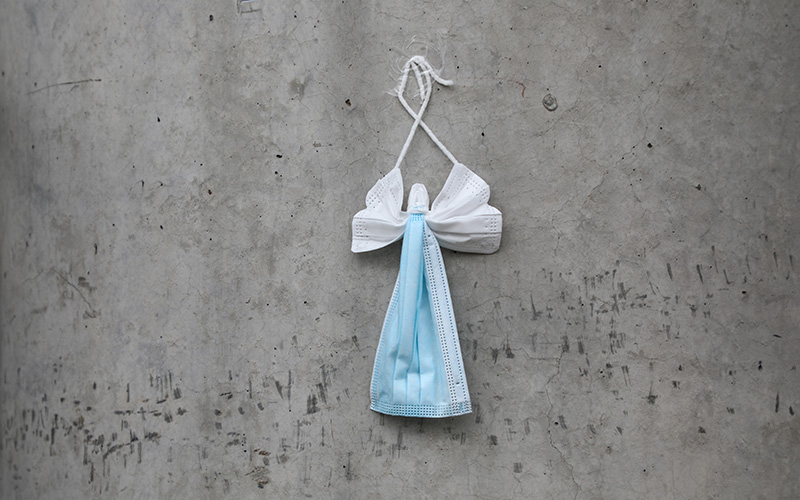 A guardian angel made out of disposable masks is taped to a pillar outside of Grand Canyon University Arena in memory of Oscar Frayer. (Photo by Alina Nelson/Cronkite News) 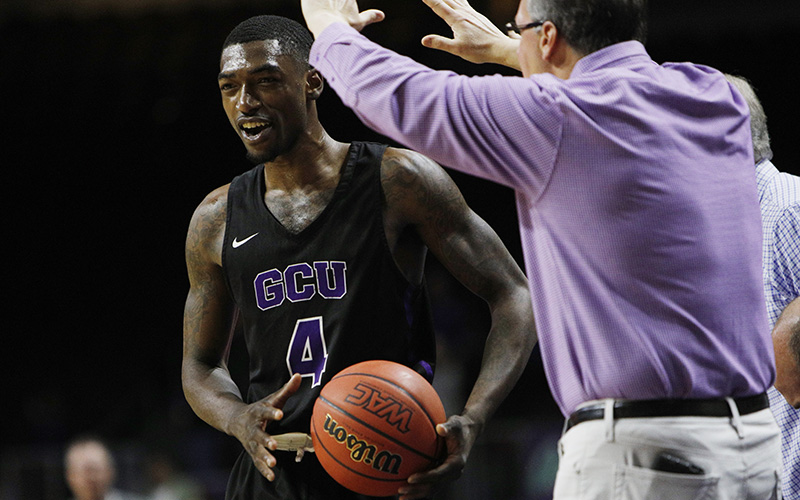 Oscar Frayer was known for his smile. “We love O. He was the heartbeat of our team with his vibrant, energetic personality,” GCU coach Bryce Drew says. (Photo by Joe Buglewicz/Getty Images)

PHOENIX – It started out as a chance encounter. It ended as a special moment for a young boy.

Friends remember him for his energy, smile and generosity, like the time he ran into a mother and son at a grocery store. The woman recently shared the story with Frank Knight, Frayer’s coach at Moreau Catholic High School in Hayward, California.

“The mom said Oscar stopped everything he was doing and spent like 20 minutes with this kid in the store,” Knight said. “She wanted to let me know that Oscar did that and it really stood out to her, that he made her son feel special in the middle of Safeway one day. That’s just the kind of guy he was.”

Frayer, 23, had just finished his senior season at GCU and was set to walk at commencement in April after graduating with a degree in communications.

The crash occurred around 2:30 a.m. PDT on Tuesday, when the Subaru Frayer was in rear-ended a California Highway Patrol vehicle pulled off to the side of Interstate-5 South. The CHP vehicle was assisting a big rig that had stalled, according to the state patrol. The two officers that were in the CHP vehicle are expected to survive, ABC 10 in Sacramento reported.

It was another tragedy to strike the family. Frayer’s father Oscar, who suffered from sleep apnea, died in a car crash after falling asleep at the wheel, according to an article on GCU’s website. Frayer was 7 at the time.

Oscar Frayer and his sister, Andrea Moore, were close, friends say. A GoFundMe account has been set up in their names. (Photo courtesy Frank Knight)

On Thursday night, Knight set up a GoFundMe account for the Frayer family. It has raised over $72,000 as of early Friday afternoon.

What stood out to Knight from a young age was Frayer’s presence, which always gave off a positive energy.

“A young lady who went to school with him at Moreau gave $10 and just said, ‘Every time I saw Oscar in the hall, I wasn’t friends with him, but every time I saw him in the hallway he smiled at me and said hey,’” Knight said.

Frayer worked Knight’s summer basketball camps throughout high school, and even after he graduated wanted to continue coming back.

After high school, Frayer went on to become one of the most accomplished players in GCU history, appearing in 121 games over four seasons with the Lopes, scoring 970 points. He set the school’s Division I record (since 2013) with 93 blocks and finished second in program history in steals.

Much like he did at Moreau, Frayer made an impact on people from the moment he arrived at GCU’s campus.

“He does leave a legacy of love. He received love because he gave a lot of love to people and I think that’s the biggest thing that I’ll remember,” said Louis Wilson, head coach at the University of Texas at Tyler and former GCU associate head coach. “I will literally never forget his smile.”

Wilson was an assistant coach for the Lopes during the 2018-19 season. After that season, Frayer ran into some academic issues, making him ineligible for the 2019-20 season. The way Frayer bounced back, Wilson said, should be an example for others about how to get back up when you’ve fallen down.

“What I’ll always remember is that he persisted,” Wilson said. “And that even though he had to sit that year out, he found a way not only to become eligible to play basketball, but to fulfill his destiny academically and get his degree.

Wilson, Knight and others also remember his down-to-earth personality, calling his coaches “OG.”

Tributes poured in across social media from Frayer’s teammates and coaches, including first-year coach Bryce Drew.

“We love O. He was the heartbeat of our team with his vibrant, energetic personality,” Drew said in a university release. “I cannot put into words the hurt and sadness we all feel, but we know he is in heaven and that gives us great joy to know we will be together again.”

Drew also wrote a longer message on Twitter to Frayer that included, “O. You had an unbelievable ability to light up a whole gym with your smile. I am so thankful I was able to coach you and spend this year with you.”

The NCAA said in a statement that it joins “the Grand Canyon University community in mourning the tragic loss of Oscar Frayer. While still a young man, he had already accomplished so much and was a light to many. Sports fans everywhere were fortunate to watch him play the game he loved during the men’s tournament this year. Our thoughts are with his family, teammates and friends during this difficult time.

GCU’s spring commencement ceremonies are set to take place on April 19 and 20, and Frayer was set to walk and accept his degree. Instead, Knight said, Frayer’s mother will accept his degree on his behalf.

GCU will hold a memorial of life to honor Frayer and other members of the GCU community who have lost their life during the last academic year on Tuesday.

I bleed purple FOREVER!!!! THANK YOU LOPE NATION for the last 5 years..it’s been nothing less than amazing..from President Mueller, to our coaching staff, to my brothers who I compete with everyday..it’s love FOREVER. 4 Gone🤘🏿💜