Jaelen House’s decision to enter the transfer portal was a blow for an Arizona State men’s basketball that already was losing a collection of talented players. (Photo by Alina Nelson/Cronkite News)

TEMPE – When senior Remy Martin reluctantly exited Arizona State’s blowout loss to the top-seeded Oregon Ducks in the second round of the Pac-12 Tournament, it was expected to be the last time he’ll leave a court wearing a Sun Devils uniform.

And junior Taeshon Cherry predictably entered the transfer portal after playing in only seven games, then leaving the team for personal reasons.

But one unexpected departure could have significant ramifications for the Sun Devil program in the post-Martin era.

Jaelen House, a local product out of Shadow Mountain High School in Phoenix and perhaps the most dynamic of the team’s underclassmen, entered the transfer portal just a day after Cherry.

On the court, House brought a spark to the Sun Devils not with his offense like his father, Sun Devil basketball legend Eddie House, but on the defensive end of the floor. No matter the score or the situation, House’s constant energy and spirit permeated the ASU roster.

“He has a motor and to get that out of him, you would have to rip out his heart,” Verge said. “He does everything that other people don’t want to do. Those are the types of people you need on your team … Jaelen House is one of those guys that you can put on any team and he’ll flourish.”

Hurley and his staff wasted little time beginning the rebuilding process, landing Canadian center Enoch Boakye, the fourth-best center prospect and 32nd overall prospect in the 2022 class according to 247 Sports Composite rankings. He will reclassify to the 2021 class and play for ASU this fall.

The loss of House will be felt. With the uncertainty and interruptions of an ASU season that included three game cancellations due to COVID-19, his energetic spirit was necessary to keep his teammates engaged and ready through it all.

“Every day, we had to get COVID testing and every day there was something, or we might not have games that week,” House said. “It was very hard for us to stay engaged. I feel like I gave us a little jump with my defense.” 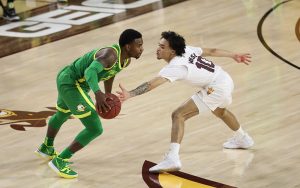 House (right), the son of former ASU standout Eddie House, gave the Suns Devils an offensive spark but was a key factor on defense, too. (Photo by Alina Nelson/Cronkite News)

House, a 19-year-old sophomore guard, made a name for himself with that defensive effort, compiling 72 steals in his two seasons at ASU, second only to Martin’s 75.

It was House’s offensive improvement, however, that became a major story for the Sun Devils. Coming off the bench, House put up 5.3 points a game, bettering the 3.9 points a game he averaged as a freshman. He was also the team’s best three-point shooter (minimum of 10 attempts), hitting 23 of 59 (39%) from behind the arc.

With so many potential departures, House figured to earn a larger role, possibly moving into the starting lineup, where he believes his offensive output will continue to improve.

Those teammates will not be wearing maroon and gold.

With House in the transfer portal, the Sun Devils also lose someone who had the opportunity to develop into a team leader as an upperclassman. With the team’s senior core departing, there will be a sizable hole to fill in the leadership department along with their production on the floor.

Outside of the disappointing 2020-2021 season, the Sun Devil seniors carried on the tradition and culture of winning that Hurley has brought to Tempe, which House and company would’ve been tasked to uphold.

“When people talk about culture, I think (Martin, Lawrence, and Verge) are tremendous examples of culture,” Hurley said. “It tells you a lot about someone’s character if you’re willing to step up to the plate the way they have – played good, winning basketball and been great teammates.”

As an underclassman, House’s energy and enthusiasm for the game didn’t go unnoticed by his teammates, who expected him to move into a greater leadership role.

“He brings energy every day,” Verge said. “It doesn’t matter if it’s practice or a walkthrough. He’s talkative. As he gets older, he’ll get better and better. I really respect him because of the things he does and how he carries himself. He’s a good player and a good teammate. He’s somebody you want to have on your team. He motivates you and does the right things. He doesn’t make any excuses and he goes hard.” 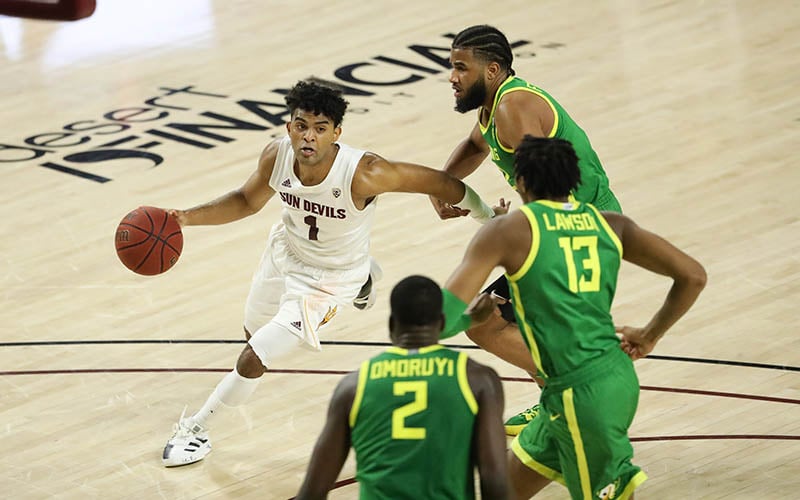 In his two seasons at ASU, House has been able to watch and learn from Martin, one of the best to put on a Sun Devil uniform. House believes he’s learned how to be a leader from Martin, although that leadership now will benefit another team.

“(I’ve learned about) being a leader and showing that you’re the best player out on the floor,” House said. “(Martin) is the top dog and that’s somewhere I want to be.”

Unfortunately for ASU, House and several others have likely played their final games as Sun Devils. The onus is now on Hurley to rebuild and regain the program’s momentum during his tenure in Tempe.

This is not a new endeavor for Hurley, who only four years ago had to find and recruit the core of a team to replace the one that entered the 2017-2018 season led by three senior guards: Tra Holder, Kodi Justice, and Shannon Evans. That team won 20 games and made an NCAA tournament appearance, the first for the Sun Devils under Hurley.

In the time since that season, Hurley has brought some impressive names into the program, including Martin and Lawrence, who were freshmen during the 2017-2018 season. Replacing those two and the others that are leaving will not be an easy task.

But Hurley is ready for the challenge.

“I have to identify qualities and people that I want to go to war with,” Hurley said. “(We need) guys who lay it all on the line with their play and their heart. We have an opportunity to reshape our team this offseason, and we’re going to work hard to do that.”

Boakye, the former Michigan State commit, stands 6-feet-10, 240 pounds and will bring much needed size and athleticism to the Sun Devils, whose lack of an interior presence was a weakness this past season.

“As I watched (ASU) play all season, I realized they are a great team but are missing a big presence inside,” Boakye said in a statement on Twitter. “I am excited to come in and fill that hole and impact winning right away.”