TEMPE – Arizona State wide receivers coach Prentice Gill and defensive backs coach Chris Hawkins have a relationship with each other dating back to when they worked together at USC. Gill was a graduate assistant while Hawkins starred in the Trojans’ secondary.

Now they’ve brought their Southern California synergy to ASU, and the results are paying off. Gill’s wide receiver room is stocked with talent and returning experience. Hawkins’ defensive backfield returns every starter from 2020 and has incorporated talented freshmen like Tommi Hill and RJ Regan. Isaiah Johnson, the Sun Devils’ top 2021 recruit, will soon join them.

The confidence and energy Hawkins and Gill have brought to the program is palpable.

“I think the room embodies the leader, and obviously I’m the leader of the secondary,” Hawkins said. “As all you guys know, I always have a chip on my shoulder. I stay with a swagger, I stay with my hat backwards. And I think that my guys take the personality of me, and I truly feel that way.

Gill exerts his imprint on the program by raising recruiting expectations each year. 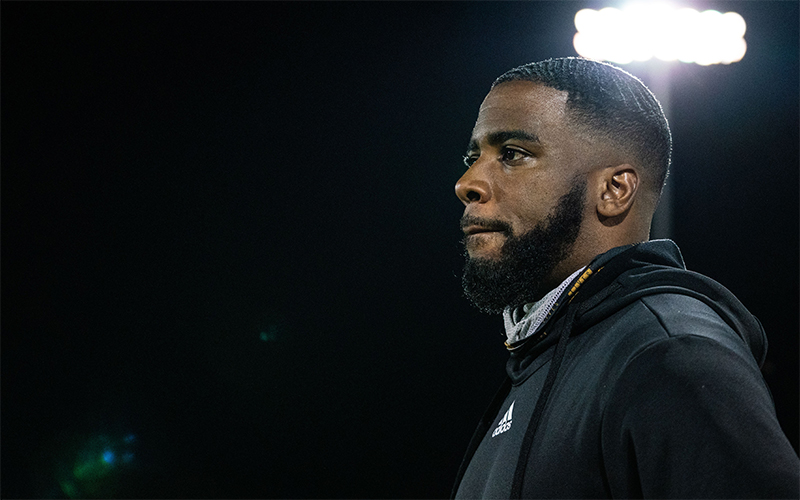 Alexander was no slouch himself, a four-star recruit from Washington. But with Gill and Hawkins leading the charge, four-star commitments are becoming more and more normal with each passing week.

Hawkins has been the primary recruiter for each of ASU’s non-kicker commits in the 2022 class, all of whom are four-star players. Gill was the secondary recruiter for Larry Turner-Gooden, a four-star athlete ranked as the No. 57 player in the country by the 247Sports Composite.

The two young assistants have also teamed up to recruit quarterback AJ Duffy, a four-star from IMG Academy in Florida. Duffy, the No. 108 player and No. 7 pro-style quarterback in the country, is set to announce his college choice on March 31.

If Hawkins and Gill can once again collaborate to reel in a special talent like Duffy, it will be yet another sign that ASU’s national recruiting efforts have reached a different level.

First-year tight ends coach Adam Breneman credited Hawkins, who like Gill is in his second year with the Sun Devils, for not only helping him adapt to the ASU program, but also raising the level of recruiting expectations for the entire Sun Devils staff.

“Hawk’s been great for me as a first year coach, because his first year was last year, obviously,” Breneman said. “Just being able to talk to him and pick his brain. He’s on fire right now recruiting, so it’s making me have a little skip in my step in the morning when I wake up, because he’s red hot right now. So he’s got a little bit of confidence right now, so I’m trying to catch up to him a little bit.”

When you watch defensive line coach Robert Rodriguez at work, it’s evident how much passion he has for his craft. And it works. The second-year Sun Devils assistant noticeably elevated the line’s level of play in 2020.

What’s his secret to success? Details. Rodriguez harps on drill work in practice, pushing his players to maximize every rep, even when repeating monotonous exercises.

“Let’s enjoy this s— a little bit,” he implored his players during a get-off drill.

Rodriguez said that his intent is to refine his players’ skills as much as possible. In a practice setting, players can work on their technique without consequence. By the time the ball is snapped in a game, it’s too late for them to fix whatever errors or mistakes still need to be ironed out. 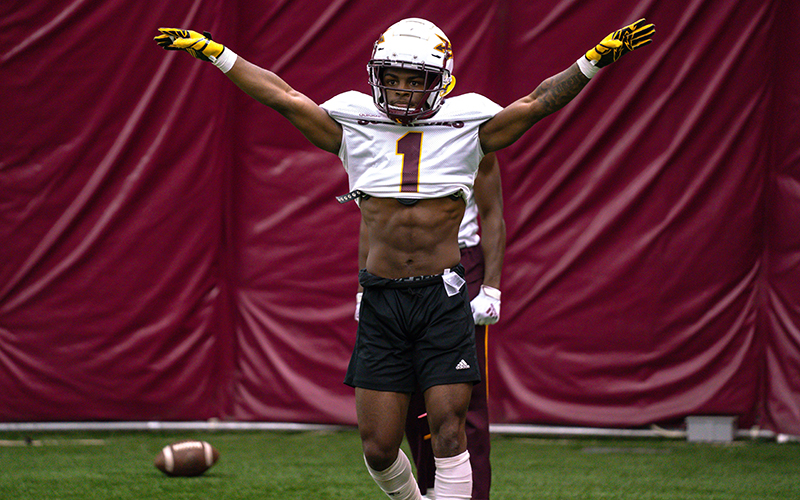 “The thing about good defensive linemen, I think sometimes we talk too much about them being athletes,” Rodriguez said. “And you forget, you’re right in front of the man that’s gonna punch you in the face. Somebody’s gonna hit you on every single play. And so you have to train your body to do things that are unnatural, to do them unconsciously. And so you can’t wait and say, ‘I need to get my hands up.’ Your hands need to be up. And if you don’t train them to do that, they’re not going to be there on game day. They’re going to let you down.

“And so there’s a lot of coaches that come from the philosophy of keep things fresh, switch things up. It’s like you got to entertain them. And what I’m trying to tell these guys is I can entertain you, but your muscle memory is gonna let you down on game day. You better not expect it to do anything but what you’ve taught it to do. And so you have to embrace the grind on a daily basis, because at the end of the day, when the ball is snapped on game day, your habits will come through for you, whether they’re good or bad. And if you’re going to be a great defensive lineman in our technique, which is very, very fundamentally sound, then comfort and greatness are on two different roads. They’re not on the same road.”

Rodriguez continued by saying that embracing discomfort and the repetition of essential drills is the key that separates elite defensive linemen from those who are simply average.

“And so you have got to get uncomfortable, accept that, embrace it, and understand that I’m uncomfortable because I’m doing the tough things that other guys aren’t doing,” he said. “It’s gonna make me great. Because they’re not willing to do these things. They might not even know that they need to do these things. But trying to be comfortable and having too much fun and saying, ‘Oh, we did this drill and this drill,’ it ain’t about drills. It’s about the consistency of your muscle memory when the ball is snapped.”

Much like Rodriguez wants his linemen to embrace habits that will set them apart from their peers, other recent hires want to push their groups to contend for all-conference honors and be among the best in the Pac-12.

Hawkins said he not only wants individual Sun Devils defensive backs to achieve recognition, he wants the group as a whole to build a reputation for excellence that will transcend its time at the school.

“That’s why I put everything into recruiting, because if you recruit good players, you’re going to have the best room. And I think right now I have one of the best rooms obviously in the Pac-12 and pretty much in the country right now,” Hawkins said. “And I think that the more talent that comes in here, the more precedent and defensive back-wise that this program can become.

If Hawkins can do something similar for ASU, the Sun Devils will have an excellent chance to match the team accolades (Pac-12 Championships, Rose Bowl and College Football Playoff appearances) that Lake’s Washington teams were able to achieve. 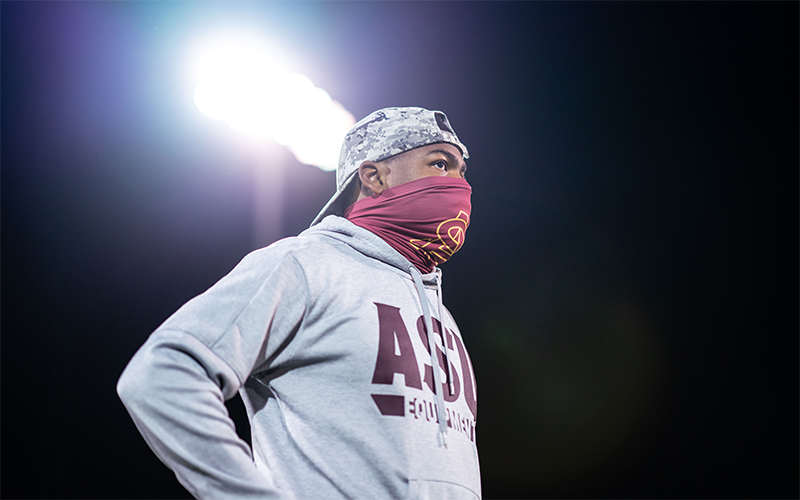 Defensive backs coach Chris Hawkins says he always has a chip on his shoulder and he uses it for motivation. (Courtesy of Sun Devil Athletics)

Breneman, who takes after Hawkins, said he too wants to push his group to be the best in the conference.

“Recruiting really good tight ends that fit what we want to do personnel-wise and that have great work ethic and want to be great and can learn the playbook and everything like that. So there’s a few different factors to it, but a big part of it is recruiting.”

If ASU assistants like Hawkins and Breneman continue to raise the level of play of their position groups while bringing in top-shelf recruits, all it will take is an elite-level quarterback for the Sun Devils to be able to compete with the best teams in the country.

Whether it is Jayden Daniels or a new QB that follows him like Duffy, a foundation is being laid for a top signal-caller to come in and take the Sun Devils into college football’s elite tier.