PHOENIX – The sports community across the U.S., and in Arizona, are condemning the violence toward Asian Americans, after 21-year-old Robert Aaron Long shot and killed eight people in the Atlanta area, six of them Asian American women, on Tuesday.

Arizona Cardinals quarterback Kyler Murray posted a picture to Twitter with his family, ending his tweet with, “I don’t understand the hate.” He is both Korean-American and Black.

The Arizona Coyotes issued a statement Thursday, saying, “there is no place for hate, xenophobia or racism in our society” and “our diversity is our greatest strength and we stand united with the AAPI community.”

Murray’s tweet and the Coyotes’ statement in response to the violence on Tuesday comes at a time when violence against Asian Americans and Pacific Islanders is increasing. According to Stop AAPI Hate’s National Report, released just hours before the attack, 3,795 incidents were reported to the Stop AAPI Hate reporting center. The majority of these incidents, 68.1%, were verbal harassment and another 20.5% were shunning incidents, defined as the deliberate avoidance of Asian Americans. Physical assault made up 11.1% of reports.

“These are instances of hate that occur when people are just going about their daily lives,” said Melissa May Borja, assistant professor at the University of Michigan and researcher at Stop AAPI Hate. “And even though they range in severity, they’re all together creating a climate in which Asian Americans are fearful. And feel very concerned about their safety and ability to move freely in public.”

The outpouring of statements condemning the violence came from across the sports community, not just in Arizona. Jeremy Lin, the first Asian American to win an NBA Championship, and Younghoe Koo, one of the few Asian American players in the NFL, released statements expressing the sadness they felt at the shooting. Olympian Alex Shibutani tweeted that “time and time again, we see that racism, xenophobia, scapegoating, and misogyny can have fatal and tragic consequences.”

ESPN reporters Pablo Torre and Mina Kimes, both Asian American, spoke out about the increase in violence against the Asian American and Pacific Islanders community on the show “Around the Horn.” Torre described the murders as “the latest step in a horrifying year” that, to the AAPI community, has been marked by hate crimes, bigotry and racism.

Kimes echoed Torre’s statement, but added that it is important “to remind our political leaders that your words matter. Your acknowledgement that this is happening matters, and your support for the Asian community – my community – it matters a great deal, especially at a time like this.”

Jinna Zeng, an Asian Canadian Pacific Islander and Arizona State volleyball player from British Columbia, said she has experienced racism numerous times, especially racist assumptions of her athletic ability because of her race.

“Something I faced (was) for someone to compliment me, but end sentences with ‘for an Asian,’” Zeng said. “But I think all of that just motivated me even more to reach my goals and do what I want to do.”

Zeng said that education and reflection are two important aspects that people need to take part in, to support the AAPI community.

“And acknowledge, even if you have done things in the past, it’s fine, moving forward, to do better. Be open to accepting different things and accepting things really how it is,” Zeng said.

Last summer, as social justice movements happened across the country, the sports world responded. Portland Trailblazers star Damian Lillard marched in a protest in response to the killing of George Floyd. Washington Mystics guard Natasha Cloud joined a similar protest in Philadelphia last summer, and wrote a passionate piece in The Players’ Tribune titled “Your Silence Is a Knee on My Neck.” Sports — athletes, coaches, organizations — can use their platform similarly to draw attention to the violence against the AAPI community.

“I think that with sports being such a huge thing, and having a large audience and influence on people, it’s a really good way to educate people and make people more aware of the world right now,” Zeng said.

Borja, who’s a researcher at Stop AAPI Hate, said it does matter when people with a public platform speak out against racism.

“A number of people I know have told me that they began to pay attention to this issue when Jeremy Lin spoke frankly about his experiences of anti-Asian racism during the pandemic,” Borja said. “I think that there are a lot of opportunities for people to think about this issue in a new way when their favorite team or their favorite sports heroes are pushing for justice on these issues.”

Joon Lee was born in South Korea and moved to the U.S. when he was two months old. Lee is now a staff writer at ESPN. He said he recently spoke with another Asian American in sports, and they talked about the lack of national coverage of the hate crimes committed against Asian Americans.

“We were kind of saying that, you know, it’s going to take someone literally dying in order for people to start really caring about it,” Lee said.

Then, that happened on March 16. Lee said many issues that Asian Americans face, especially racism, have been downplayed or overlooked.

Lee didn’t attempt to compare the vocalization of the AAPI community and sports giants, like Wade and James, to the strong voice of the Black Lives Matter movement last summer. “I don’t think it’s necessarily a productive thing to do,” he said, but he added that hearing people speak up at all is a departure from what normally happens.

Diversity, especially in the sports industry, is a constant conversation. Lee said that he is working to broaden the perspectives of publications and inform people in a way that can create change over time.

“(I am) making sure that [Asian American journalists] are empowered to tell authentic stories, and not try to whitewash conversations that are difficult, but are necessary to be had in the first place.”

Zeng is on a similar mission to empower athletes like her.

“I think I can inspire [other Asian Americans and Pacific Islanders] and show them that we can –it’s possible, so possible for anyone to do whatever they want, even when people make assumptions, or comment on your potential and abilities based on your race,” Zeng said. “Just another realization that that’s not true. That’s obviously, those are racist comments. It’s just not reality.” 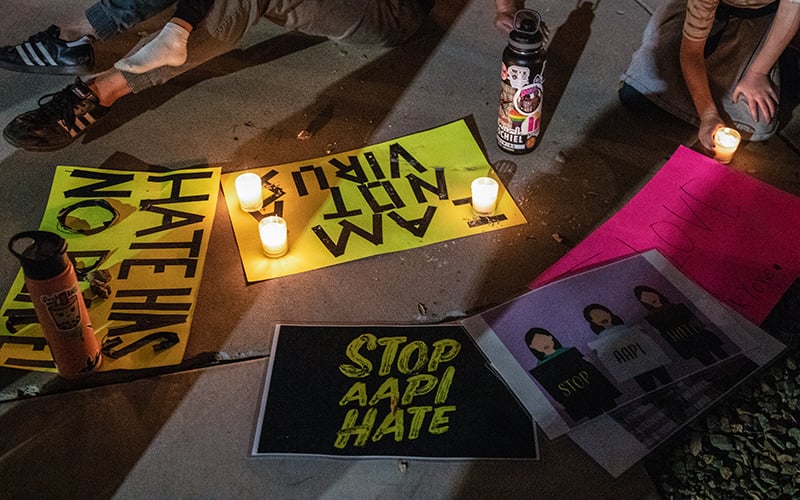 For most, said Lee, it’s a burden and an extra task to make sure that those behind you are also given an opportunity. Lee describes it as a burden and a privilege to have the opportunity to help others. Being Asian American also provides him a different world view.

“That outsider perspective, I think, just gives you a different view on how the sports world works. And I think it helps me kind of uncover stories that other people wouldn’t necessarily think twice about,” Lee said. “So it’s kind of a double edged sword in both the positive and the negative way.”

Members of the Arizona Asian American community have organized a candlelight vigil on the Arizona State Capitol lawn, the Arizona Republic reported. The vigil is set for 6:30 p.m. on Friday.

“It was just an idea from a place of healing, and we want our community to heal together,” Leezah Sun, a community activist and one of the organizers of the vigil, told the Arizona Republic.

Vicente Reid, CEO of the Arizona Asian Chamber of Commerce, is planning a vigil next week in Mesa, a city with a high concentration of Asian American-owned businesses, he told the Associated Press.

“I think there is this whole outlet of this younger generation who’s passionate and has the energy. They just need someone to step up and lead them,” Reid told AP.

The Stop AAPI Hate National Report showed AAPI women as the target of more hate incidents than men. Borja notes that women are at the forefront of this conversation for another reason.

“I think it’s really notable that women are at the forefront of calling for change,” said Borja.

Borja has a plan to help the AAPI community, which includes donations to AAPI community organizations that are helping the most vulnerable. There are other things that can be done aside from donations.

“I think at the very least Asian Americans right now are really sad, they’re hurting, they’re grieving,” Borja said. “They have long felt invisible, and to have their pain and suffering be made visible through a public acknowledgement matters.”